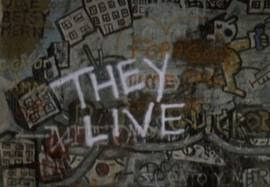 True enough, They Live is somewhat campy. It's John Carpenter. Of course it is. Campy isn't necessarily a bad thing. Not a fan of zany, but a little camp is okay in my book.
They Live is also chilling, even more now than in the eighties, at least in my opinion. You don't have to be a conspiracy theorist to know we're living it on the edge of it, as I type this entry.
I don't recall reading "Eight O'clock in the Morning," the Ray Nelson short story the movie is based on and I haven't found a copy of it yet. though I hope to soon.

I watched the movie again this week. Almost immediately afterward I saw a commercial for a new family car with the latest in entertainment systems.

What the fuck, humans? Don't our children spend enough time staring at screens? Don't we?
I get that long trips can be boring and entertained kids are easier to travel with. Mom's on her blue tooth, the kids are glued to the screens as they travel through a world they're completely isolated from. I could be wrong. Maybe they're going camping. I'd bet the kids couldn't find the way to their own school. But they likely know Lady Gaga fell on her ass twice.

Nothing about this feels right to me.

I know this theme of sleepwalking humans has been explored many times, the parasitic elite few suppressing the masses.
I'm sick of caring about it. But I can't stop. Stupid humans. Poppets tell me to be patient, that humans are still very un-evolved. And not stupid, just young and silly.

Near the beginning of They Live, the protagonist, Nada, says he still believes in America. He only wants a chance to earn a living. Americans didn't lose their freedoms or their money. We gave them away, handed them right over for something shiny and a false sense of security. If we're asleep, it's because we swallowed the pill that was offered, with a nice glass of shut the fuck up.

I'm going to read to my son now, from a book, which doesn't require a power source owned by vampires.

Labels: THEY LIVE, We sleep

I often question if humans will grow up in time. Or if on waking from the sleepwalking, they will be too stunned to act, too ignorant to move forward of their own volition. Time, of course, will tell.

Me too, Melissa. And you're right, time will tell. I feel angry and powerless when I watch TV or even see news on the net. I'm not ready to put my head in the sand, so I have to be satisfied with what little I can do.