I've begun to make October poppets.  It's a practical thing in that it gives collectors time to plan.  I have to think about what I spend my money on and plan ahead.  I get that, wholly.
But it's also a thing of the spirit.  I've said time and again that this desert summer is hard on me.    I start to dread it in April and it never lets me down.  This year was no exception and even harder.  The air got so hot that I couldn't save my little garden, even with shade and water.   The brutal desert summer. Yes, I'm still in it and it won't begin to cool until late September (if then.)
But at least I can now imagine relief coming and my October work leads to October thoughts, which are like a cool blanket of comfort against the oppressive heat.

I want clouds!  I want rain and grey and gloom!  Because against a steel sky, an idea shines like a bright yellow balloon.  You see, it's not that I have anything against the sun.  I have something against too much sun.  Like too much of anything,(rain or snow) it can have us begging for relief.
Humans need change.

And those of us who feel sadness or fear don't feel so alone in grey as we do in an over bright place filled with leather skinned tourists in pastels.

The summer sun.  That stone I talked about last time that for me has become permanently linked with my worry about the environment.    I mentioned that sometimes I wake with this fear.  Sometimes I take it to bed with me. 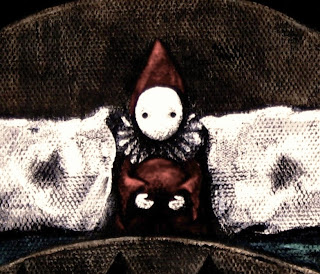 Coping with our fears isn't easy.  You're probably sick of hearing me say I'm writing a book about it.  I'm sort of sick of saying it too.  I want to get the thing done!  But the truth is that this is easier said than done and I chip away at it as I can, trying not to let the frustration of no-time-after-the-day-job make me give up.
But that's another issue.

I told you that when I wake up with these fears - fear for the planet, for us silly humans, fear of aging and dying - I talk myself down, make a plan for the day and focus on that.
And on other people.  Something to do and love.

What do you do?  When you're down, when you get discouraged, depressed or anxious.  What are your very best coping tools?  This is a good time to share.  Let's help each other out.

What works for you?  No answer is too silly.  I promise.  There are those who read here that could use the help and friendship right about now.  (Those who write here too.)
Posted by lisa at 11:04 AM 10 comments:

The Stone in the Desert 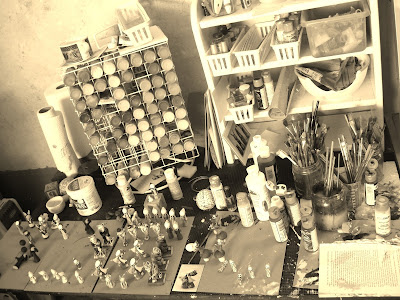 I wake with a stone of fear in my gut. It's a familiar stone. Hello stone, I think. It doesn't answer. The stone is a metaphor. But the fear is real enough and I'm not happy at its return. I don't know what time it is, but I can tell by the light it's earlier than my 9am Sunday alarm. I haven't moved yet.


I take a quick inventory of what hurts. My jaw, mostly. But not too bad. Four hundred, so far, saved for the cure that costs nearly two thousand. I can live with that most days. Once in awhile it will keep me in bed until I can get to the dentist with every 'extra' dollar I can earn from now until then.


Today seems to be one of the days I can live with it. That's good. There's a cat at my feet. I can feel it, but I can't tell which one. It makes its fuzzy way to lick my face. Hello Soosi. And there's still a cat at my feet. That would be Shoni. These two work as a team.


As soon as I get up, others will come running and for five minutes or so I'll be busy opening cans and wondering stupidly once again at how I ended up with this herd. Then I'll make coffee and start on the list I made last night of stuff to do. Poppets that must be sculpted, or painted or packed. School paperwork for Orion's new year. Notes on judging a podcast competition. Something to do is good. Takes my mind off the stone.


I open the back door to let a cat out (and another in) and hot air rushes in. I get a quick glimpse at my failed garden. This year, the shades didn't save it. Once the air gets to a certain temperature it eats everything. And the soil bakes the roots. Maybe if I'd spent more time... but there wasn't any to spend.
Maybe I'll try again in fall. But likely not, because this is the year we focus on leaving the desert. And that means simplifying.
The stone. I know it so well. The fear has been with me since I can remember. I seem to have always had this sense that things were going horribly wrong with the world. I managed to distract myself most of the time – mostly with trying to make good art, but sometimes with screwing up my own life and cleaning up the messes.

So finally, it seems I've at least learned not to make new messes. There's that, but I've also learned that this desert has become toxic to me. The heat is too much. I can't help but think that eventually it will be inescapable. And the wealth. Too much here. So much blind materialism. So much vanity. I want to be with people like me. By like me I mean well-meaning idiots, more interested in learning than acquiring.
I want to be with other kids who see the monster. Or at least I want not to be surrounded by aggressive denial. Where are they? I don't know. There may be others here in the desert but I can't find them. I'm too blinded by the heat. And the bling. And dentists with leather couches and marble counters who won't take half now and half later.
In the meantime, there's only one way to deal with the stone:
Things To Do and Love for Others.
I don't know which one this entry is. Possibly both. Possibly neither. But I do want you to know I'm thinking of you. I thought it might be worthwhile to let you know what's going on with me.
Tell me what's going on with you. Are you afraid sometimes? Do you have a sense that humans are on the brink of royally screwing themselves? Are you hopeful? Busy with your own dental issues?
I haven't forgotten you. Things have changed since I was writing here every day. I've never fully recovered from Ye Olde Great Recession. So I spend a whole lot more time working and, unfortunately less time writing, even though I've begun to figure a few things out.
I'm still here, being your artist. And wondering how you're getting on
Out There.
Posted by lisa at 10:18 AM 11 comments: