Phillip sent these two photos. They have nothing to do with one another, really. Poppets on a grenade do what poppets on anything do. They give us a different look at things we might take for granted. Like grenades.

Cats need no reason or explanation.

Thanks for your emails. These are hard days. I have the tenacity of a mule. I consider it one of my better traits. Better days are coming. But sometimes we have to slog through the bad ones. I'm doing it. I'm not digging it, but I'm doing it.

Possibly the lesson here is that indeed, things work themselves out in the work. When I find out, I'll let you know.

In the meantime, I'm off to the WFC.

A glimpse into the bucket of truth

I took these with my phone on the drive to Passadena to pick up art. We drove toward the column of smoke from the Palm Springs Fire.

It became apparent as we neared the area just how large the fire had become. If you haven't seen or read about this, you might want to know it was deliberately set.


I've read several of Leonard Shlain's books. Here's his take on a mystery many of us have pondered.The Blog Leonard Shlain: Why Bush Smirks The Huffington Post

This October hasn't been a good one. We've had a lot of events to cope with, including and especially the drowning death of our friends' toddler, which has left us all changed. Now, despite our best efforts at business as usual, the people in this house are pretty ragged and shell-shocked. Last night, I walked out of the astounding mess our house has become and into the astounding mess my studio has become and decided I didn't have the strength to put a match to it, much less try to set it right again. It's been a month of questions and doubts about the very core of my efforts.
It's not so easy saying so here, and likely not the smartest thing I've ever done. Generally these sorts of posts are better done through the safe filter of time. Raw questions and hurts tend to make people uncomfortable. But the truth is, right now I feel like quitting.
Please don't try to say helpful things. Anything you might say I've probably already said to myself. I've given this some thought, and I'm fairly certain that I'm posting this because (in my twisted way of thinking) a little brutal honesty is required. I know you've probably felt like quitting too, and didn't. That's help enough.

Orion continues to be the little willow-the-wisp this dark month. We follow his light and are often grateful for it. I'll be leaving for the World Fantasy Convention on Thursday, because, well, that's my job. Then I'll go north for some winter air and to see a friend who wisely reminds me that the worst stuff seems to work itself out in the work.

Don't forget to send a contribution to Link TV. It matters. A lot.

Tonight Orion will dress up and knock on doors and ask strangers for candy. We won't think about what any of it means. It doesn't matter, really. I'll wave from the street and remind him to say thank you. Despite all, Halloween is a good thing. I hope you have a good one.
Posted by ravyn at 2:54 PM 5 comments:

This photo is perfect and requires no title.
More POT in Chicago from Cliff and Glen.

If we get a reader spike, we'll have some interesting demographics for Oprah fans...


Summer may actually be over. I brought in some freshly painted Poppets from outside. They were very cold. Poppets are made of resin and marble chips. Marble gets very cold and has its own sort of resonance and for some reason, these seem like good traits for tiny sculptures. To me.

Ravyn sent me this Unrest in Pieces about the Bodies exhibit. It is disturbing, but doesn't make me want to see the exhibit any less. It's good to be awake, but not always easy, which could explain why so many sleep.
Posted by ravyn at 5:45 PM 6 comments:

I watched The Prestige (2006) last night. It was good. No spoilers, not to worry, but there was one scene in which a magician was extremely bothered because the logistics of a particular act left him backstage at the moment of glory---the applause and the cheering (it was a very good trick).
I sympathized, somewhat. As a visual artist, I'm acutely aware that my best artistic moments are spent...alone.
Art isn't created in a vacuum. In a busy studio, where multiple projects in different media are always in process, things happen. Often. Deep insights, clever improvisations, spectacular feats of slap-stick, on-your-feet thinking occur with fair regularity.
and
There are occasional moments of true brilliance. Sometimes.

I generally like the works that emerge from the sometimes chaotic mess I call my studio. I generally enjoy showing the art to people. Still, I'm constantly aware that what the public sees is the product. They never really get to see the show.

Music today included The Eraser, by Thom Yorke (of Radiohead). My first listen tells me there is more to be discovered in subsequent plays. Good stuff.

I need to see the Bodies exhibit. Soon. (www.bodiestickets.com) . Hmm. Who do I know in NY?

I'm currently reading Cigarettes Are Sublime by Richard Klein. I'm always reading at least one book. It rarely occurs to me to mention it. I'll try to be better about that. Most of the books I read are worth mentioning.

We swam today, Ben, Orion and I. Diving into cold water (as I imagine running in cold air, skiing, or whatever else you can think of that involves cold and movement) seems to be an effective deterrent for fatigue, sloggishness or the plain old fucking blues. It slaps your inner child's butt and says...'you're alive! So... live!'

I have to say I recommend it.

Blogger ate the earlier version of this post, which was longer and more colorfully written. This one is shorter and somewhat more to the point---so, good for you. I'm attempting to post a photo of a Poppet wedding couple I made this week. (Hi to Steve and Kelli.) If it doesn't work, I'll email the photo to Ravyn, who can add it to this post while I'm sleeping three hours earlier than when she wakes tomorrow.

I recommend The Prestige. Good stuff. Good director, good cast. And David Bowie as Nikola Tesla. ok. That's just too nerdy-cool to miss.
Posted by lisa at 12:37 AM 9 comments: 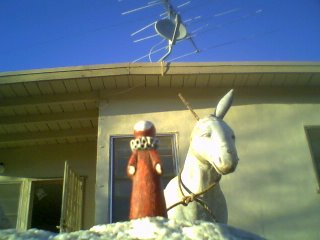 POT at the Carnival--One Poppet's Story in Pictures

---dedicated to all those brave souls who've come to appreciate the dynamics of rides, physics and corn dogs.

P.O.T. in the Florida Tide. Pete sent this in via cell phone.

Back in the desert, Orion and I made giant glowing eyeballs for the front yard.

Today's water temperature: 71F Orion must, due to lack of body weight, soon retire for the season.


Todays Bennism: (after having accidently set off a defective electronic skull in the halloween dept and realizing that after ten minutes we could still hear it from across the store)

"That was even more annoying than I could've possibly hoped for."


Sale is here, tell your friends, not your cats. Lisa's Very Big Halloween Sale
Posted by ravyn at 6:44 PM No comments:

Is up and running. Yes. There are Poppets...


Have fun in there!!

Thanks Ravyn. Thanks Jane. Thanks Ben. Thanks Orion, for the cookie.

Really, is it October?

I have more photos from POT at the Carnival, and some interesting poppet photos from readers. Currently my computer is misbehaving on this point to the degree that I've called in an expert. Until he gets here, I am to muddle through and resist the urge to photograph said computer at the bottom of the pool.
After stomping it for hours on end.

Orion, Ben and I are still swimming. We have decided to stop looking at the thermometer. I'm not considering heating the pool --- I don't really like heated pools. But maybe a hot tub...


Thanks to David K and daughter Alia for some interesting fossils from the shore of Lake Huron. You guys rock! Ok. That was corny. But the rocks are cool.

Tentative Poppet nods to Dove for a possible waking moment. Even if their current ads are more clever marketing than company philosophy, the ads promote a broader concept of beauty. There's an interesting Article by Alicia Clegg that rings true.

I'm all for promoting a more intelligent concept of beauty, one I was nearly convinced could only be gained in art school. Dove's new Intensive Firming Lotion smells wonderful and feels good. Still, I don't forget the fact that if something could actually effect a molecular change in skin, it would be classified as a drug. No exceptions. See FDA.

I'm looking foward to some studio time. Not to come for a bit. Sometimes we tool along and other times we deal with the sorts of things best viewed through the filter of time. I could write them, couch them in fiction in the way that writers do. I could say, "it is what it is" and "this too will pass" or "monkey out of nowhere, " (not that one, really) but mostly, I count on that most times things tend to work themselves out in the work.
When the work is good, everything else can be fixed. Well, it seems that way to me.

So. Is it tomorrow? Tough concept, this one. Orion is gaining on it, I think... 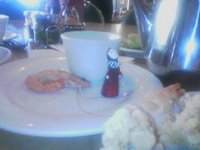 Please forgive my lack of posts recently. It seems I've been working against a current of events, mishaps and life in general to get things up. We have lots more POT at the Carnival photos.

For now, here's a quick snapshot from Chinatown, day before yesterday.

Poppets on tour visited the Dark Caravan carnival, which currently resides in the home of Howard and Jane Frank in the Washington, DC area. While Ben and I made adjustments to the roller coaster, I sort of turned them loose to explore. Here are some images of their adventures.

POT: The Sky Is Cracking!

I'm back, trailing photos behind me, which I'll try to put up soon. The poppets had a very interesting time at the carnival.

And yes, poppets will be here on Oct 10, along with other strange creatures.


Your Lisa is very tired, but soon will wake, glad to find herself in October.
Posted by lisa at 11:15 PM 1 comment: