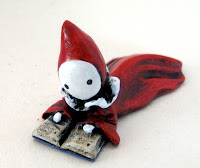 I'm an artist. Before I was an artist, I was a reader. There were always books around me. In fact, I believe the best of my education happened right on my back porch on Saturday afternoons. I love stories of all kinds.
Once I noticed I'd become an artist, it didn't take long for me to see that my art was telling stories. Soon after, other humans noticed these stories hidden in the art. And writers started to write them in words. Good words too, because the writers were really, really good at writing.

Neil Gaiman called the the things I made "frozen stories."  He's written seven, so far, including "Harlequin Valentine."   Harlan Ellison called me (lovingly) a monomaniac.  And he was right.   Is right.  Much of my work is about looking at humanity  from a certain odd point of view. 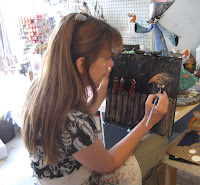 After a number of years, it became apparent to me that I was immersed in the art, the stories and the process of making the art. I'd found a love, for life.


Eventually, it didn't matter so much to me what medium I used. I've never settled on any one and have no plans to. Sculpture, assemblages, verse, paintings have been my constants in a life of changes.
Some of you have traveled with me. Some of us wave as our paths cross occasionally.  It's been twenty years since I climbed out on the proverbial limb and became a professional artist.  I've made a lot of art in those years.
Making things taught me about being an artist.  Being an artist taught me about being  human.
Now I want to gather some of these stories into one place. I want to make a book. I want the book to blur the boundaries between words and images. I want to make a book that blurs the boundaries between art and book, some book-thing that's 2 ½ dimensions.
And I intend to figure out what to call it, eventually.   The working title is "I Fear for Humans."
These stories mean something to me. I believe they mean something to you too. If you know me, or you know my work, you know you're already part of it. 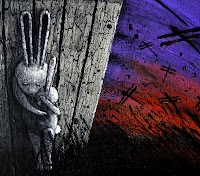 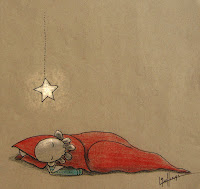 I thank each and every one of you who've supported and encouraged me these years. Many of you have given homes to my creations, large and small. Even more of you have poppets. Some of you have Poppet armies that defy reality.

Some of you have sent money just in time to pay the electric, or buy the “good” baby formula. Some have financed equipment or travel. Some have consistently reminded me that my work mattered to you. To all of you, I'm deeply grateful.
My hope is to make a book that's bigger inside than out.   There will be stories told in in my own strange alphabet.  And there will be poppets.
There will be a hard cover book, and a limited edition one that comes in an assemblage.  Yes, a Strange assemblage.  But if you're here, reading this, I know it's the sort of thing that will make you smile more than once.
I'll need your help to make this happen.  When I launch the Kickstarter project, I'll need you to help me spread the word.   I'll be offering some really great rewards for donations.
In a few days I'll list some of the rewards here.  In the meantime, tell me what you think.  I want to give the project the best possible chance of success.  Your opinions and suggestions are valuable to me.  You can post here in blog comments or you can reach me at harlikn7@aol.com or on facebook.