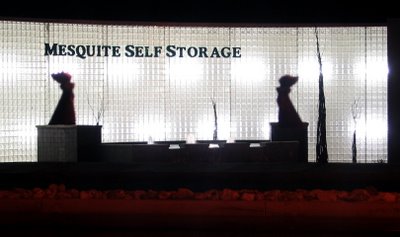 Pete and I took this photo one windy night at a very busy Mesquite/Gene Autry intersection with headlights whooshing by. I can't pass this place without thinking of fifties science fiction cryology, gleaming cities and silver cars that zip by on currents of air, leaving nothing behind but water vapor.

For now, I'll refer to it as the year I learned to swim. But with you, my loyal comrades, I'll share
What I learned This Year:

1. That the truth sits in the creamy center.
2. That if you can define the question, you can find the answer.
3. That real changes are accomplished one at a time.

My New Year's resolution is to enjoy the moment, then see what happens.


I'd love to hear your thoughts on the coming year. I thank you for being part of this one and I wish you every good thing. 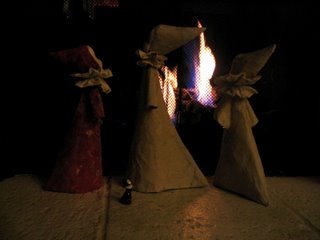 Time is on my mind.

Not lack of it, or schedules, but the nature of it.

Something tugs at my edges, gently, relentlessly.

I can't read in moving cars, nor on the train, without motion sickness. But I can read on planes. It's easy to forget sometimes, that we're always moving through space and moving very fast.

I try to imagine being a dog, for just a moment, with my head sticking out of a car window, travelling fast, going I don't know where, watching objects flash by out of context, without attached values and histories and without knowing the car and the world are hurtling around the sun or that I'm moving through time.

Present in each moment as it comes.

Jones carbonated candy is weird--at least the Fufu Berry flavor is, and oddly addictive, at least while the tin sits in front of me. Still, once I leave this desk, I don't know that I'll have another. I'm beginning to feel as though I drank a cup of warm cola.

This might be a good night to rewatch Primer. But really, I'd be better off with My Name is Earl. After all, the muse needs variety. 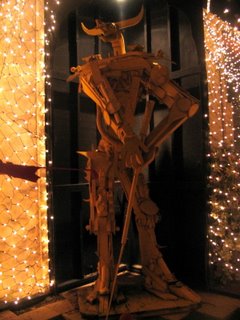 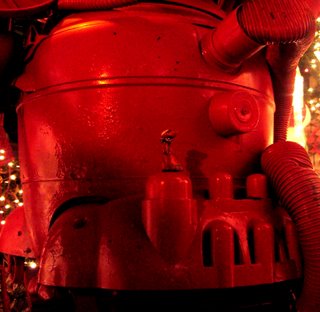 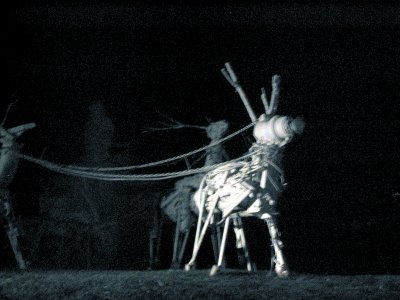 These photos were taken at the home of Kenny Irwin, a Palm Springs artist who likes making giant robots from found objects. 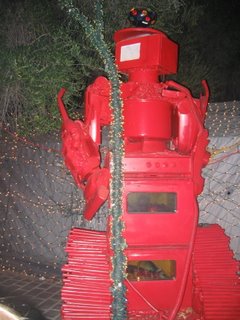 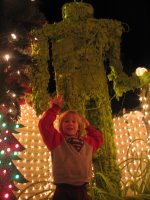 It's afternoon now, but cloudy, so still seems early. Mostly I think I'd be content to read with Gurtie purring on my lap. Later,no doubt, Christmas dinner leftovers will beckon. Currently I'm reading Collapse - How Societies Choose to Fail or Succeed -by Jared Diamond (Guns Germs and Steel), The Fabric of the Cosmos, by Brian Greene, and a collection of short stories by Elizabeth Bear called the chains that you refuse, which make me hope for a chance to talk with her. I especially liked Schrodinger's Cat Chases the Super String.

This holiday season always forces us reflect on the year and think about what comes next.

..which is precisely why I like St. Paddy's Day better. By then, all our New Year's Resolutions are not only broken, but forgotten, along with most of the guilt.

A few hours ago we stopped doing Christmas-Eve stuff, Orion and Pete and me, and put on our coats and got in the car and drove up the mountains. We went around curve after curve, up and up to a spot where home is a tiny sprinkle of lights and the sky is darker and the distant stars look milky---a place where you can stand in the quiet air with a quiet mind and look deeply into that vast space.


I wish everyone a merry sense of wonder. 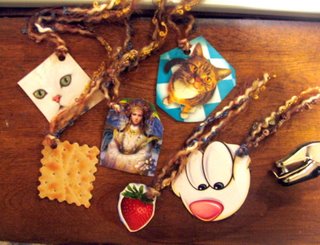 Not
everything
has
to
come
from
a store...

We mangle boxes that would normally just be thrown out. It seems not a terrible idea to keep a pair of scissors near the trash can for that, and for threatening things that try to escape before trash day.

And occasionally, it's a fun thing to mix ginger ale with grape juice, share it with a kid, and go searching together throughout the house for pictures just right for gift tags.

Thanks everyone for your birthday wishes and gifts. You are too cool. RRNN--Very nice (see his poem in comments on the previous entry.)

Soon all this holiday activity will be done. Then it will be time to show you something really scary.

Until then, farm wuzzies.
g'night
Posted by lisa at 8:30 PM 4 comments:

Midnight at our house

I have now decided that what it takes to hand paint 123 Little Red Poppets to look exactly the same is:

1. many hours
2. the mind of a serial killer

The many hours I'll do. Ok. So I fudged a little--took some liberties, painted them slightly differently from each other.
Not terribly, but slightly, e.g. dolphins. Dolphins all mostly look alike to humans, but different to each other.
And, likely, vice versa.

Owww. My back. Funny. It's the tiny detail stuff that gets me. Not the lifting of the wiggling 4 yr old, or diving, or moving of a bookcase I know should've waited for the Pete unit.

Before I forget, while I'm whining about the pains of artists... We often have problems with our hands getting dry and itchy from the work. I discovered recently that the Gold Bond foot cream contains urea, which is a very effective ingredient used to treat serious skin conditions. Works great for 'artist claw.' Really great. My hands hardly look like artists hands at all. I've moved up to fisherman, or farmer.

Anyway. One hundred twenty three poppets are ready to march out the door tomorrow, the last of the winter sale shipments. I don't mind painting them, really. Eventually, the Little Red Poppets will be painted by others (good, hand-picked others) and will say 'SlaughterHouse Studios' on the bottoms instead of my name. It's the way things go. Still, it's better that I've done lots of Little Red Poppets on my own. I know them. They will always be mine.

Ok. I'll admit it. I do have the quiet chuckle of a serial killer at times.

And painting poppets can provide time to think, and listen to music like the new "ecdysis" by Miho Hatori, who was once half of Cibo Matto. This album is, in my mind, somewhere between Cibo Matto and Bjork, which, in my mind, is just fine.

This household runs late. The kids are asleep, but midnight means time for food, The Daily Show and The Colbert Report. 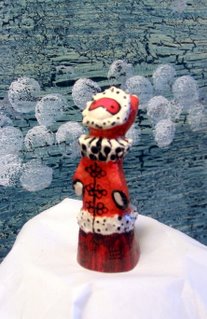 I suited this Little Red Poppet up in a safety orange parka. Soon, it will accompany our friend Lawrence to Equador for a mountain expedition.

We wish them both wonderful adventure and a safe return. And we hope for photos!


I'm working extremely hard, getting everyone's orders out in plenty of time for the holidays.
I've come to realize that learning to be an artist does nothing to prepare one for the rigors of running a mail order business.

wow. sheesh. This is very involved stuff. Possibly there's somewhere to learn how to do this other than personal experience. I believe (no time to search at the moment) that Lillian Vernon wrote a book about it. If memory serves, it's more of a memoir than a how-to book. But if anyone would know the in's and outs of it, she would.

There's something to be said about learning your own way from experience. I'd have to say that each time I do this thing---have a sale---I learn more about it. And, of course, learn that there's more yet to learn.

So far though, it's the sort of Santa Claus aspect I like best. Probably it seems silly, but I like reading the names and addresses from all over and wondering about the people who will get the packages. I like putting a note in each one. I like sending the good wishes.

Still, I know when it's all done and the last box leaves, I'll be glad to clean things up and have a good massage. And some chocolate. And several hours of tivo'd entertainment with my feet up. 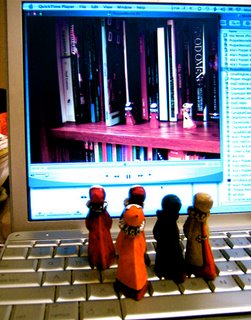 David Kirkpatrick and his lovely daughter Alia (who is nine) have made a Poppet movie, called Book Tour. It can be found here: www.lisasnellings.com/blogger/poppetmovie.mov (yes, there may be a bit of ratty Gaiman in there)

and is now up at: YouTube - Alia's Poppet Movie

They did a lovely job. 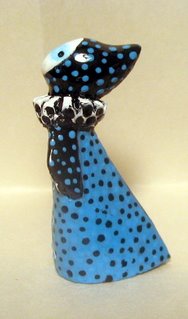 The Winter Sale is still going on until Saturday. Mostly there are Poppets, but some other nice things too. Lisa's Winter Art Sale

And Ravyn, I've learned, has been doing a bit of painting as well, on tiny, delicate little models of horses. You can see what she's up to here:The Anti-journal
Posted by lisa at 10:50 PM 3 comments: 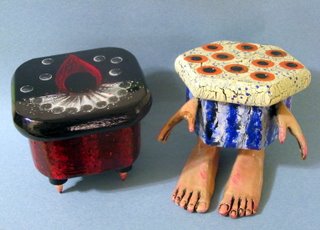 As of this Saturday afternoon, the Lisa's Winter Art Sale is open. We're still listing things for the ebay auctions so feel free to have a peek and check back later for more pieces. (I see Aubrey put something up too... ...sheesh)

Orion has been going to Yoga classes with Aubrey on Saturday mornings. This morning he decided, once we got there, to whine and cry and cling. So we left. But before we got out of the parking lot, I realized that this wasn't what I wanted to teach Orion. I told him that we wouldn't leave. We'd go back upstairs and sit together and just watch the class.
We did. After about twenty minutes he was tentatively joining in and by the end, we were both stretching and being trees and starfish.

My first impulse isn't always the best, but I'm working on it. I can teach him, when in doubt, to at least show up and see what happens. Baby steps, for both of us.