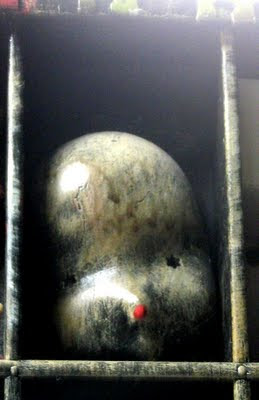 I feel lousy today. Miserable. I carry on, getting kids where they need to go, getting work finished. I did miss an appointment I didn't want to miss. Once, a few years ago, I spouted off in a rant to someone I cared a great deal about. I told him the things I hated about him. It was a litany of what I saw as character flaws, with a list of ways he made me feel awful. It was blurted out in anger, it was cruel, unkind and withering. At the time I was surfing on my own emotions. I felt wronged and justified in my lashing out. I was wrong about that. I've felt ashamed of this thing many times since, but never so much as today. The tables were turned you see, and I was the recipient of such a list.
I was the one guilty of heinous crimes, missteps and misdemeanors. I had to take a hard look into an ugly mirror. And I had it coming.
I think that we don't always understand our own intentions. Sometimes we don't know we're flying blind until we crash into something. The something might be a truth about ourselves invisible until impact. I hope I grow. I hope the damage can be overcome. I hope these lessons will get easier instead of harder.
I'm very tired and very humbly human. And fairly miserable. It's only natural I should be.
I'll sleep and get up tomorrow and try again. I don't see any other option.

Don't flog yourself, you are only human. We all do these things and live to regret them. We feel miserable over old sad things instead of looking ahead, of marvelling at the light and colours. This too will pass (hopefully).
Hugs.

And the other side of spectrum aint all that sweet either. Never giving out negative oppinions, evem the deserved ones. Alwas being pleasent and agreeable. Alvays being an underdog so that you dont step on any toes... Gives you a lovely ulcer that's what it does. It's all about the ballance betwen the opposties i guess.

We are all of this and more.

A good friend of mine used to to tell me, "Each new day is a chance to start over."

A new day, a new you, a new me. An opportunity to fix what isn't working, to make things better.

Wake up! It's waiting for you. For us all.

I've been on the giving and receiving end of what you've mentioned.
It's miserable on both sides.
These things make us who we are, and we deal with it.
I had my heart devastated by a dear friend a month back that exposed my faults in a fit of anger. It was good for me, not at the time, but later, it was very good for me.