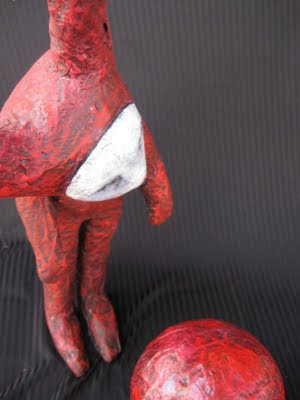 It's also the sort of devil who just ate a bunny.

This is the sort of devil with a fluffy bunny stuffed inside. Like a mummy. Oh but he's so cute. 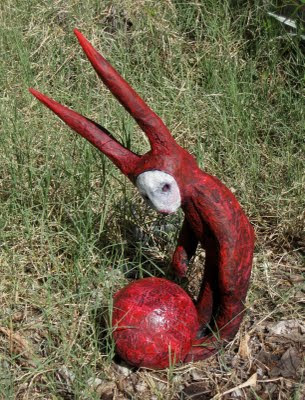 And really, all these are guesses, because we could be dealing with a very strange sort of rabbit instead.

But I don't think so.

Definitely a devil. Or at least a demon. As I worked the figure out, balancing and laying on layer after layer of thinner and thinner paper, I worked out why I haven't been working on the book.

Or rather, I worked out a way to get around the hang up. The hang-up, I'm fairly certain, is some kind of fear. But it manifests itself as an approach that didn't work. Over and over.

I've been doing it wrong.

The one thing that hasn't changed is the dots. The bits that will eventually be tied together to make a (hopefully) cohesive whole.

I need to put the whole from my mind and just work out the bits. Not by gathering a list of the bits (the dots), but by picking one at random and writing it. And then another. Eventually, they may connect themselves.

This seems to be working better.

It's so cool to be able to watch this develope. Can't wait to read it!!

Love the demon bunny. I notice when I draw I find the need to draw rabbity things too sometimes. I usually draw cats more. So mysterious and magical.