Driving home on Dinah Shore. I know the name beyond the golf tournament--she was still pretty hot stuff in black and white when I was but a toddling tot. Even later on I always got her mixed up with the other blond Hollywood hottie--Doris Day. Didn't help that they were both singers too. At best I conjure some sort of Malibu Barbie amalgom. I try harder, but I can't remember either of their faces. But I remember Frankie. 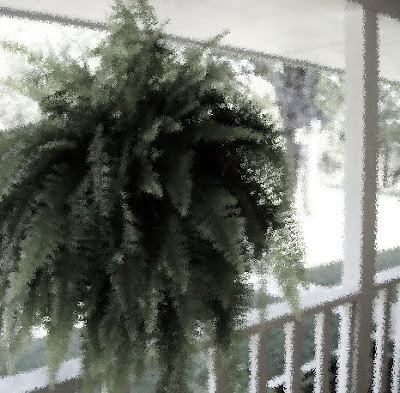 Frankie lived with a fiftyish blond woman named Julie, in a rambling bungalo across the street from our Big Blue House in Georgia. They were quite the couple, those two. Today I'd know them as hoarders, but not then. It was the eighties, and I'm not even sure psychiatrists used the term yet, but hoarders they were. Stuff hoarders, and animal horders. Dogs outside, cats inside and no shortage of either. They had a deep, friendly front porch with comfortable chairs to sit in, tables for snacks or cards and monsterous ferns with bird's nests tucked between the fronds.

Inside that front door, from foyer to stoop, boxes, bins and bags lined every surface from floor to 15 foot ceiling, save for a labrynth of narrow paths covered in all sorts of small rugs protecting the hardwood underneath.

The smell from the cats was unbearable, really bad enough to sting our eyes, so we'd visit on that confortable porch, or they'd come over to see my latest work. Julie was an avid reader, but Frankie had eye problems, so mostly listened to music, wore lots of plaid and complained adoringly about Julie and her cats. They had their groceries delivered and I only rarely saw their car--some antique brown thing, all secrets and soft curves. That car was a girl.

I adored Julie too. It wasn't hard. She was just like that. But what's got me tonight is Frankie. A conversation with Frankie. Frankie and me having lunch at Dukes, an icon of a diner in Augusta. Frankie leaning toward me over the table, taking my hand and telling she'd never really felt old until she met me. That her first crush had been on Doris Day and that her second, and last, was on me. She told me, as I sat stunned into silence, that I reminded her much of Doris. That my features were not finely sculpted, she told me. Ouch. But hat I had a glow that was irresistable to her--that had her name on it. She said that, in the two years since we met I'd put her through quite the gamut of self examination. Why Doris? Why Lisa?

"I don't know what to say," I told her. She explained that there was no need. We were friends. It was a crush. She loved Julie. Had loved Julie for over twenty years and would love Julie for the rest of her life. But I was going away for good, moving to California, and she thought I should know. Or at least, she wanted me to.

Julie and I exchanged a few letters in the months after I came to the desert. A couple of calls. The last time she called was to tell me that Frankie had died. Julie was going to live with a relative, a niece, I believe. After that, I didn't hear from her again. I could've tried harder. I could've realized she was important to me. I was working a lot. And I knew less then about how space folds and how little geography actually matters.
But today, I remember Frankie, her boots and her plaid shirts. How we once lost one of Julies infernal cats, replaced it with a look-alike that didn't fool Julie for a second, and how the missing cat turned up just hours later. And how we laughed.
But mostly, I remember Frankie and how she taught me that we never can know what another person is thinking, even someone we see every single day. And that mostly, the best we can do for anyone is to appreciate them for exactly who they are.

Thanks for sharing that, Lisa.
xxo

Welcome to my blog

I wish I could write the way that yu do. To be able to put my thoughts down like that. You have a gift.
Thanks for sharing

oh lisa, you crack me up, you write so vividly, what a gift, thanks for sharing frankie's story, and soosi peeing in the toilet, omg, your late night hunt for her was priceless !
they do own us, no question about that.
hope your ankle is feeling better, your natural flow returns. it will! you have such a great way of expressing yourself makes you a gift to all who know you