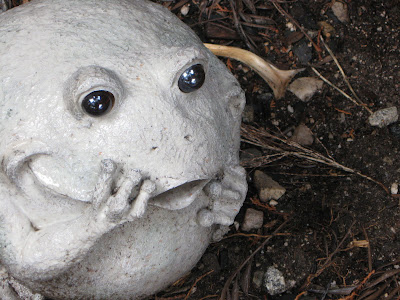 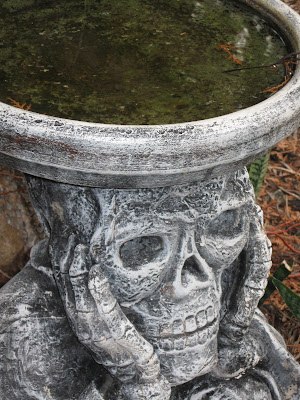 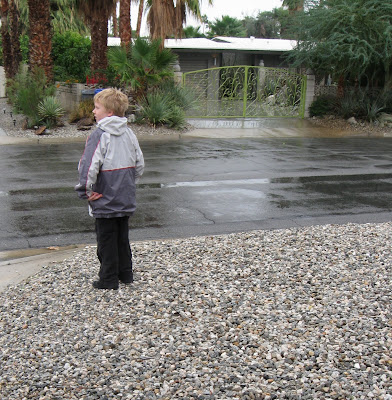 Finally we did the organizing we'd talked about and put off for months. It's the sort of rearranging of rooms involving moving bookshelves (and sorting their books), moving computers and game systems (and sorting their wires and cables) and rearranging the art on the walls. No shortage of yaks to shave there either.
A project not to be taken lightly. It's a commitment, not to be abandoned once begun and not to be finished in a day. It becomes very like a slider puzzle, or worse yet, a Rubik's Cube. With dust. With dust and a cat capering about for added chaos. Eventually, order begins to grow out of the stacks and jumbles and the finish can at least be imagined.
Given the wide range of types of problems to solve, I'll take this sort over most. Problems involving things are infinitely easier than problems with people.
It's rainy and cold, gray and gloomy outside. It's indeed possible for palm trees to look sad. Aubrey and Orion ventured outside and she took photos of wet and gloomy and of Orion, who is neither.
Tonight, Orion and I finish Chapter IV, leaving our band of dwarves, hobbit and wizard in the clutches of goblins once again, this time in the dark underground. I encourage him to ask questions, especially about words he doesn't know. Tonight he learns what a feed bag is and, interestingly, that questions tend to get answered as we read along. Often the answer to what worries us is just around the edge of the next sentence. So we might do well to worry less and keep moving along.
Hmm.
Posted by lisa at 10:35 AM

Why is it that the obvious and the easiest is also the hardest? The simple act of staying in motion is often the one that stymies us the most. I know that every time I pause to consider where I place my feet, the path seems to come alive with fearful things--things I don't pay attention to when I'm moving along.

well-spoken, Melissa P. I don't know the answer. Possibly it's because when we stop moving, we stop trusting our instincts.

WV is egedynde, which may be how our hero approached unknown territory in Flatland.

Doing the same thing today. Dechristmasing my room, finding places for new things and throwing out old things. I usually do a major cleaning of my room every season and I call it spring cleaning whether or not it actually is spring, lol.
It is always a multi-day operation even though it shouldn't be. Lazy human habits I suppose...

Yeah, going from one ordered state to another, dissimilar, ordered state usually requires passing through a very chaotic state... doesn't matter if it's rooms, relationships, or reality perceptions...

We finished reading The Lord of the Rings, after doing The Hobbit, to Alia earlier in the year. We watched the movies after each book. We're doing Patricia McKillip's Riddlemaster trilogy now.

A few weeks ago, Steven Archer of Ego Likeness did some "collaborative work" where he collected phrases from folks to base paintings on. Since #Hellseason was barely past me, i thought of a quote by Winston Churchill,"If you're going through hell, keep going."

That's how i get through #Hellseason, and the painting will be adorning my office somewhere, hehe.

If you're going through hell...