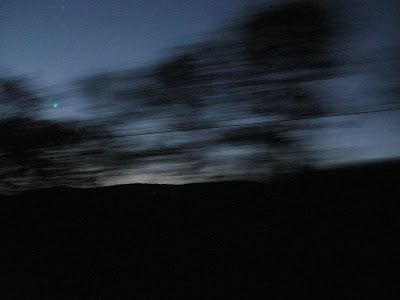 It's 4:30 in the afternoon. I'm lying on the sofa with an old Galaxy Magazine (December 1967.) I'm reading Poul Anderson's "Outpost of Empire," but starting to doze. Orion builds an XBox avatar for himself, with cat and light sabre. The music reminds me of "Finding Nemo" and I'm yanked backwards to the winter we moved into this house. The past can do that at any time, without warning. It's the past and none of us can escape it.
Orion in diapers still, cold air outside, and Nemo over and over because the cable isn't live yet and because Nemo makes him giggle and grin and clap his hands together.
There I am, filled with the anticipation that comes with both a move and a baby, I can hear Alison and Aubrey excitedly claiming their own rooms. There I am, not knowing some of the things I wish I didn't know now. It's not a good day for looking back.
Mercifully, the music changes.

Not a good day for going forward either. As ready as I believe I am to get back to work, my brain isn't ready. It's the day after Christmas and no matter how rationally I may approach the holiday, it still takes a toll of energy and resources and now, like millions of fellow humans, I'm feeling the punch. Trying to work now would become a dance of what I want to do and what I must do. It's a stupid dance of indecision with way too much spinning.
It's not a good day for thinking either, because thinking on the day after a holiday turns to worry, or worse. It's human nature. I didn't make it up, do some research if you like.

Still, I couldn't get the tree out of here fast enough. It's just the way I fly.

Now the sun's gone and we have hours of dark before bedtime. It's not a good day for writing either. But I said I would, and it seems to me that on the day after Christmas, an effort is good enough. Anything else I want to do will still be there tomorrow. I'm going back to the sofa, with snacks and a blanket for Orion and me.

Robert Silverberg and Larry Niven will see me through and tomorrow will be exactly what it's promised to be, another day.

I feel the same way after Christmas. I have to plan it out that I have no immediate projects to do otherwise i will be spinning around deciding weather to work or rest. I make rest the only choice now, a luxury I hope I have for awhile yet.

I got a light box and scanner for Christmas, this means hand drawn old fashion way poppet animations in the future, with practice. :)

Hope you had a good holiday!

I'm reading Apollo's Angels, a history of ballet - it's making my head full - in a good way, but not good for housekeeping . . .