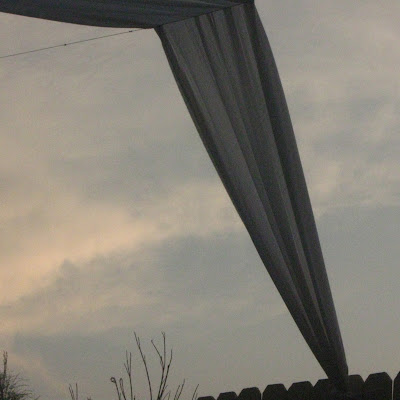 I've awakened too early, from the middle of a dream where the skies were richest blue with Magritte clouds and the landscape was flat roads and golden grass moving in the wind. I was in a house, spacious and airy, with broad fireplaces and tall, marble fountains. I lived there, but it was not my own. I was trying to figure something out. The something involved squares and I was trying to figure it out quickly, because something terrible was coming. I was afraid.
It seems that often our dreams are for working things out-- addressing concerns that exist in our waking lives. Everyone has worries, even children. In dreams, problems and fears can become puzzles and monsters. In those places, they carry as much weight as anything in 'real' life. When we wake, the distance is great and traveled fast. The dream memory is too fragile for translation and often lost, leaving only feelings. Or sometimes there's a residue of intricate details but no story.
It's the cat, or other normal house noise that's yanked me back here. I've returned reluctantly. Even as the pieces fall away, a scream of protest echoes in my ears. My own voice? I can't be sure, but I'm sure I'm not ready for...what?
The day. Skies cloudy. Rain, rainy.
General Specific. Sheep in the Big City. Excellent cartoon.
Also a term Aubrey and I adopted for an idea. The idea being that fairly often, specific complaints are symptoms of a single, general one. For example, a litany of gripes--- all the little things going wrong in a day ---versus a general gripe like hunger, a tortuously uncomfortable bra or lack of sleep. The specifics are often symptoms of a general. Fix the general problem and the other things settle out.
True enough, today I have unfinished business--the unresolved remnants of my dream and lost sleep. True enough, today I have problems---yesterday's restraining order violations are today's unpleasant emails. Tomorrow I'll have problems too. And the next day--- a lost shipment, worry over my son's cold, a sticking drawer, a stack of paperwork, an idea haunting me to no end. It's...always...something.
There's no fixing the General until I sleep again. But I've named it, so the specifics' teeth are not so sharp. I've labeled the little critters now, sorted them and put them into their places. When I do sleep, I wonder if I'll return to those golden grasses. I wonder what it would feel like to walk down those dusty roads in a long cotton skirt and bells around my ankle. I wonder whether the air is warm or crisp and cool. I don't know if I can return or even if I should. Something dark is there and it's waiting for me. But it's probably waiting in other places too. The best I can do is trust myself because in this world, this place, other people are counting on me and I'll need sleep.
Posted by lisa at 8:04 PM

There is a book hiding in this post; my mind found a complete world and a story in it, with an arc and a meaning of its own. Thanks, I needed something like this today -beautifully compact, reasoned and complete.