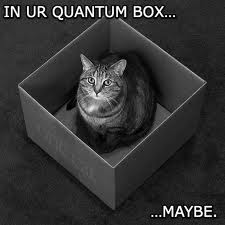 stolen with appreciation for whomever created this LOL.

The cat follows me. The idea of the cat. That cat. Schrodinger's cat. The equation eludes me. By just... that... much. Dammit! Almost had it that time. Together, they haunt me.


I'm driving in the rain, at night. Somehow, somewhere via some association I can't remember, Schrodinger's damned cat got connected to driving in the rain, at night. This desert doesn't receive rain well. Possibly it knows it was once under the sea. Possibly it wants to be there again. We're all sand underneath, nothing to absorb moisture, so when it pours, it floods. Ramon Road runs long and I'm on it, in Thousand Palms, trying to get back home. Already I've altered my route several times to accommodate closed streets and now I find myself in enough water to be losing traction, four-wheel-drive or not. I proceed carefully. The water is brown with sand and other debris, and moving pretty fast.

And still that damned cat haunts me. It picks and claws at reality. Perception. Finally I get through this area to a traffic light. It's dark out here. Not so many street lights. Maybe some are out. That's the thing about this particular cat. It forces us to think about perception. This day, so dark and gloomy it was never really day. And the moon tonight, so bright the clouds stand out darkly beautiful against the ink of the sky beyond. It's not a real night. It's damned claustrophobic.

I'm waiting at that light forever. Thanks, Albert. Earlier, Iwalked downtown, remembering harsh words exchanged with Spencer. We had a stupid argument about...artistic differences. Funny, how arguments are like funnels, vortexes, black holes that pull in all sorts of unrelated things, personal insecurities waiting silently at the dark edges. Silly fucking humans, picking at lint while our houses burn.


Did I forget my wallet? There was some confusion before I got into the car. I took it out to get cash. Laid it on the counter to answer Orion's call...did I put it back? I glance at my purse on the seat. The wallet. I think hard, both hands on the wheel. I'm not reaching for the purse, I'm in too damned much water. Is it there or not?
I have no way of knowing for sure. Without recollection, there is only probability. Therefore, the wallet is both there and not there until I look.

Of course it is. And isn't.


It just doesn't matter. Finally, the light changes. I want to get back to my own cat, make things right with Spencer and sit on the sofa in my pajamas with hot chocolate. I'm not good at holidays, don't care for flooding. I miss the studio. In there, things make sense. I think I'll install a chalk board. 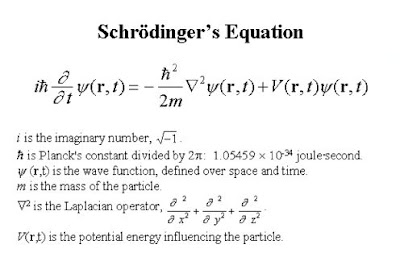 You must make an edition of Schrodinger's poppet. I saw the first few lines of your post and several possible ways to do it popped into my head with no one, not even the artist, knowing which box contained live poppet and which contained dead poppet. I want one. I need one. I want to know how many people can resist opening the box.

Maybe I need to make Schrodinger's unpoppet. Wish I didn't have to work today!

Lisa you're always an inspiration.

Thanks Robert. I actually did make Schrodinger's poppet once. It was a mirror box, a bit smaller than yours, with a live poppet on one side and a dead one on the other.
I no doubt will go there again, as this cat just doesn't leave me alone.

Looking forward to seeing what you come up with. Pretty sure I know my next project. I'm gonna send you something ... Eventually