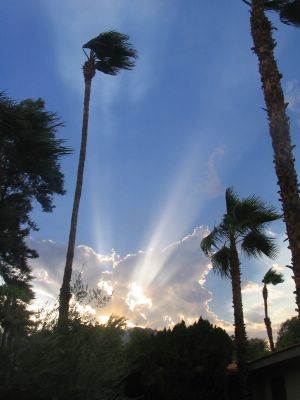 Busy day, getting orders out to people who've been extremely patient.

Then there was the earthquake. But it was only a little one.

Then there was the big wind storm and the emergency striking of wild canopies, which means we'll spend part of tomorrow putting them back again.

I've said so before---humans weren't meant to live in this desert.


Our friend Trent had some fun with poppets. Here's a link to some video work he did to one of his band's songs:Trent's Poppet Video, with Whores of Tijuana.


Craig Steffen sent this link for Orion. I was delighted, Orion too, for at least a minute.
Being four years old is fun stuff.
http://www.nasa.gov/mission_pages/exploration/mmb/orion_announcement.html

Gurtie has, without warning, officially declared war on the sofa in the den. Whatever brought that on probably happend while the rest of us slept. Possibly poppets were involved.

Now back to work on the fun stuff I only get to work on at night, when my feet are too tired for studio but my brain is still working. Mostly.

I like the video - especially the way the panning shots over the poppets' heads were (to me, anyway) reminiscent of the crowd at a rock concert. Also liked the way they appeared to "march" at times.

I banged my nose on the edge of the tread of a metal stepladder yesterday! And now it looks just like Orion's...

The stepladder, however, does not have a black eye.

Re: Gurtie and the couch

I've spent much time over the years observing cats. I've had a few extend friendship, and one kitten (in the early morning hours) who actually spoke to me - I assume this was because she was young and hadn't yet learned to be selective.

And what I've learned is this -

Cats see things we don't. They experience the world differently from us and, much like Neil's Black Cat in "The Price", they sometimes take it upon themselves to protect us from things we don't even know about.

If Gurtie's taken it upon herself to go after the couch, you can be sure there's a pretty good reason for it. It might be simple - someone spilled something yummy on it, or it might be more sinister. But before you punish her or toss her out the door, I would recommend you do a bit of observation first.

You never know. You live with a cat.