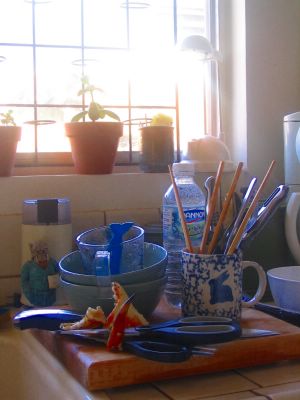 Ben is working on a sculpture that requires crab claws. They will be molded and cast in resin, of course, but in the meantime, he has the task of finding at least one each that is 'perfect' for the part he needs.
We decided, being the dedicated artists we are, that this will require eating crab once a week or so.
I made a salad with baby greens and bell peppers in bright yellow, red and orange, grape tomatoes and carrots in a balsamic vinegar dressing. Perfecto.
Ben made Poke. (Po - kee) which he says is a popular dish in Hawaii of crab, scallions, and raw tuna with sweet/spicy seasonings and tons of sesame seeds.
Though it was delicious, I couldn't eat the raw tuna. It's a mental thing. Ben allowed that, yes, this is a fairly advanced level of raw fish eating.
Of course, being me, I wanted to explore why I couldn't eat the raw tuna. Was it some personal psychology? Was it associated with my time in the morgue? Was it some anthropological hard-wiring? Was it that I just don't trust Ben, who is known for offering exotically 'difficult' foods to persons just to see if they have the nerve?
I recalled the large bowl of raw chick peas he once kept on his coffee table. He'd munch from them occasionally, looking greatly satisfied, waiting, like a sessile sea creature, for his guests to do the same. To his evil amusement, of course they struggled to maintain composure when what looked to be a sort or peanut-y experience became a horror of sawdust-tasting paste that just wouldn't go away.
So, I mused aloud the question. What was it that kept me from eating the raw, red, slightly transparent cubes of tuna? Before I could expound my theories, he offered that it was simply because I am a princess pussy pants without an ounce of epicurean courage.
I have an ounce. I do have plans for a non-Ben sushi experience.

The king crab legs were delicious though I fear I've created a Gurtie monster. Something in the look on her face as she crouched dog-like, awaiting the next nibble dropped her way made me think of nightmares I had once.

Indeed, it was a idyllic looking tableau, eating delicacies under the canopy by the pool in gentle seventy-degree breezes. From a distance, we seemed to be basking in paradise. like gods.

Ben is three claws the richer for his creation.
Posted by lisa at 8:51 AM

Okay, that was well worth the wait!

Oh and, any horse that can't walk through a puddle in the ring is automatically called a princess **snicker**

Are you taking volunteers for the crab eating??? Sign me up!!!

If it came to a choice between being a princess pussy pants and putting the uncooked meat of any species in my mouth...

Let's jut say I'd rule with an iron fist from my pink pussy panties.

Even if Neil Gaiman himself showed up at my house and invited me out to his favorite sushi joint, and offered to write a special book all for me, about me, starring me... I'd still pull on my pink pussy panties and parade them with pride.

hahahahahaha you are KILLING me!!!!

no i'm not a sushi fan either!

I take it the raw chickpeas were dried chickpeas that hadn't been soaked...?

That they were dried and not soaked would explain a lot, because they were like nuts with all the oil removed, which is to say, they were nothing like nuts.

Hopefully, sushi will be to raw strips of tuna as nuts are to dried chickpeas, making it edible and not likely to give me nightmares.

I LOVE dried chickpeas that taste a bit like dust. I eat them everyday, together with pumpkin seeds.

Roasted pumpkin seeds fresh from the pumpkin are one of the most divine and delicious foods that humankind was ever inspired to create.

Usually only have them around Halloween, during Jack-o'-lantern season... but I've been temtped to buy pumpkins just for the seeds, though it seems wasteful.

I also wonder if raw tuna isn't a major component of sushi? Or at least one kind of sushi?

I would actually like someone to explain the whole sushi phenomena to me. What is delicious about it? Honestly. I ask this without judgement or sarcasm. (Unusual for me, the judgemental sarcastic jerk.)

I like sushi, but I usually go for the all veggie. Sometimes I'll get a roll with salmon. The last time I went to a sushi restaurant a friend ordered an octopus roll. We didn't quite know what to expect and when it arrive it was a sushi roll with 4 tiny tentacles sticking out the top like they were waving. I could NOT believe it when he ate it! Blech!