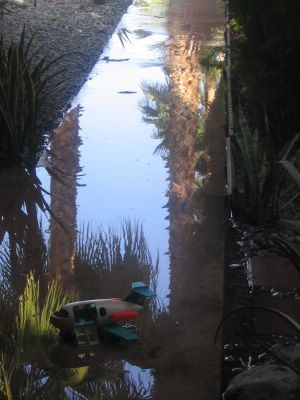 The day began with the discovery of our flooded front yard. Apparently the fake rain system we had installed went a bit nutty and well...too much of a good thing is just too much.

It's possibly time to post a new DON'T PANIC sign on the wall. Because panic would be the gut reaction to the Looming List of Doom, but not the reaction that will get things checked off it.

I'm having a lovely email exchange with Gene Wolfe. We are discussing weirdness. I told him about the weirdest thing I'd encountered in the morgue. Overall, it appears at this point I have it covered with multiple morgue goings-on, but I haven't quite topped his encounter with a guy walking along, kicking a human head down the road. I'm not really thinking of trying.

If you missed yesterday's Daily Show (yes, about the 'hunting' accident) I highly recommend it. It's.....just adorable.

It's after ten and I'm considering having some coffee and working a bit more. I took time this afternoon to help Orion fly a kite. What a look on his face when the thing took off!

Maybe instead of the DON'T PANIC sign I should instead put up IT WAS WORTH IT.

Do I hear splashing? Sigh. Note to self: Call the gardener.

Time off is always a luxury you can afford, even if it doesn't seem that way. Especially if some of that time is spent with your kids.

Its funny how much time we spend working so we can afford to have the life we want, but never seem to have the time to enjoy.

Because of all the working.

Just thought I'd let everybody here know that my Daughter's Peewee cheering squad did great (though I'm not in any way a cheerleading fan) at their exhibitoon the other night, and my daughter even helped a buddy out by pulling her skirt up in the middle of the routine when her buddy's undies were showing.

My daughter is so much cooler than I am, and she's only 5.

One thing I always encourage people to do is not feel guilty about time off. I agree with RRNN, it is a luxury that we must afford ourselves and do so with a clear conscience. Things pile up whether we are there to watch them pile up or not so we might as well take a well earned break once in awhile to LIVE.

And the plane in the water is ust a fantastic picture.

My huzzbin likes the daily show so I did see the hunting issue.

I wanna get myself one of them thar humscalades! With -0.5 miles to the gallon, who could go wrong??