Poppets in Fake Pants, Alison and Logan, My Favorite Novel, again and Poppets on Neil Gaiman 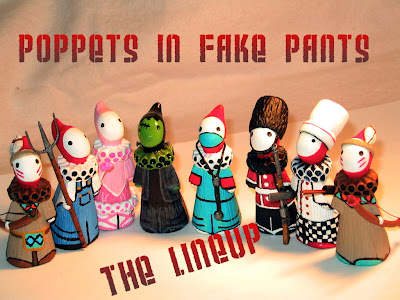 POPPETS in FAKE PANTS have arrived for Halloween.

Here's the first line up. More will join us in the next couple of days.


Poppets in Fake Pants are a collaboration of joyful abandon with Alison Tawney and Ben Warren.
I love rubbing brains with these two!


Alison, who is also my daughter, hopes to have her own for-real-bricks-and-mortar-Poppet-emporium one day. I can imagine it. Then again, I can imagine a lot when it comes to Alison. She is, well, of the magical sort.

I also must especially thank both Nora Wright (AKA Ravyn) and Mimi Ko (AKA MimiKo.) I'm not sure anymore which contributed exactly what, but I do recall many ridiculously fun conversations about Poppets in fake pants, and that both of them had great ideas. Thank you!


Poppets in Fake Pants. The more fake, the better. All bets are off here---these are for fun. 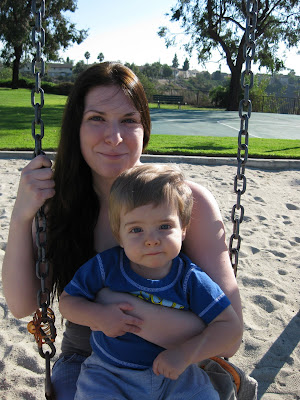 Here is Alison, with Logan, who just turned One and who inspires her every day. 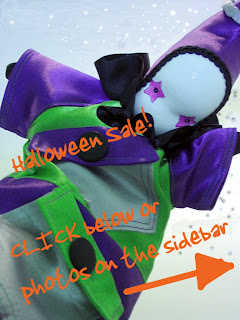 And, recently, in other parts of the world: 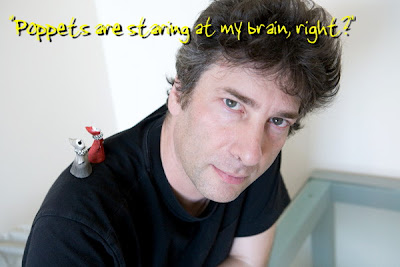 POPPETS AND OTHER STUFF! 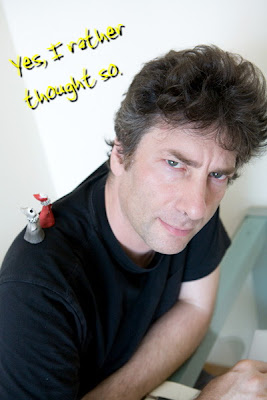 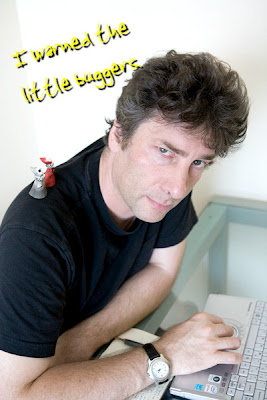 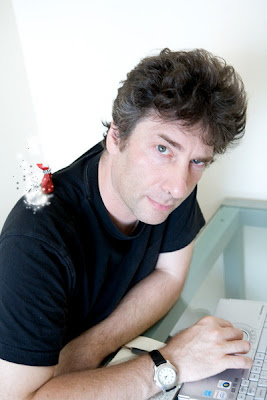 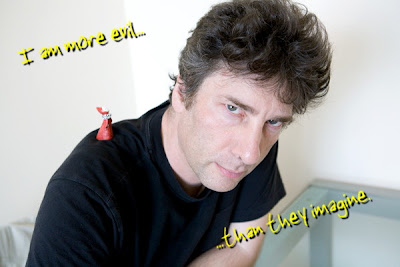 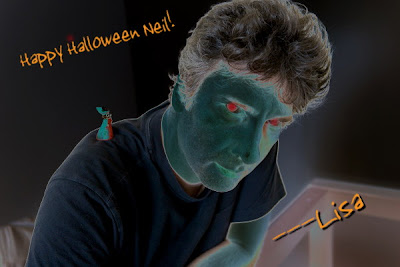 Photos of Neil and Poppets by Mimi Ko.

(no poppets were actually harmed.)
And lastly, we've sort of started this conversation in comments for the previous post. My question to you---What novel (or story) have you read and re-read at different points in your life and how do you think these perspectives affect the whole experience/meaning of the work?

Or, if you do revisit a favorite novel or story, why?

Hope you're enjoying your October.

I have a number of books that I re-read in an approximate two year cycle: all of the original Dune books, Max Barry's _Syrup_, Feist and Wurtz's _Daughter of the Empire_ trilogy, Zelazny's _Lord of Light_, _Lucky Wander Boy_, Frank Herbert's _The God Makers_, ...

Sometimes I want something relaxing and familiar that I know I'll enjoy.

In my life, when I was younger, there was a "Lord of the Rings" thing every year. Now I work with books, so I read pretty much new stuff but I can tell you this: Gene Wolfe's "Book of the New Sun" is a re-read I am looking forward to, & I really hope my re-read of "House of Leaves" ages well, but I am worried it won't.

I love the witch in fake pants!!!

hmmm... rereads... I enjoy rereading the Dragonlance books but they are fun-fantasy-fluff reading so they might not actually count here as actual 'rereads'... like Mordicai I used to reread LoTR regularly, but frankly I think then when I need a reread these days I go back to Sandman, Lucifer, Fables, and Watchmen... reread the whole stack and then I am good for a while.

I should have called it a 'franken-witch' and I also love the Kossak.

Alison and Logan look lovely together.

I re-read Zelazny's entire Amber series every few years it seems, The Secret Garden because it always reminds me of falling in love with a world not my own, Anne McCaffrey's Pern books and also Herbert's The God Makers (YAY DAN!). The most re-read book of all though for me is East of Eden by Steinbeck. It's my favorite book of all time and no matter how many times I've read it, it still works beautifully.

Yay Miss Bliss! I am always surprised to hear that someone else has read The God Makers. I love it to death; it's like a quick warm-up for Dune.

As my daughter gets older, I've taken the opportunity to re-read a lot of my childhood favorites, in order to pass on the best of the bunch to her. Some of those I've read a half-dozen times or more.

For myself, there's lots of books that I re-read periodically:

Mystery: Most of the Dashiell Hammett and Raymond Chandler books, along with early Ellery Queen. For current writers, Joe R. Lansdale is good for multiple readings. I wait long enough that I forget plot elements, but usually I re-read these for the exquisite dialogue and sense of place.

A similar question could be asked about favorite "old-friends" movies - not necessarily your best movies, but the ones that you watch multiple times as a comfort.

My friend is a huge Dune fan so I fianlly found the 1st book to read. Kudos to use Dan for rereading that multiple times because I don't think I'll ever read it again :p LOL

I reread mostly kids books espeically at night when I need to sleep. I can read one chapter of Matilda by Rohld Dahl or Goblins in the Castle by Bruce Coville and fall asleep to dream about everything else or just be up for 2 hrs reading the whole thing.

I've also reread Moby Dick at least once but skipping all the dang whales :p I've read and reread the Harry Potter Books when they came out for movies just so I could whine. I've reread The Eagle has Landed by Jack Higgins and bought his Borhman Testament to reread again.

hmm I had a thought of a few other books that I've reread but I just can't think of what it was.

Oh and since I came here from Neil's Journal I've read and reread American Gods and listened to it on tape. Read and listened to Anasi Boys. Reread Neverwhere, Stardust and Coraline.

I know my husband rereads The Relic every year or used to.

What books can you never get through again? I know at some point I stopped reading The Secret Garden and A Wrinkle in Time. I just couldn't get through them.

Not too many titles that I re-read, but a few classics:

I just read "Dracula" for the first time, and that will be a definite re-read.

O. Henry's "The Ransom of Red Chief" is another. That one makes me laugh even without reading it.

I know there are others, reading gets me off the computer.

Thanks for the prompt!

When the world is awful I read Heinlein's Glory Road,to remind me of fun and rompish things and Alice through the Looking Glass, because I always remember the pieces I forget at strange times.

When I got married my bridesmaids carried books that were important to me and my husband. We covered them in velvet with feathered book corsages instead of flowers. Three bridesmaids, three books Glory Road was mine, Alice's Adventures in Wonderland was ours and "The War that Never Was" was his.

We love our books.

My sister and my best friend kept the books though so we had to replace them. My daughter carried "The War that Never Was" so Joe got his book back. It amuses me to think of my sister reading Glory Road though - not the SF type.

When I'm missing home (Hawaii) I read Carol Severance's 'Reefsong'. I love how she incorporates Polynesian sensibilities with inhabiting new worlds. I also tend to read Guy Gavriel Kay's Finovar Tapestry at least once a year. My new favorite is Patricia Brigg's werewolf series - they are so much fun! And Neil Gaiman...everything is wonderful but I tend to reread Coraline the most recently.

Oh man, Frankenstein, good call. I so so so heart the monster.

Some books that I enjoy so much that I still go back for more are: Night Life of the Gods by Thorne Smith, I just gave a copy of this to Lisa as a matter of fact. It is so ridiculous and funny. Hope you like it! And, Operation CHAOS by Paul Anderson. Alternate Earth story that starts in WW II and carries on through the seventies in a world where technology is based on magic instead of science. One thing I really like about this book is that the people use magic like we would if we had it. G.E. is General Enchantment, planes fly with banks of brooms instead of engines, Werewolves, witches, zombies and Vampires in the U.S. Army. I enjoy this book every time I read it. Also I gotta say that I can re-read anything by Larry Niven set in the Known Universe at any time. My hands down favorite Sci-Fi author.
Bent.

Thorne Smith! I powered through all of his books about ten years ago. My favorites were 'Night Life of the Gods' and 'Turnabout'. 'Topper' gets all the attention, because of the Cary Grant movie. I'm probably due for a re-read on some of them... thanks for the reminder!

The English books most re-read in my shelves are "Pride and Prejudice" and "Good Omens". I mostly read them because they make me smile (or laugh even) and that is good to have something that reliable at hands.

Apart for these two, I often read again a book because something in another book made me think of that first book, so do not particularly notice an evolution of my feelings towards the story Unless the rereading is done on books I studied at school - which can really ruin a good read for you - for instance having reread all of Zola's work, I wondered why it was that I liked it so much as a kid and hated Balzac, whereas in my adult eyes Balzac is the far better writer. But it was just how they were presented in the class room, I think

It's funny "Good Omens" is one that I end up rereading about every three years or so - it was given to me because my then three year old son reminded someone strongly of the anti-christ - the Adam one. Well over the years at least once a year someone suggests that to me or his sister. So every two or three years I reread it because A - it's funny and B- to see what about my Alex has so many people thinking about Adam so consistently.

Alex has not been encouraged to read that particular book.

It was however my primary exposure to Neil Gaiman for quite some time. I just started reading Sandman after meeting the poppets.

The Secret Garden because it always reminds me of falling in love with a world not my own, Anne McCaffrey's Pern books and also Herbert's The God Makers (YAY DAN!).