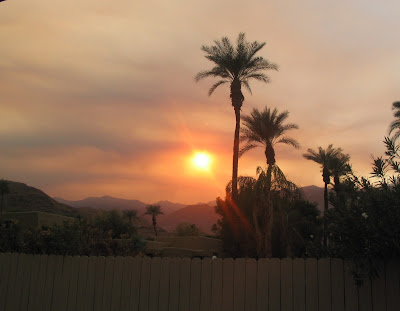 Already this morning the fires were on our minds. We begin our days with the news, hoping for improvement, sad for the damage already done. By midday we could see the smoke moving over the mountains and by four thirty, when I took this shot from our back yard, it brought us the somber reality of loss.
The LA County Public Health site used a photo I posted here last year, of other fires.
You can see an update of the fires and containment status on Google Earth. 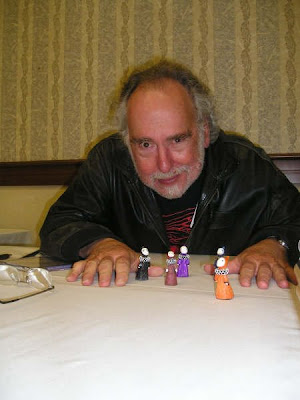 Peter Beagle, it appears, got his dose of Vitamin Evil during Vcon last week.

Thanks to Rubius for this photo.

Strange Roads will be available in January. I've read the three stories. You won't believe where Peter has taken Poppets.

Or possibly, where Poppets took Peter.

Either way, wow. I'm both honored and delighted he went there. I look forward to sending you down those very strange roads indeed.

On the home front:

But then, I know he does.
And, finally,
The Poppetzez haz lef the buildin'.
Whew! If you're expecting some, they're on the way.
G'night
Posted by lisa at 5:11 PM

I am glad to hear you haven't made it out of the frying pan yet.

I think tis a lovely smile and I am very excited at the idea of the new book!!!

The baby is cute and congrats on packing off the poppets.

What a cute bouncing baby!!! I know because I bounce him around quite a bit... but I've learned to wait awhile after he eats; the outcome is usually not so pretty...

All the fires..it is so horrible. Even moreso when reports come in that at least some of them may have been, or were, arson. Despite working in mental health I still often wonder "what is wrong with people"!

That is one cute, cute, CUTE baby. I can feel you beaming from here!

Great picture of PB and the Poppets. Glad to know that they are on adventures together.

That is a great picture of Mr. Beagle!