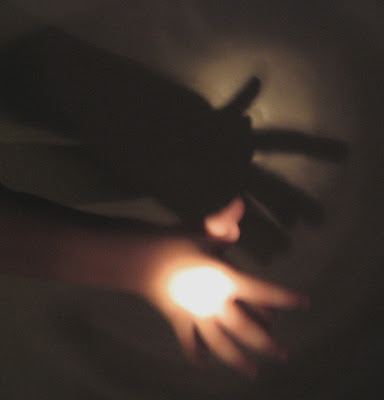 Orion was assigned a presentation about shadows.
So, we played in the dark, talked about light and how photographs are made.
He left for school with a photograph and new information pinging around in his head.

Soon enough he'll put it aside, then later on, he'll connect it to other information, constructing, piece by piece, his map of how things are.

*****
Today I received new stories from Peter Beagle, written around art images I sent him. I was both surprised and delighted at how he interpreted the art and where he went.
Strange Roads indeed.


*****
I'm reading bits of Neil Gaiman's The Graveyard Book, looking forward to more bits. Later I may envy you, wishing I could read it again, for the first time.
***
Orion and I won the Gran Prix of Mario Kart today. He in first place and I in second.
We rode in the parade. We danced...for real.

The Freedom From Religion Foundation has erected its first billboard in Madison, Wisconsin. If you live comfortably near Madison and have a Poppet and send me a Poppets On Tour photo of your Poppet with the billboard I will happily send you another poppet of the color of your choice.
No kidding!
*****
And a few days ago Derek Ash sent me two new Halloween poems. They are cool and sort of...poppety.

***
Today was the first day of a shipping marathon. Poppets are headed out in many directions to all sorts of new adventures.

**
Lots of creativity these days. Lots of making. Shadows and Light.
Posted by lisa at 8:28 PM

Thanks for the FFRF billboard info! The hubby and I have been thinking of relocating to Madison in a few months and that seems another little sign (or rather a giant billboard)saying "Yes, this is the right direction." Poppets on parade!

I'd love to get you a pic of the billboard... but I am afraid it is out of my range... freedom from religion, It sounds like a project that I could really get behind.

GREAT GODs of Literature, new books from Peter and Neil in one post (happy happy day)!!! Wish I had a private feed from your eyes while you read... but it is okay, I'm not too jealous... I get to see Peter on Friday when he comes to VCON and I even get to do a mini-intro for him at Opening Ceremonies (eek, be still my beating heart)... though I suspect I will ALWAYS be full of envy towards those lucky few who are entrusted with glorious prepublication tidbits from Neil.

Have fun during the shipping marathon. It must be nice to finalize the packages.

There is no shadow without light but who would really value light if we didn't know shadow.

I should add my envy is fairly mild because I will always be able to remember and treasure the thrill of merely handling Neil's Fragile Things script while helping him pack up after Balticon last year. ooh that thrill,... I still get it whenever I see my copy of the finished book. (I remember thinking, whatever you do...don't drool, don't drool!!!... just like when I got to help you unpack your art for the artshow... Teal Sauce.. White Queen.. too pretty, don't drool, don't drool)

Couldn't have happened to a nicer person, rubius!