Poppet Soup, Onithoptors and Love. In the Dark. 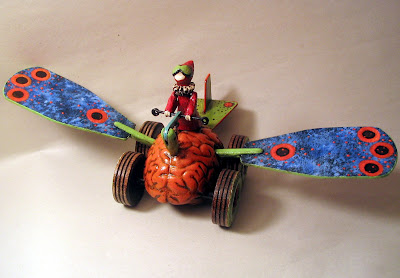 Poppet 1 Flyer
We had dinner at Supreme Dragon. We talked about many things, Pete, Bent and me, but eventually, we got around to talking about thestateofthings, as we seem to do.
The stateofthings seems as dark as always, a bit darker in places.
I can't stop noticing the several ridiculously huge fish swimming in the gigantic aquarium a few feet away. 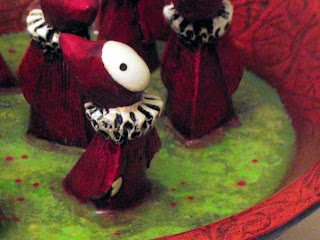 It's a tall
aquarium and the fish appear to congregate at the pane nearest our table, turning in near unison to stare our way. I think of how little kids assign sentience to all creatures. I think of fish staring down from a tank in the center of the room at humans who sit at tables, eating fish and discussing thestateofthings.
When I still believed ladybugs mulled things over, I listened to my parents and their friends at dinners, talking about thestateofthings. I couldn't understand what they said, just that they were worried and if they were worried, thestateofthings must be pretty dark. The world was different outside of my back yard. And sometimes darkness was very near indeed.
So I played.
Now it's my turn to worry, think and do what I can about thestateofthings. I know ladybugs don't have brains.
But I still play, mostly in the dark. 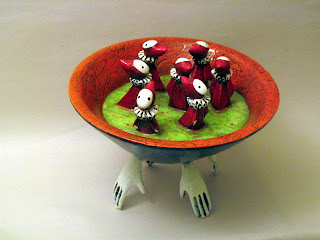 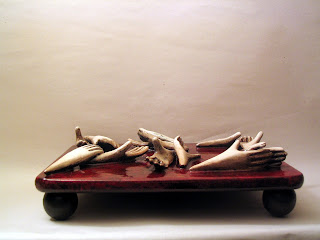 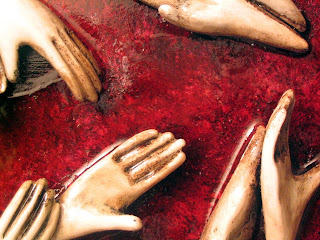 I was going to email you, but since you posted the picture here as well I can say it here: Kama II is great! Love the color, the look, the feelings it evokes. Very cool addition to the Play in the Dark sale.

I agree, Kama II is gorgeous and sensual.

My gawd, I love your soup bowls. That's fabulous. Teal Soup may still be my favourite, just because, or maybe White Queen on Her Square..., but sigh, this is great... the hands are delightful and the glowing is perfect.

The Ornithopter is cool. Just, think of what that poppet could see from up there.

Why, oh why do you do this to me Lisa? Tossing three yummy pieces onto the end of the sale like half-forgotten afterthoughts is just plain cruel...now that I've spent all my money. Sigh.

I especially love the ornithopter (as does my son). With its "old-timey" look, I like the idea that poppets have been around, observing, for many years. I'm going to start looking more carefully at flea markets and antique malls. One never knows where a poppet might be hiding......

The ornithopter is adorable and makes me worry that my poppets fly around at night. Kama II is strangely peaceful and relaxing to look at.

But Poppet Soup is freaking me out. Its adorable and I love the idea and its perfectly creepy. But all I can imagine is what eats poppet soup. And I think it lives in my basement and that it may be what leaves half eaten camel crickets lying in plain sight as a warning. shudder.

Thanks Carl. Hands are interesting creatures, on many levels. Easy to personify as here, where they represent couples. Some couples are made of a left and right hand, some are two lefts and some are two rights.

Rubius: I like the bowls too. Just like hands, things that represent eating seem to integrate themselves easily into 'poppet language'. You'll be seeing more.

Jordan's mom: Sorry!! We got overwhelmed and yes, a little carried away by October's arrival. Some pieces didn't get finished as early as we'd hoped. I'm still working on a couple of collaborations. But then, Halloween should last as long as possible.

cyllan: Thanks! You made my morning. I made three pieces. One you find adorable, one you find peaceful and the other freaks you out.
I think I'm doing this right.

Kama II is just amazing, Lisa. I must have just stared at it for 10 minutes when I first saw it. Beautiful!

I've always loved the poppets in soup since I first discovered your art. They're incredible pieces and I love the balance in this one with the little hands.