Play in the Dark or just play. 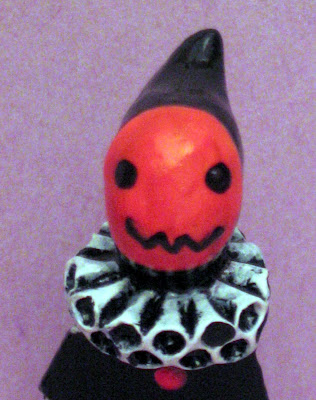 This is JACKO.
If you haven't looked recently, I've added some new pieces to Play in the Dark. More will go up tomorrow, including some MASKS, so your poppets can dress up for Trick or Treat.
More would've gone up today, but playing needed to be done.
Sometimes Orion and I play in the dark. We tried swimming in the dark once, wearing glow bracelets. The bracelets looked cool, but it was just too creepy swimming in totally black water. We imagined many things and after about ten minutes, got out sort of hastily. Some of the things we imagined followed us right to the door even though we hadn't given them names. Inside, in the bright light of the kitchen,we sighed our relief. We heard them shuffle away, disappointed.
We haven't tried swimming in the dark again.
But tonight, inside, we played a game we invented, sort of accidently. It requires only those crazy eyeglasses with attached nose. We take turns while the other is out of the room and put the glasses on things. The only rule is that they go on something for which wearing glasses would be ridiculous. The only goal is giggles.
It's a good game.
Play.
g'night
Posted by lisa at 10:14 PM