I was looking at the Rat I made for Ravyn. It doesn't actually represent any type of person, as neither does Ravyn, but I do see something in there in the attitude. When I looked at her without thinking of Ravyn, I was struck with an inexplicable unease. Then I realized where it came from. She has the attitude of an art show director. I knew I'd seen that look. Artist's know it. We experience it early on , before learning how not to accidently encroach on a convention director's control space, that invisible bubble of death. The look can also be earned by asking a question that's posted (even in Klingon) anywhere near the art desk.
Hmm. She's smart, and on the outside at least, a little scary.

I'm thinking of adding her to the RatBag collection, slightly modified, as Blogger Rat. Maybe. I could put a more generic design on the computer, or even take special orders and customize it a bit.
Just thinking... your thoughts?RavynRat

TINY STORIES. Here is a printable version of a flyer for the project for anyone willing to tack one up somewhere http://www.lisasnellings.com/tiny_flyer.pdf I'd be interested in hearing about where you put them. We'll see what happens. Thanks to all who've mentioned it on their sites. You're so very cool. 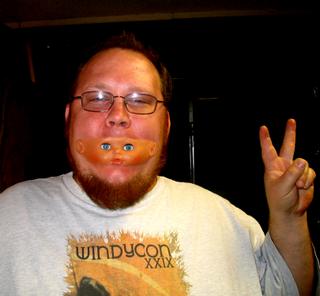 I should probably think about taking a break from watching the news. Sometimes we have to do this. We're here, snug in our home, only minor stuff going on, and still I can manage to create a black hole for myself to crawl into. Damned brain chemistry. I have no excuse. Sometimes we hates the Lisa, preciousssss. I must get myself into the studio and work it out. It's the thing to do. Already Ben is getting into the spirit of the Halloween season. I could do worse than follow him.
Posted by lisa at 7:17 PM

Spit him out right now Ben!

I like the idea of the Ravyn rat/ blogger. She's very cute and one can never have too many ratties!

I like the idea of the blogger rat, and the customized one is a cool idea too. I would order one, ok not right away but eventually I would.