Looking out and staying in 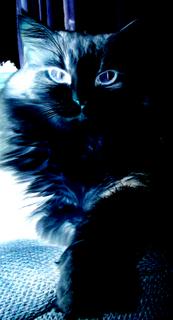 I promised Gurtie I'd send this special photo message to Really Rather Not Nice:

Ravyn is working on getting a printable flyer up for Tiny Stories.

Orion is getting sleepy, watching Samurai Jack.
We spent the afternoon working on our diving. I think, hmmm, his form is now better than mine. I'm thinking of how I might get some underwater photos..
Later, I'll be watching Hurricane Katrina. Growing up in South Carolina---a lot of that time spent on Edisto Island---I have a great respect for hurricanes. When I was a kid I used to have a recurring nightmare in which my family frantically lit bonfires on the beach to hold off the waters. And I've been in some serious storms, but nothing even approaching this.
I'm sad, fearful and awed by this storm. Oddly, just last night, by pure coincidence, I finished Rick Shelley's short story, "Eyewall" about a cat 5 hurricane on another Earth-like world.
And I love New Orleans. It's the city I've visited most. It's where I met Neil Gaiman and Anne Rice and made gravestone rubbings with artist Jeff Coleman. It's an old and fragile place. I can't help thinking of all those above-ground graves.

There's a fire burning here. Hundreds of acres. The air still carries the unmistakable scent of burning desert flora and yesterday the sky was colored with smoke all day. A view of the flames on the mountainside is possible just a short drive from here. We have fires every summer and earthquakes are disconcerting and scary. Still, I won't be able to keep my mind off the South tonight. Probably you too. There will be lots of stories in the next hours. Most of them we'll never hear. Some will never be told.

Death is always near.

I know exactly what you mean about New Orleans....it's one of our all-time favorite places, too. Magical, rich and curiously fragile. Thinking about the French Quarter under water makes me very sad. And those magnificent cemeteries......sigh. We should all be sending any spare grace down to Louisiana.

I sleep tonight (just barely) with windows and doors locked tight. I live in Maine, but I fear that no distance is too great for true evil to traverse.

(Actually, tell your hellish feline that I think it's an improvement. She can't read this can she? She doesn't need to know I've really been reduced to a puddle of quivering jelly... At least you didn't paint mime make-up on her...)