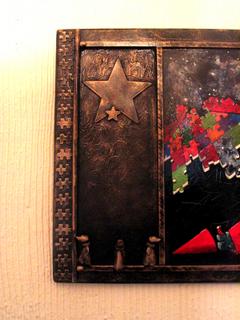 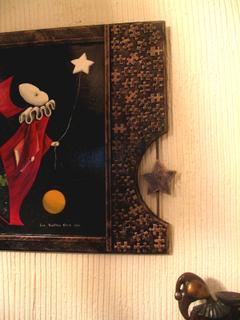 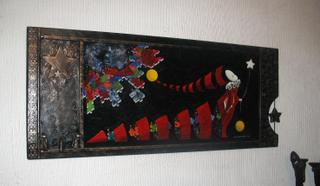 Here is a look at the final version of "Star Play". I decided to incorporate it into a sculpture rather than make a frame for it. This is my first attempt at using Blogger's image software--let me know if you can see them.

I'm adding this piece to my current body of work, which for the first time in my career is rather large (twelve pieces). Maybe it's the influence of sculptor John Kennedy, in whose studio I worked for seven years until his death a year ago. For some reason, he always worked in dozens and sixes.

Twelve seems right for me to open "SlaughterHouse" in the fall. This has been a very intense year and I can't believe that I'm this far along and at the same time am amazed at what it's taken to get this far. I'll be visiting Neil in mid-September and may offically open while I'm there. More on this later.

In the meantime, I have a wedding to do. Phillip and his fiance, Briget, have decided to get married before his pending deployment. They want to have the festivities here at our house, so needless to say we are like a hive of busy bees----the wedding is next Saturday, the 13th.
We are turning our backyard into a setting for a midnight-ish garden party. This is a good thing, as it's been awhile since we've done anything to maintain our reputation in the neighborhood as "The Adam's Family".
Aubrey will be photographing and videotaping.


TINY STORIES----We have extended the deadline to Oct 10th. If you haven't written and were thinking about it, you still have a chance.
We are very excited about this project, having received some excellent stories.

To RRNN: On voices, Hmmm. I'm thinking that possibly some women are reflective at toothbrushing as some men are at shaving. More open to hearing ourselves think??
Definitely not soccer scores...

later, with more pics
Posted by lisa at 8:18 AM

The pics look excellent and enlarge really nicely to view the details. I love how the frame/sculpture portion of this looks like bronze. I'm assuming it isn't but it really looks like a cool bronze framing piece that would weigh a ton. Much more exciting and alive than simply framing it.

Congrats on the impending wedding. I pray for as stress-free a week as possible while preparing for such a wonderful event. I hope it is magical for all involved.

Personally, I think I stand over while I sleep, and whisper into my ear all the things I'm forgetting. I seem to be my most introspective when I first wake in the morning. (or on the loo.)

I don't think this phenomena has anything to do with stray radio waves either, but I wanted to make sure we were exhausting all our possible leads. On my own I discounted sentient tooth-brushes and the idea that you're completely barmy. You don't read barmy. Just Addams' Family-ish.

Did you get the email i sent you a couple days ago?????

i will be home in two days! With a tale to tell, and photos too :-)

You are a brave woman, doing a wedding in a week. I'm getting married in April, and already don't feel prepared enough (and neither does my mum)... Best of luck to Philip and Briget and I'm sure it will all be beautiful.

I met Ravyn! And she's lovely. Also evil, but lovely :) Looking forward to hearing all about everything.

Have I mentioned lately that you rock, Ms. Lisa? Not just what you produce, but how you produce even when life just gets totally crazy... I guess that is one more of the "lessons" to impart beyond thinking for oneself and thinking outside the box... the urge to create, to give birth to one's artistic visions, must not be denied. Or else one will simply go completely batshit.