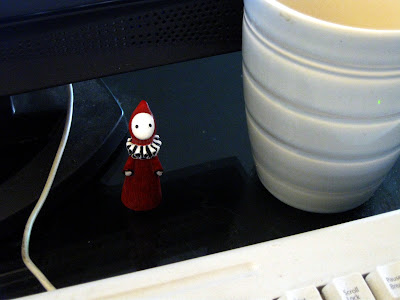 I haven't written for a bit. I sort of went away to do the difficult part of my work. It's not that I haven't thought of you. I've thought of you often in the past week. It's become a habit of mine, to think of you, my fellow explorers, whenever I find something interesting. After so many years, you've become part of my inner voice, so that in moments of discovery, the words flow with ease and clarity. But not so much now, sitting here in the real world of my desk, my coffee and the tactile comfort of these familiar keys. My poppet stands like a sentinel by the monitor, always keeping me connected to that other place. Is it possible to love a tiny inanimate object? I love this little poppet most of all my poppets. I have a lot of poppets. This one, the-poppet-who-lives-on-my-desk, is the Scarecrow to my Dorothy.
True enough, I realize that what I love is the idea of the poppet. I love what poppet represents just by being a poppet, in the way I love all poppets. I love this one more because we've been 'there and back again.' If you've ever found yourself smiling at a poppet through real sadness, you likely love a poppet as I do. If not, you likely think the rest of us are a bit whacked. No worries. We are.

Anyway, I didn't even mean to go off on a poppet tangent. It's just that I see it there, looking at me as I try to cobble together a couple of sentences that make sense.
It's difficult to write about a thing when you're in the thing. Or---it's difficult to write it well. The thing I'm in is a creative transition. No, it's not climbing a mountain. But yes, it is. Just a mountain of a different sort.

Sigh. All of this sounds overly dramatic to the point of stupid As I said, it's difficult to write well about the moment one is in. Still, this is the stuff I'm supposed to be telling you about. Let me reel in the poet and let the geek speak for a minute. I seem to be in a major transition. I don't know this yet, for sure, but, yes I do. My vision is shifting. Again, not a big interest to anyone except others who explore inner spaces. But it is a big thing for me, because a vision shift is like the tide rising---it lifts every boat. I don't know yet how the art will be affected. But I know that in twenty years I've had only one other experience like this. And my work changed a great deal then.

So that's where I've been. It's not the sort of change that can be worked into the schedule, like finding a new technique or medium, or starting a new project. It's the sort of thing that takes over, so that you have to stop for awhile, and breathe and rest and think. It's not the sort of thing that you decide to do. It's something that happens when you don't expect it, like yesterday's earthquake.
---We're okay. We have a lot of crooked art on the walls but nothing actually fell. We huddled in the doorway for a minute that was bigger inside than out. Slow motion is real.
A 5.4 doesn't seem like much until it's close. Then, wake up.

So that's where I've been. Traveling fast and far through unfamiliar inner spaces, contained in a body walking on shaky ground, in a little pellicle of desert, on a world at the edge of a galaxy, hurtling through an ever- changing universe.

Janet: Exactly. Normal is relative and subjective. Sound's like you're coming back from some chaos though, and into some new happiness. Thanks for checking in!

Been working out of the summer laziness phase and into "continue-ing animations" mode. Working on a science fiction anime one and the Messenger one currently, then I am going to start seriosly pondering the Halloween one...

I have been through that vision changing experience once...or at least a miniature version of it. Long ago in the days of elementary and middle school I did stop-motion animation (which I still love) though it was typical action figures...nothing really what I wanted to do but I went along with it and then suddenly I just really wanted to animate my things. Slowly put down the batman action figure and went into cartoons, bringing together my new 2-D setup for new things to make things from mine (and sometimes our) brains. It more switching of mediums than switching of visions though. That has yet to fully occur.

Glad to hear all is alright! I have another 'internetical friend' as I call them in LA. Posted about the Earthquake on facebook yesterday.

Messenger animation is going well. Will be needing the photo of "Night Bird" soon, but not quite yet. I am animating the Stange Fish swimming right now.

Happy to read nothing wrong happened to you.:) Hope your transition will bring you a lot of joy:)

I notice I say 'things' far too much in that comment...

lets switch the first one to "my own ideas"

and that second area "things to make things"....switch that out with just animation.

Apologies. If I didn't correct that it would haunt me for a week and a half. lol

J.W.B.: When did you create your first animation?

The Old Maid: Everything is always changing, for sure. I think we don't recognize most transitions while we're in them. I consider them part of the human curriculum. I hope my work will grow. I sort of expect it to. Thank you.

J.W.B.: Not to worry. This blog and it's readers are very very good about 'hearing what you meant.' If they weren't, they wouldn't put up with me for very long.

I made my very first animation in the form of a post-it note flip book in the elementary school cafeteria in third grade. I believe, if I have the years correct, I recently saw Tim Burton's "Corpse Bride" and it had completely puzzled me for however long I had been thinking about it and one day I am not sure...it sort of clicked, and a took at a post it in my backpack and drew crude stick figures fighting. lol. I then went to the library to be sure and my theories were confirmed. Then I did lots of post-it note animations...then I found use of an old video camera for stop-motion, and then rest is history! lol

I have been animating to some extent for like...six years? But I stopped for a about a year when I couldn't figure out how to expand upon flip book animation.

Just looked it up- must have been a trailer for Corpse bride or I was in fourth grade...can't recall totally but I know I had Corpse Bride on the brain when I was trying to figure out how it worked...

I think I know what you mean...when it is hard to write about something you are in. Almost like the words are not thorough enough, too small to even begin to describe.

I'm glad you are okay, rising tides and quaking earth and all. May your transition be positive.

I'm realizing that I'm bigger inside than out and I don't think I like it. That's what I've been up to.

Thanks for putting it all down and sharing. The times when things are unclear seem to hold so much potential it can be paralyzing. I'm glad you are moving through the inner spaces.

Kelly: I agree. The right words can't be found in the moment. I'm not sure that language exists. Eventually, it may appear in the art, but I can't be sure. I've learned to accept it for what it is. Otherwise, I'd be in a perpetual state of fugue.
I believe that finding out that you're bigger inside than out is part of the human curriculum. I also believe that you can think you know what that means until you know what it means. Once you know, then you understand that what you thought you knew wasn't it at all.
And anything that changes your vision can make you feel like you just stepped off a cliff. Not to worry. You're among friends.

Melissa P.: Thanks. You often state very elegantly what I spend paragraphs stumbling around. Potential that is paralyzing. Like stepping through the back of the wardrobe. Like the earth changing under our feet. At least for a moment, we freeze like the deer in headlights, like a beagle before the Great Pumpkin.

"Stepping through the back of the wardrobe"--I like that one. And I was thinking about the way these bigger earthquakes leave me feeling like my equilibrium has been temporarily disrupted as I keep sensing movement long, long after the quake has passed. When our inner world is jostled or shaken, I think the same thing happens. We are overly sensitive for a while. If we can manage it, I think the trick is to channel that sensitivity. But like most things, easier said than done.

Good luck with your transition!

Wanted to let you know, the poppets arrived, they are safe - although maybe a bit scared of the cats. I think I will accommodate them in my private meditation space for a while, see if they like it better.

(The cats are crazy. But harmless.)

"Is it possible to love a tiny inanimate object?"

Absolutely! Way back in the 'in between years' I am certain that I had the belief that a day would come when I would no longer feel such strong attachments to inanimate objects. That the relationship I shared with my Teddy Bear as a child would never be replicated, in a sentimental way, with any other object.

That belief might have lasted all of twelve seconds. In my early 40's I am seeing no end in sight to having an emotional bond to certain objects. And I'm glad of it. I'd hate to be "normal".

Along with everyone else I am excited for you and will be watching to see if this shift does turn into a major transition in your art. I have always felt like visiting your site and enjoying your art is a journey, more so than many other artists I admire, and I cannot wait to see where this journey leads next. It is always exciting.