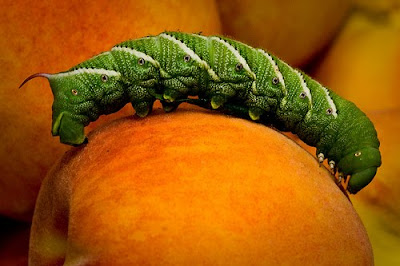 I've written before that the beginnings of summer always feel like the beginnings of a science fiction story. This year, that feeling is stronger than ever. We went out early to tend the tomatoes. Found four tomato bugs. At the moment, the bugs are in an empty planter with some leaves, away from the plants. They're freakin' huge, these things, and to me, they're freakin' adorable.
Except that just one can destroy an entire plant overnight.

You can see my dilemma.

It might seem a bit insane to try to grow vegetables in this climate. I might agree. Still, I think we need to try. It seems important. So we found the bugs, treated for mites and moved some of the larger plants outside, in part sun under one of the shades. The secret might be in finding the right balance---enough sun to grow, but not so much as to burn. A tall order in this place.

There was a 5.9 in Baja last night. Orion seems to have lost his fear of little earthquakes. He described the shake and roll of his bed like it was an adventure.

It's challenging to live in a place where you're constantly reminded that the very ground underneath your feet isn't stable. That life on this planet is fragile and changing and tenuous. It's a beautiful awareness, in that it teaches us to appreciate the now and the here. It's an awful awareness in that it can keep us awake at night, fearful.
There are many things to be fearful of, but then, there always were.

I don't really know which came first for me, poppets, or this awareness. I know that in my mind they are inseparable.

There are some waiting in the studio for me. I'm going there now, to see if I can get my thoughts in some sort of order.
Posted by lisa at 9:31 AM

I'm growing jalapenos. I move the pot out into the sun and back again, into more indirect light, every few days. When I leave it out too long, the sides of the jalapenos end up looking like they were roasted in the oven. Charred, even.

This was a very thought provoking post, Lisa, thanks :)

kelly: thanks for answering. it's meaningful and comforting to me that you're here.

Huge and voracious, those bugs. I try to keep in mind that they do become the Sphinx Moth and go on to pollinate so many plants. I'd like to think that others are looking past this stage of Me and seeing the thing I will become.

Have a productive day in the studio!

Melissa: Thanks. Good analogy too.