Are we talking to walls? 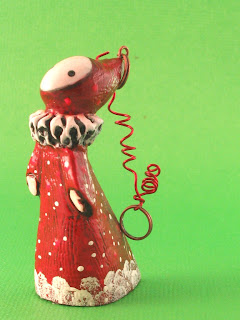 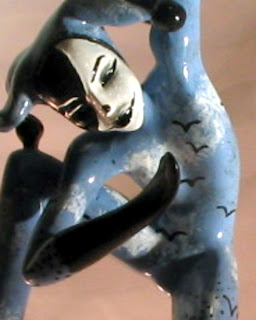 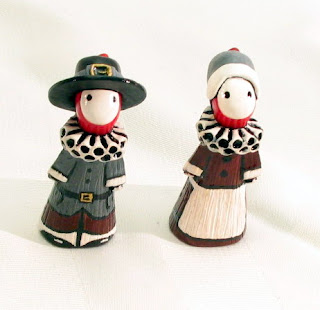 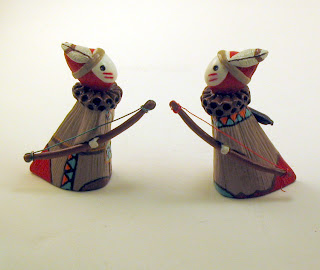 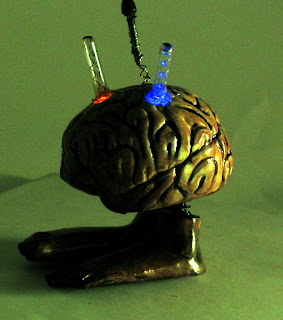 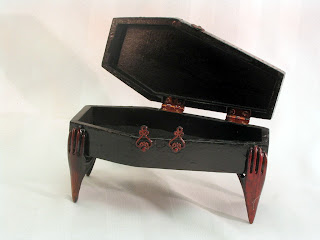 There are nine televisions in this house. Nine. As I type this, I glance at one of my Del Rey copies of Fahrenheit 451. It keeps company with my old puppet, the one and only, the inspirer of dreams and Poppets. Above them hangs a Ron Brown angel in pencil.

but I digress.
Nine freaking TV's.

Fahrenheit 451. The original, the one and only, the inspirer of dreams and Poppets. Will we go there? It's a short trip, isn't it? Once our computers and televisions are married into one entity? And that will happen, you know. Sooner than later.
At what point will we begin to communicate with our walls?
I comfort myself (with an almost guilty glance at Bradbury's novel) by reminding me that all of the sets aren't for cable. Some are strictly for games or photography. One is for security.

The concept of Family Dinner and a Movie is very appealing. Last weekend was a long breakfast with "Ice Age." Conversation, Schmonversation. We talked and laughed together. Dinner isn't the time for family meetings. In this instance, we gathered around it. Besides, teens generally consider the casual questions at dinner to be on par with say, interrogations or firing squads. So the little TV in the dining room is quite the positive tool.

I dunno. I'll think on it a bit more. I have my reservations. Convenient and fun, yes indeed! No question. But still, it's sort of like having a weapon. It has its up side, but it's a dangerous thing and must be taken seriously.
Because television is a very dangerous thing. And it's in our homes.

And if we think our television isn't watching us, we're mistaken. It watches us. It watches us every single time we buy something. And generally, we buy what it tells us to.
sigh.

Otherwise....
I walked this morning, enough to sweat. I need to swim. I miss the water. But walking fast, in cool air....
is no substitute. Who am I kidding? Still, it's better than not moving.

studio work moves along. A bit on larger projects and new pieces for the store. Poppets for coffee lovers and ginger bread scented Poppets will be appearing in time for the holidays.

Some new gallery art too, a bit darker around the edges than most. Some long overdue gifts and thank-you's too.

Aubrey is sick and relegated to her bed, with soup and juice and lozenges, antibiotics and comfort movies. Zorcon has a new ball to hang out in. Pets in plastic balls. rolling around the floor. What would Ben Franklin say about that one?
And Orion reads really well now and is so very very tall. How did that happen?
and that's all I've got for tonight.

Hope you have a truly good Saturday.

Labels: Fahrenheit 451 as always, ginger bread poppets, your television is watching you

I adore Fahrenheit 451. It's one of the first hardback books I ever bought with my own money, and I also have a first edition.

Frighteningly real, and closer than we realize. Censorship, something I'm very very familiar with, but that is a long story that I've already told, and it's well to be free of it now. Unfortunately, it is still ongoing, as a letter from my mother brought back to mind today.

She is so mind-bound (brainwashed) and self-censored that she is incapable of real love. A human tragedy of the worst kind.

You're right about brisk walks. I took one today too, it was a gorgeous day here.

You lost me with the want-ing-ness of the INDIAN POPPETS.

"A few bombs and the "families" in the walls of all the houses, like harlequin rats, will shut up! In the silence our stage whisper might carry"

Do you have so many TVs because you are hoping for harlequin rats?

I look forward to talking to my wall. My computer. My Home...
They're all going to be the same thing and I do look forward to it.
I'll go one further and say I look forward to the internet connection that's going to be installed straight into my head. Where's the line? I'll get in it right now.
Its the walls having ears. And Eyes. Its the self censorship imposed by knowing you're being watched, monitored, judged. Of living in a fishbowl... Ugh... I'm spinning!!!
Interconnectivness is a double edged sword to be sure. Still, I pity the poor wage slave working for Big Brother that going to have to watch me looking at porn on the net. Diligence can be its own punishment...
Bent.

We have two TVs in the house, neither of which are connected to cable. Gave it up about five years ago, and haven't missed it. We get over-air broadcasts, but only do so a few times a year (most recently to follow election returns and cheer election night speeches). Any shows I want to watch, I buy the season set on DVD. In the end, it's cheaper than the cable bill.

I have a huge number of DVDs, both movies and TV season sets, as both Catherine and I love to watch movies. Friday night is movie night (or TV episodes if we're burning through a show - Doctor Who Season 4 is next). Alia can watch a movie whenever she wants; she binges when she gets a new one, but otherwise only infrequently. I think it's been three weeks since she last turned it on.

We had similar TV "non"-watching habits, LOL. And now that i'm in my own place, i don't have cable TV service at all. i have one TV in the house, that is for DVDs and games :-D . i was able to watch one of the debates live on lulu.com and i get my other news online. i have a decent collection of DVDs and family and friends i can borrow from if i want something different. It's working out pretty well.

Uh and i credit Orion for my current obsession for Super Mario Galaxy **chuckle**.

Yes, I think we should always be very mindful of our Screens. All of them. I took my TV out of my bedroom, and that was an improvement. But I think my computer mocks me sometimes... Well, it's ironical, like so much else.

The Poppet Cafe is just delightful!

stacey: censorship is sometimes quiet and insidious, especially our censorship of ourselves. Surely we must choose words and actions appropriate for the situation--e.g. things we do and don't say in the presence of children, or in public, for the sake of courtesy. But the walls around us don't get built overnight. They happen gradually, over time. We may not realize they exist until they're so tall we can't see over them.

mordicai: thanks! those are fun. we intend them to look, well, fake. Like costumes Poppets would make for a Poppet play. It's funny, I was a bit uncomfortable with them---the fear of political incorrectness is a very sneaky form of censorship. Even when I listed them on ebay, I had to navigate around what I could and couldn't say---for instance "Native American" is not allowed. Today I'll go to Orion's first grade assembly. You can bet there will be contruction paper pilgrim hats and feathers.

Drinne: just happened over time. There are also more computers in the house than humans. I believe the answer lies in forethought--using our tools well.

Ben: well spoken. everything has a price.

DavidK: I see your point. I remember when we moved into this house we didn't have cable for some time. I look back with something like nostalgia at those months. Still, it's not a bad thing to keep an eye on the world, as long as we vary our sources and take each with that proverbial grain of salt.
they're all liars. I agree with you that it's about balance. Making good choices. Cable is like anything else, it's the bell curve---tons of crap at the bottom, with some truly quality stuff at the top and a large amount of mediocre in the middle.

Ravyn: yay for Super Mario Galaxy! Orion will be so pleased.

The line between computer and television is ever less distinct.

kuroshii: I'm having a cup right now. It's a love and an addiction. Poppets know that. I'm glad they're watching me. I think...