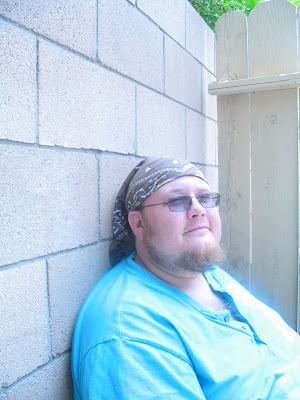 It's here. And we're not ready, shade-wise, and I'm not ready, head-wise. I've been completely immersed in projects and Pete's been working like a fiend, gig after gig after gig. So we've been eeking through household stuff, calling each other on the phone to keep in touch. The canopies I bought are still lying in boxes outside, in the blistering sun.

Angie seems to feel pretty much as I do, but she plows on, getting the studio organized and helping me keep focus, making better coffee than me And Alison, infected not with our desert summer but with the "June gloom" murkiness that hovers over the coast this time of year. But she's working too, designing packaging for our future gift poppets and creating our database.

Ben takes it all in stride, as usual. Just look at him. Sheesh. He says he's never had a bad dream in his life. Sometimes he needs a kick in the shin. He is busily finishing up his turn at three different collaborative pieces. In the next few days, he'll hand them off to me, for my contribution.


They're like brainling children, these collaborations. Possibly that's why long-time collaborators begin to seem very much like family.


We'll be having a sale beginning on May 23. In honor of our summer-dread-madness, we're calling it BUG OUT. There will be lots of bugs. The Poppet studio will be somewhat quiet this summer while we make other things, but there will be a selection of Poppets always in the eBay store, and a few spontaneous one of a kind Poppets here and there. 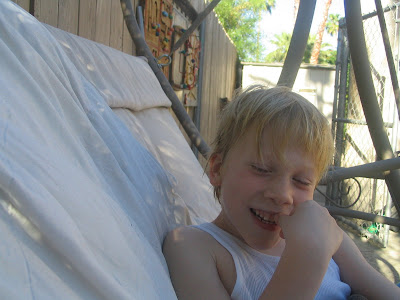 Otherwise, we will work on projects, hide in the dark and in the water.


I got this great shot of Orion before he realized I was pointing the camera at him. Lately, when he sees the camera he either runs or makes a silly face.

I recognize this camera -avoidance phase. Aubrey is still in it.

So the heat is on. Not the crushing depression---just the nod of recognition it so unerringly demands.

Its the work that keeps us sane. And the closer look, (which is bigger inside than out.)
Except when it doesn't. Then we must flee for a reset.

How about some company for "Hell Season" in early August? hehe

What is it about people and cameras that make them wig out and run for the hills? I mean I don't love seeing my pictures taken either, but they turn out much better if I go along with it than if I am trying to duck and cover.

I say this every year because I think about it every year and that is that I cannot fathom living in dessert climes. I am already miserable because it is in the 80's and work is really hot. I would be such a whiny, melting baby if I lived where you live. I get blubbery just thinking about it. I've got to have more midwestern or northern climes. I'm such a baby!

I look forward to the random things that summer brings but even more so to the changes/creations this fall...especially because the weather will be getting better by then!

The only great thing about the weather in early August is the late night swimming.

Mostly, we realize how fragile and tenuous our human claim on this planet is and how dependent we are on technology for comfort and here in the desert, survival.

If summer goes as planned, there will indeed be some interesting creations.