Grapefruit and How to Kill an Idea 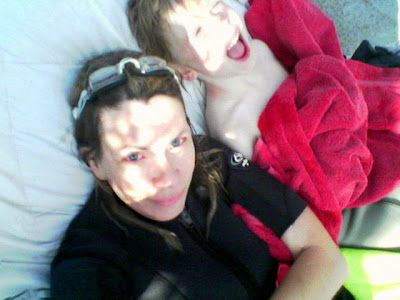 This afternoon found me eating a grapefruit over the sink, trying to decide how to fend off this latest idea assault.
It's the second of the day, the first occuring at about 5:50 am.
It's that time of year again. Orion and I are swimming in earnest. In another week the water will've warmed enough for everyone else.
As always, with the change of season, the vision imp arrives, this year like the lion's roar.
So I'm there with my grapefruit slices, leaning over the sink because I don't want the comittment of a plate.
A plate means I'm stopping to eat.
Not happening today. Instead I'm deciding whether to put this one in 'the notebook' while the previous one is burned into Memorex.
So, here's the thing--writing an idea down can lead to its death.
I have only loose theories about why, but I have experiences.
Many ideas should, without a doubt, be written down. But some should not.
Herein lies the choice.
If this particular vision is the latter sort of idea, it won't survive being put on paper. Like Dorian Grey in reverse, the ink is archival but the vision will fade into oblivion.
By the time I clear my grapefruit carnage, wash my sticky fingers, I've decided not to write this one. Instead, I toss it into the mental soup. I likely won't be able to recall it intact later , but it's in there, like some sort of strange DNA. It will stew there with other bits, waiting for the right sort of spark, then POOF! it combines with other bits and something new emerges.
When it works right, the something new is yes, more than the sum of its parts.
It is Bigger Inside Than Out.
That is, when it works that way. At least some of the time, it does.
We pays our money and we takes our chances.
Posted by lisa at 1:04 PM

Labels: How to Kill an Idea

I like to pretend that one day I'll find these collected, disconnected scraps of paper & I'll sift through them THEN. Sorry, future me!

You and your son's commitment to 'before the weather is right' swimming is admirable. Not only is it good for you but I know how relaxing and mind clearing being in a pool can be.

"So, here's the thing--writing an idea down can lead to its death." That is an interesting theory...I guess for you its not a theory because it is proven in your life, but it makes me wonder how that works in the lives of others. I have really been kicking myself lately for not writing my ideas down. I certainly don't devote myself to creative pursuits and yet I still have several ideas, half ideas, seeds of ideas kicking around in my head and I just know some of these get forgotten. Occasionally I'll remember something that I hadn't thought of for a loooong time and then I'll think 'I need to write this down' and never do. If I could only have a mental file cabinet that I could put these in that I wouldn't lose the key to. :)

mordicai: you might, yet I think later they will have different meaning, and they will affect each other.

carl v: That's just it. I don't have that filing cabinet. I know that if I don't write an idea down, it will likely be lost except for its essence/flavor, but if I can't act on it and write it down for later, it will lose whatever exists about it that works for me. This is only true for certain types of ideas. Believe me, I write TONS of stuff down. Most of the time, the notebook is a good plan. So I say, write. Only certain visions have short shelf lives.

I love your confidence, your trust. "It's in there." So important to know when to let it go, when to "capture" it with ink. Lovely, thanks!

kristi: Thank you. It took a long time to figure that out and sometimes I still struggle with it.
But when it works, it's sweeeeeeet.