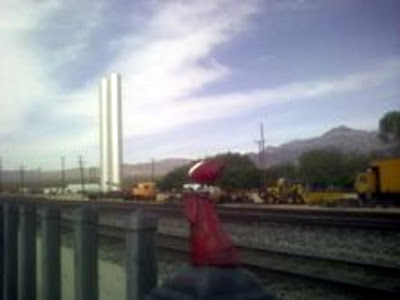 I seem to be surrounded by talented people. Poppets draw them to me.

Pete takes POT photos with his cell phone. He has a real eye for composition and astounds me occasionally with shots he gets on the fly, like this one-- taken en route to Vegas--that has the look of vintage folk art gone slightly surreal.


Ravyn continues to explore in a number of artistic directions. She has one of her tiny (you can't appreciate how tiny unless you've seen one in person) painted horses, this one My Fey Grey Pony. We're working on Foppet's Poppets sets for the Solstice sale; an astronomy pair and an astrology pair.


She is determined to cause me to go blind. 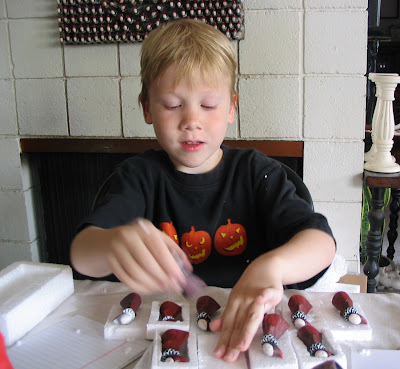 I took a couple of days off to play with Orion.

He discovered playing with Poppets. He says Poppets need little houses. Here they are having naps on mats. 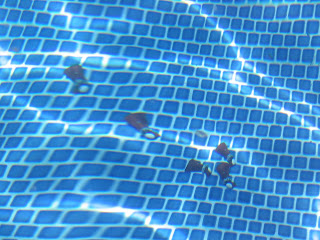 And then
we discovered Poppet Diving.
I suppose it was bound to happen sooner or later.

I thought you might like to see Poppet diving in action, so I shot a couple of short videos, one in the morning, and one at night. I sent them to Ravyn who applied her editing skills. She says she's playing with Night. But here you can see Day... given a whole new perspective with cool music by Hopeful Machines.
Posted by lisa at 7:26 PM

That is an awesome POT photo. I will have to start taking some again.

Poppet Diving makes complete sense. How will poppets react to the semi-aquatic life? Were there any lake-diving poppets I expect we would eventually see the Poppet from the Black Lagoon, greening and algae-covered. A pool-diving poppet probably just tans, though, right?

There are some nifty poppet-sized "paint it yourself" houses at Michael's Craft Store that I was contemplating buying yesterday. Beware if you haven't been into a Micheal's lately though. . . they appear to have landed a new contract and you'll find Martha Stewart's Stepford visage grinning at you from every aisle.

In the meantime, I'm looking for an antique birdcage of an appropriate size (appropriate for poppets, of course). If anyone has suggestions for where to look, I'd be very appreciative.

Great photos and video! Loved them.

Poppet houses 'ey? I think Orion has something there...!

What a great picture of the poppets nappying! My Little Red Poppet arrived today, and I am so enchanted. It really is a delight, and I applaud your ability, creativity, design, eye, etc.