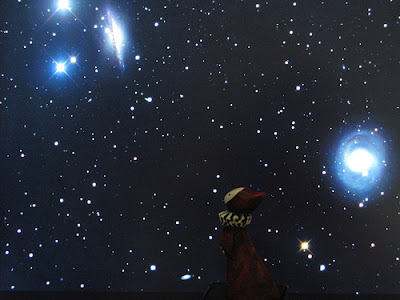 Here is one of my favoite POT photos.

And here is an excerpt from today's email:
Later, with a little more personal time on my hands, I was able to use my scope to pore through the southern Milky Way, delving into infinite depths of light and dark rarely visible from the NE. The sight of all those silent stars peering back at me from such distances, with the rim of the Grand Canyon only a couple hundred feet away, is truly one of life's rewards.
At the moment, the temperature in Binghamton and on the Canyon rim is the same.

The above photo is by SciFiLaura and can be seen on POT flickr along with this one by faerydusted1.
The email is from Joe Bergeron who, gives us a closer look at the night skies.

Hy Bender, whom you probably know best as the author of The Sandman Companion, will give you expert advice through his websites Hy On Your Book and Hy On your Script. He will analyze your project with humor and clarity to rival any Dummies Books (of which he's written five.) He tells me that the word "Poppet" in your email will get you an extremely reduced price for his services. Hy Bender tends to be partial to Poppets, which could work out well for writers who are too. Check it out, forward it to your writer groups. Thanks, Hy!
***************
Today I received this Pape 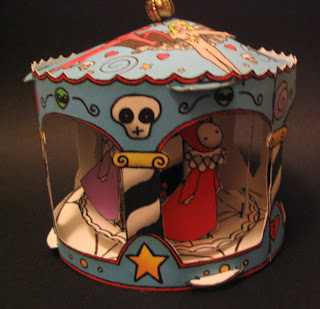 r Poppet Carousel by Robert Johnson Jr. It has a loop on top and when I turn it, the Little Poppets, all in different colors, spin around. This is a very cool thing. All the designs are Robert's drawings. Thank you. It's truly clever and sweet and Poppety. 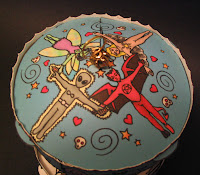 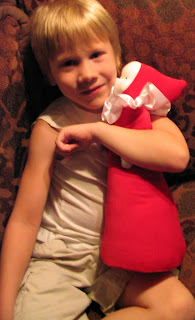 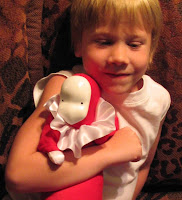 Also in the box were patterns and the prototype for our Poppet Doll, which is designed by Robert and which we hope to release for the winter holidays. Here Orion demonstrates size and cuddle factor which seems to be quite high.


THERE BE BLUE POPPETS 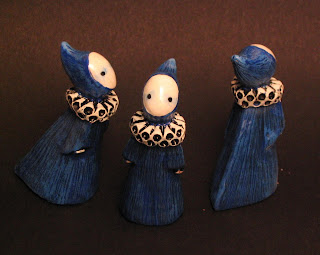 Blue Poppets.
And Red Poppets too. (If these links are wonky--just do an ebay search for my name.) I'm thinking that offering these now, before the Solstice Sale, will allow me to make more Poppets available without making shipping day more insane. Seems like a good idea. And, for some reason, at the moment, so do Little Blue Poppets.
Oh...and Little Pink too.

I knew that must be Joe as soon as it said "Grand Canyon". Our copy of Cosmic Cat arrived earlier this week and the kids keep taking it down off of the shelf -- which is mah-velous.

Today is my Alexander's sixth birthday.

Both of those Poppet pix are great. I love how ominous the Poppet shadow on the constitution is. Very thought provoking.

Blue poppets!!! Woo-hoo. Someone was just asking me the other day when Poppets go on sale again and I told them the summer solstice date...now if I could remember who that was I would point them over today! ;)

On another note, I sent Hy Bender an email years ago right after finishing the Sandman Companion because I was so thrilled with the book. He sent me a very nice, long, thoughful response and I really appreciated the time.

And how could I forget? The Poppet Carousel is wonderfully done.

Chris. Thanks, and thanks for all your mentions. You've made many Poppets very happy!

Happy Birthday to Alexander! Six is a very cool age.

Thanks, Carl. I met Hy at a Guy Faulkes party at Neil's....hmmm many years ago. I've been chipping away at a book project with him for several years. He is informed and articulate and generous.

My namesake! Hence the trinket.

AAARRRGGG!!! We have been out of town, and I missed Blue Poppets. Please tell me there will be more. Do you have a mailing list that gives customers forwarning of upcoming sales? How do I learn more about the Solstice Sale? Can you tell that I am extremely sleep deprived and jet lagged? I need a Poppet Doll with whom to curl up ant take a nap.

Heh. Yes. there will be more Blue Poppets. The Solstice sale starts just after, on Sat 23rd. Generally, I give everyone a 'heads up' on the blog a couple of weeks before each. And the sale dates are on the "Shopping" page of Poppet Planet. I'm happy you like the blue Poppets. cool!

I would like to echo jjterlouw in the arghh statement... I was sad to come late to the sale...ze blue poppets are exzeedingly cool... as is the Plush Poppet.. definitely a must when it comes out.
...
Like the vamppop and merpet, gigantic mutant "plush poppets" have been the subject of myths and folk-tales in many diverse poppet-cultures throughout recorded history. Now rumours of Lisa Snellings-Clark's "Poppet Dolls" leaves poppets worried and sleepless wondering... where will the giant poppets appear next? are the rumours of their voraceous appetite true? could they possibly share ancestors with modern poppets? were these the creatures that built the pyramids? has the government covered up their knowledge of these sordid creatures? can they fly? do they have special powers of the mind? are they even real?