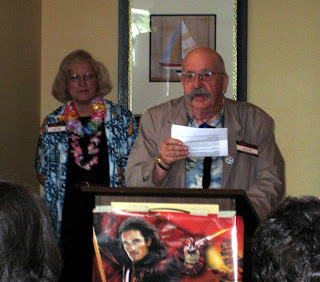 This past weekend, Gene Wolfe was inducted into the Science Fiction Hall of

I have two things to say about Gene Wolfe:

The first is that I've read more of Gene Wolfe's work than any other author. (I read....a lot.)
The second is that I'd do absolutely anything Gene Wolfe asked.*

*with the exception of whatever ridiculous and humiliating thing he might conjure up after possibly having read this post.
If you haven't read Gene Wolfe, I would recommend starting with Storey's from the Old Hotel. The stories inside are tremendously varied and there's a good chance you'll email me later to tell me how grateful you are for sending you there.
If you want to try a bold tack, read The Shadow of the Torturer. If that one hooks you, I envy you, because you're in for a long ride from which you will emerge changed. I'll want to know if that happens.
More on Gene Wolfe. 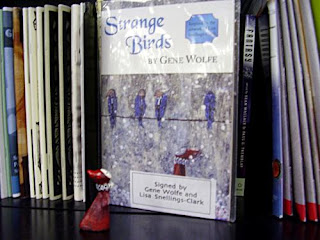 Coincidentally, John Klima sent me this photo, which he titles "Poppet Contemplates Self."

I like it. It has Gene Wolfe. It has Poppets.

John is editor of Electric Velocipede. Check it out. I have issue #11, which I thought was good. John is looking for persons to help produce the EV. If you're interested, there's contact info on the site. 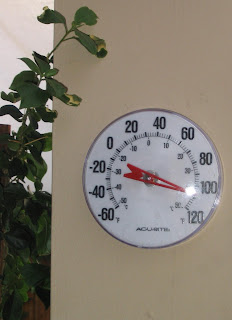 We swam in the evening when the light was fading and the bats were waking. We stayed in until a perfect crescent moon appeared and Venus, and suddenly a whole host of stars came out and our fingertips were prunes.


Here's the thing. It hardly rained at all this year. And, by July, we'll need another thermometer, one with more numbers.


I didn't sleep well. Two nights now. Dreams. I woke, thinking it was 9 a.m., but when I shambled out of the bedroom, it was nine p.m. and there was a party. The house was party-lighted and there was music and people milling around with their drinks and dressed for dinner. I could hear the ice in their glasses and bits of conversation as I wove my way through pairs and groups looking for Pete, or Orion, or Aubrey, or anyone who could tell me what in hell was going on. Some guests acknowledged me with smiles but without recognition. Most looked familiar. No one seemed to mind my pajamas. I began to lose that subconscious sort of acceptance, that sense of observation one has when dreaming, and real panic set in as I finally realized I was wide awake, twelve hours off and extremely confused. My heart pounded and I felt dizzy and short of breath and suddenly, I opened my eyes. It was 9 a.m. and the bedroom was filled with sunlight.
That was yesterday morning. This morning I had the same dream, with orange pajamas, not gray, and I awoke to Orion, who'd climbed into bed with me (Pete has an LA gig) and slept with his feet on my pillow in a familiar room once again filled with light. My heart was pounding.
Generally these types of dreams come in threes. Now I have Gene Wolfe on my mind, three could get really weird. Perhaps I should watch TV instead of reading myself to sleep. As if there's no potential for weirdness there...

I may not sleep for days.

I remember what I dream rarely, but just often enough to be frightened of all the dreams I'm forgetting.

Lisa - The whole weekend was like a wonderful dream.

We've had this conversation before, but its worth having again. I first became exposed to the work of Gene Wolfe in the two book series: The Knight and The Wizard, both of which I loved and count as two of my top 10 fantasy reads of my life. I have also read some great short stories by him. I know that I need to get to his more well known works soon as I am missing out.

Whenever I see pictures of Gene I smile because he looks like he could be a brother to my uncle who passed away recently.

One of the very best moments of the entire weekend happened on Saturday evening at the induction ceremony. After giving a moving and wonderful presentation speech for Gene, David Hartwell introduced Gene Wolfe to the assembled crowd which proceeded to give him a standing ovation (the only one of the evening). Gene was so moved by this that he was almost at a loss for words - something that doesn't happen to him often. His daughter Teri Goulding was also able to join us, which was an extra special treat!

It was indeed a special and quite wonderful weekend.

Dan Guy: thing is, the dreams you forgot..are still in there, waiting.

Carl: you are missing out. But I'll tell him what you said about The Knight and The Wizard. He'll like that.


Jordan's Mom: Thanks for the photos. So cool that you were there.