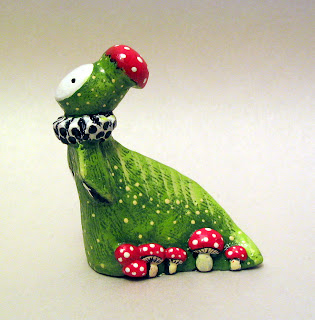 I've decided not to have another gallery sale until the Halloween season. I need to catch up on other projects though, of course, some of those have Poppets.

In the meantime, I'll be making a few Poppets available every week, especially from the Alice in Wonderland and Midsummer Night's Dream series.
Poppet plays "Caterpillar Amanita"

I chose this mushroom because I (like many others) love the way it looks. But in researching it---which is part of the fun of making art---I learned some interesting things. Read what Tom Volk has to say about this little mushroom and those darned Viking beserkers! 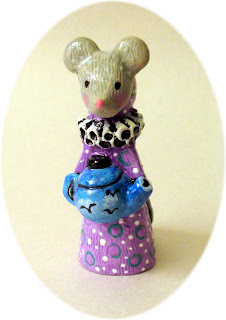 There's no mention of blackbird tea in Alice in Wonderland. But Poppets are creative little things, and will create their costumes according to their own inspirations.
And you know how Poppets love the skies.
Poppets on Ebay will get you there (possibly.) If not, my name will find them.
I've been feeling bad for weeks and weeks. I kept thinking it was the heat.
The heat's certainly not helping.
Then a couple of days ago I realized I wasn't wearing my apron. What?? When did I stop wearing it? Why? I'm not sure. Possibly because the heat drove me out of the studio and onto a table in the den, limiting me to working on smaller pieces that are less messy. Possibly because subconsiously I link the apron to the studio space.
I put it on yesterday. It felt good. I felt like me. I have two aprons actually, nearly identical, practically every inch filled with several years of paint and I-don't-want-to-guess-what else.
I can tell them apart.
My aprons have been my uniform for nearly a decade. My self-image tends to wear an apron (and holds a cup of coffee.) And now I'm convinced that the apron is the source of my super powers.
Well. That explains That.
I'm interested to see how the next few weeks go.
Sheesh. What was I thinking?
g'night
Posted by lisa at 7:47 PM

That first one is so awesome! I'm chuckling goofily as it is just so much fun. You're so creative!

Gotta wear the costume to get into character.

Oh, I LOVE the catepillar/mushroom one! Beautiful!

the caterpillar is awesome, but I HAVE to have the doormouse!