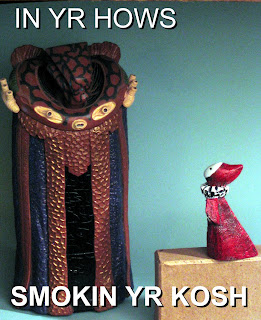 Obviously your artist is taking a day off to play. I begin, sort of, to learn to play LOLpoppets. There are now a dozen or so various photos on the LOLpoppets on flickr page and Spare Parts.

(More will likely appear once readers return to the workplace...)

Orion and I are celebrating today simply with Pizza and Gamecube and soon, night swimming and underwater photograpy.

Underwater lomography actually, with a "frogeye" (a gift from Mimi, whom we seem to have adopted (ok, drafted) ) as the studio's resident HAC (hot asian chick.)
I have no idea what sorts of images we'll get.

It's just the two of us, as often is. Pete is in Northern California for the High Sierra Music Festival---he took a Hippie Poppet and a LRP for POT. I'm looking forward to the pics. Aubrey will be 16 this month, so is anywhere BUT here these days though there is the occasional sighting. Ben has been gone for nearly two months, moving into his house---which is a very cool old Palm Springs house---but should be back soon.

So now we are donning "glow" bracelets, and goggles, mostly just for fun. Later, Oreos and ice cream, and fireworks viewed from the hill.

Happy Fourth of July
Posted by lisa at 5:51 PM

Happy 4th..or rather, 5th...to you as well. Sounds like a wonderful day off. Playing is so important, I'm very happy for you.

I don't suppose there are any Neil Rats left are there...

Hi Lois: The rats aren't available from that site, but, as I posted about today, I'm making an effort to get them up and running again. There are a few on ebay right now, and I'll be adding more throughout the summer. We hope to establish our own shops in the future, but for now ebay seems to be convenient for everyone. Thank you!

Carl: Thanks! and you're right. If you catch me not playing again, I'd appreciate a good whap on the head to remind me.