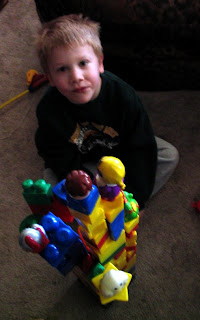 It's weird, not waking up every morning to head straight to the computer in my pajamas before the coffee is done to work with Ravyn on Poppet Planet for several hours before the 'day' has officially begun.
Then to work on articles and schedules and correspondence.

Sometimes it's necessary to spend a large amount of time on things that support the art instead of creating art. It's more than necessary. Seeing other creative people sharing ideas and links on the Poppet Planet forums tells me it's worth it. It's like working with authors---never in the direction I expected and nearly always better.
Still, when I go for too long without tapping into the creative force, I start to feel sort of thin and empty and not at all like the self I know.

A fortune teller named Jack waits for me, and a painting for Peter Beagle's Strange Roads. (btw, I read his novelette, " El Regale" in the Oct/Nov issue of Fantasy & Science Fiction. I fell once again under the spell of his funny and heartbreaking voice.)

Yes. Much work to be done and there's a pig's skull waiting to dance.

In the meantime, I'm catching up on other important things, like making block towers with Orion, who turned five on March 19 and is learning to add, and ride a bike.

On Sea Monkeys: Apparently sea monkeys do have expiration dates, as mine floated on top of the solution for three days, not at all turning into monkeys of any sort but turning the water green. And yes, I followed the directions correctly.

We swam on St. Paddy's day. It was clear and bright then. Now it's warm and stormy. Weird today((in a good way) in the car with Aubrey, listening to The Shins with the clouds moving fast enough to be creepy and the palm trees bending this way and that. Our own trees are loaded with orange blossums. The air is full of birdsong and bits of drifting fluff and petals and a fragility that, once noticed, never goes away.

We'll be sending out lots of Little Red Poppets in the next few days. I'm looking forward to some POT photos, hoping for a video or two and then, I'll be in the studio, welcoming me back.

Xander turns six in June, and Molly turned four in February. I think we have that same blogs. Lately they've been building castles at night when they're supposed to be asleep.

Maybe they wanted to celebrate St. Patrick's day too!

My eBay confirmation has come! Yay!

I hope my poppets turn out to be bookish ones, as they'll be living in my library. Hopefully that might keep them out of trouble... for a little while.

Orion looks so grown up now.

I am soooo looking forward to April. I'll finally be done with having every weekend crammed full of stuff and can devote myself to Poppet Planet, my site, visiting other's sites, etc. It will be so good to get back to some form of normalcy.

The mention of Sea Monkeys brings back such fun childhood memories. I remember being so excited about them, having strange visions of what they might look like, etc. Very interesting marketing back then. Fun.

I've been wandering through your blog all morning, and it's been like a strange but fascinating dream. :) (I read a bunch of your Halloween stories.) I am enjoying your sculptures and your writing. Palm Springs is my hometown, so it was a bit surreal to read references to it, too. Anyway, I just thought I'd say hello to a fellow sculptor. :)

Hey, Lisa, I was thinking that the difference between a successful professional artist, and an amateur who someday hopes to be one, is that the pro has a ton of that supporting stuff to get done.

It's the evidence and proof and substance of success.

I figured that might make it a little easier for you to endure.

Dan guy: try building stuff from blocks and grapes. That can get intersting.

Michelle: I think you're right

K: Poppets are indeed bookish.
On Orion---will post a photo of him in wetsuit to compare to last year---when we're well


eirewolf: Thanks! Then you absolutely understand my love/hate relationship with the desert


Insectivorous: Then, from now on I'll consider myself hugely successful. Thanks for that

"eirewolf: Thanks! Then you absolutely understand my love/hate relationship with the desert"

Yes I do. The desert is amazingly beautiful in its way, but now that I'm gone I don't want to live in that wretched heat ever again. :D I still love to visit sometimes though... I love to drive in and see "my mountains." I do miss the ever-present mountains, and the scent of the desert in the rain.