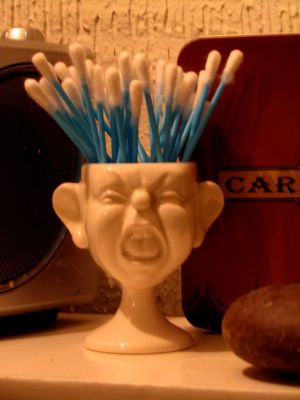 Pete, otherwise known as aquaman is still in San Diego, so it was me who played follow-the-leader with aquaboy. This mostly consisted of following him all around the pool, to the drain on the bottom, out the sides and in again via a variety of slap-sticky maneuvers that required words like uh-HAAHT and burrrrrfurrrglalalalalal and ffffffWOITTTT and made my suit ride up.

I should sleep well tonight, finally. I’ll be sore tomorrow and glad for it. I haven’t worked that hard underwater since my last real rescue lesson. I’ll admit I’ve been in a weird state for awhile. The conflicts in the Middle East grow more disturbing as does other news. Ben has been quite sick for several weeks and I lost an old friend to a car accident. I hadn’t seen him recently, but we were good friends and next door neighbors for a number of years. Ed helped me build some of the early Dark Caravan pieces, and the Ferris wheel is made from parts of one of his boats.(Ed’s boats were very nearly ships.) Later on I’ll dig out photos and tell you more about that.
But not today.

I'm so sorry for your loss and yet am happy that part of his lasting legacy is involved in your work. The Dark Caravan pieces are all so fantastic and are part of a great tribute to him.

You seem to have had so many friends pass away recently.

Hang in there Lisa.

I think I grew up in thrift stores. It was something like hunting for treasure. When I was young we hunted for shells on the beach in Panama. Then when we came (back for my parents and my brother) to the States, we started hunting in thrift stores. We still do it, digging through the unwanted to find the strange and unusual.
My husband thinks I'm a little strange for it (among other things).