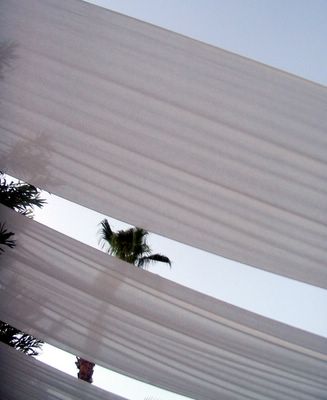 It was a good idea to put these strips of muslin over the pool. They soften the sunlight enough to survive it for more than half an hour.

We started out calling them 'canopies', but over time, we've all taken to calling them 'sails' because that's exactly what they look like in the wind.

Underneath them we tried some underwater photography. We had absolutely no experience and learned that it takes some real coordinating to make this happen. The morning session was more funny than productive, but by the nighttime shoot, we'd figured a few things out and the three of us became a team: One to be the subject, one to shoot and one, wearing weighted shoes (ummm, not recommended attire for the inexperienced swimmer) to keep the photographer from floating to the surface.

We used film, so couldn't know immediately what we got, but....really, it didn't matter that much at the time.

Weighted shoes, eh? That's when you want to be sure everyone's on the same page with the ol' hand signals! ;)

The sails look beautiful - did you make them? How are they supported?

I imagined putting something like that over our terrace, but other things were more urgent (especially as you'd really only need them maybe three days a year in Scotland...)

I'm sure the underwater photos will be at least interesting, however they come out!

What a great idea! And they do look really really beautiful.

I can't wait to see what kind of pictures the three of you captured. What fun.

Thanks again, Lisa. Everything arrived and worked out perfectly.