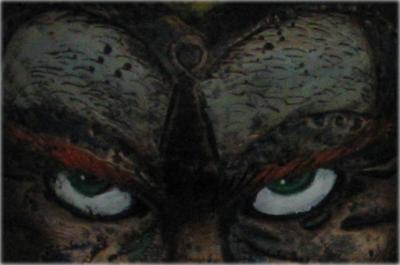 I'm not saying that "Jack" is scary, though some say he is and the Neil's story about him is a little scary. I've never imagined Jack appearing (oh, hello---as I type this a spider lowers herself in front of the screen) I think of being in a dark place and becoming aware of him gradually. You know, the pricking of the hairs on your neck, just making out the whites of his eyes in the darkness, telling yourself it's an illusion you see, light off some old vase in the corner. Rubbing your eyes or squinting won't turn the eyes into some innocent reflection. No, they're definitely there, even though they can't be, and they're looking at you. It's then that you stop breathing. At that very moment you must finally admit to yourself that something is unright in your world. I wrote an essay for Dark Dreamers (Cemetary Dance) about this very thing, horror that begins subtley and grows into an undeniable reality. As I painted this sculpture of "Don't Ask Jack" a few days ago, the desire to make him scary struck me, so I kept the finish dark and subtle but kept the eyes bright. It works really, really well in night's half light. Jack becomes just the things dreams are made of, and the reason night lights are purchased. (Sweet Dreams, Roland and Robert!)
That said, now I've got the bug to make something scary. About time too. It's been awhile. I've enjoyed doing the fine art pieces (i.e. the more esoteric puppet pieces and the food pieces). I intend to keep doing them until I've said what I want to say. But Jack is different. This kind of figurative work isn't considered by some galleries to be fine art, no matter how well executed or what materials are employed. Gorecki's Third Symphony describes a story so effectively that each time I hear it I am moved to tears. And there are other stories that could only have ever been sung by John Prine.
If I'm going to do scary, I can do one of two things; I can paint it, or I can create a character like Jack. Screw the galleries.
I want to do scary. When I'm flying, which I don't particularly enjoy, I like reading something scary. This can be a tall order as I don't scare all that easily. Maybe I want the illusion that my reality is cozy compared to the one I'm visiting. Makes sense.
Yes, it's been a mean summer and I want to do scary. Besides, October will be here sooner than later.
***
Today was Pete's birthday and we've all been so busy and in such a funk over all the bad stuff going on that everybody---yes, including me, forgot. I could have at least got him a pack of Magic cards. sheesh We need to take a slow deep breath and regroup, maybe have an un-birthday thingy for the big smart guy. After all, he's ours and we like him.
Posted by lisa at 8:55 PM

What a wonderful mini-essay in praise of scary.

I definitely thought Neil's story was (at the least) eerie. And sort of elegaic and shuddery at the same time. (Goodness, I'm eloquent today. But I imagine you know what I'm groping towards saying.) There is definitely something in the human mind that needs to be unsettled from time to time, to get away from cosy, to engage with the things half-seen in the darkness.

I want to do scary too - and indeed have been trying to write some scary stuff recently. But I've come up against the opposite problem to you - I think I'm too easily unnerved. So it's hard for me to tell whether something I find creepy will just come out as tame. I recently reread a story I wrote in which I was aiming for mild horror, and was disappointed by how it didn't, in the end, really come across. (There were a lot of other things wrong with the story as well, unfortunately.)

Either I'm not a very good writer, or it's simply very hard to scare yourself. Possibly both, alas. I may be too close to judge.

Eeek! I'm glad we didn't intend to put Jack in the bedroom. He'll be in the living room where we are unlikely to stumble across him in the dark. Phew!

How oddly coincidental, I was just looking through Smoke and Mirrors today, Don't Ask Jack in particular. It had been so long since I read it that I forgot about the connection to your work.

I'm thrilled that you're in the mood for scary, and just in time for October! I am in full support of your 'screw the galleries' statements in regards to this type of art. Anyone can do something simply grotesque, but it takes real creativity and talent to produce something that is scary, eerie and subtle. The subtle kind of scary that you describe is often the most frightening kind. Jack looks great and I'm looking forward to seeing where this scary mood takes you.

As I sit here, reading this,
I might have heard a gentle hiss,
As if some stranger stood and stared,
Behind my back; I feel them there.
And if I read a little more,
I think I’ll hear them cross the floor,
To place their hand upon my arm…
Perhaps it’s just a false alarm.
The silence in my house is thick,
But filled with creaks, and taps and ticks.
That hiss is nothing . . . probably . . .
And yet, I’m scared to turn and see.

Is that your own verse, RRNN?

yjYes it is, and thank you very much. I actually promised myself I wouldn't go posting poetry on other people's blogs because it feels like I'm trying to showcase myself (which dammit, I AM!) whether I deserve to do so or not.

But I couldn't resist it. The Haunting Season will soon be upon us, and this specific post got me in the mood. Glinting eyes in the dark and a sense of creeping, growing horror? By sin, I may need a moment alone.

I actually take my log-in name from the collection of poems I'm currently shopping around, "Really Rather Not Nice Things: A Macabre Compendium of Poetry."

I've been rejected by some of the very best so far, but I march steadily onward.