Let's talk about those chicks in Bodega Bay 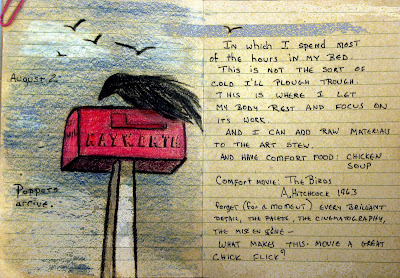 you constantly amaze me, Lisa.

Is it unrealistic to assume that everyone who visits this blog has seen The Birds at least twice?

I've studied it, in fact, watched it from several perspectives, but until this weekend, not as a chick flick.

But there it is, one to watch with girlfriends. There's the vintage aspect, of course, but I'd hoped to open a discussion of the dynamics---not only the sexual tension, but the relationships between the women.

Oddly enough, I don't think I've ever actually see "The Birds" all the way through, which is pretty shameful for a Hitchcock fan.

This will be remedied soon...

Until then, though, I'll just say that I imagine the tension between Tippi Hedren, Suzanne Pleshette and Rod Taylor was thick enough to require a battle axe rather than a mere knife. And I was going to say that 4 of the top 5 characters being female was kind of out of character (heh) for Hitch...but "To Catch a Thief" was at least 50/50 (Grant & Kelly plus Jessie Royce Landis and John Williams).

But yes, am looking forward to remedying my lack of cinematic education and joining whatever discussion develops.

syd: I'm going to try to reign in my impulse to tell you loads of things to look for. Not easy. Nope. Not one bit.
sigh.

I'll look forward to the discussion in the future.

kelly: I do? heh. you amaze me for showing up. thank you for that.

I have seen the Birds several times and studied it but honestly never thought about it from the point of view of a "chick flick".

I think I'm usually distracted by the other meta issues and the simplicity of the use of Birds as symbols with all their complex baggage. I may have also been to caught in the "male view" of Hitchcock to have seen it that way. I believe I shall have to watch it again.

Here's where I sheepishly admit that I only saw The Birds for the first time a little over a year ago. Fantastic, amazing film. But yes, I'm that guy!

And I cannot get past thinking of the pun of "chick" flick describing a movie about birds. Sorry, I'm just a big goofball today.

Love the picture, sorry you are still sick. Hope the rest of the household is faring better.

It's a rich, well-made film for sure, e.g. In the opening scene Melanie crosses a street in San Francisco (where an unusually large flock of gulls are circling)
Just as she passes a SF tourist poster, the filming transitions to the studio---impressively seamless.
Watch it again. Did I mention the color palette? That there is absolutely no musical score?
That Melanie gets the mother she so desperately neads?
Don't let me get started.
I'm still not well. We're under an oppressive cloud cover today. I'm going to float on the water, get some solar vitamins, think.
Glad you like the drawing. I'm very fond of my notebook.

and yes, girls were 'birds'

Love you Lisa! Get well soon! And don't get me sick!!!
Bent.

Oh, and the pic is great.

Yo Bent: so, what's your favorite scene in The Birds---know you must have one

hey Lisa get better :-) . i may have seen the Birds only once and right now my brain is full of latex paint fumes so nothing coherent is escaping, LOL. But i'd love to see it again.

I will definitely be watching it again, probably this fall when the weather becomes perfect for watching movies like this. All 3 of us really enjoyed it and I marveled at the cinematography, etc. when I was viewing it. We watched some really nice extras about it as well. It amazes me how they used 'simple' tricks in those days to achieve such amazing effects. That is one of the things that thrills me about films like LOTR where they went back to tried and true old techniques in addition to the digital ones to create their films. I've been impressed with every Hitchcock film I've seen. It is an understatement to call him a Master.

And you're right, I hadn't thought about the other 'chicks' reference!

I think the only Hitchcock I've seen is The Thirty-Nine Steps, which I found interesting because it is an entirely different story from the book. By which I don't just mean that elements of the plot are changed. It does different things.

Is The Birds scary? I know this is a wimpy-sounding question, but there are things I can read about but not watch...

I saw The Birds at eight years old. I remember the experience very well.

I watched the film on television with my mother and sister. About halfway through, our neighbor decided it would be amusing to tap ever so lightly on the window behind us. My sister cleared the coffee table in a single spring.
Of course, afterwards we laughed like the silly humans we are. The memory still makes me chuckle. Now I appreciate the film for what it is, but that first viewing scared me, for weeks.

Is it scary? It's a lot less "scary" in contemporary terms than contemporary horror films. The film is layered and full of subtle humor and human drama-- the horror is almost a backdrop at times.

There are a couple of moments that will likely stick in your memory and I'd say that most people would say those are scary.
Of course they are---Hitchcock meant them to be---and he was exceptionally good at what he did.
Here's another thing---
I wouldn't even entertain the thought of showing it to Orion before his voice changes.

I saw "birds" when I was very young, too. I think I need to watch it again, in light of this.

I do love your notebook picture.

Got over my summer cold about a week ago, but I'm still hacking up nasty stuff. Eeew.

Aubrey and I put the movie on as 'background' yesterday and had a good discussion about the isolation aspect in this movie, and others. It was easier, in 1963, to create isolation. Technology has changed all that.
Still, we have the isolation of this little bay hamlet and personal isolation as well.
Melanie's mother abandoned her at age eleven and she is obviously affected by that. Annie moved to Bodega Bay to be near Mitch even though the romance was over---she lives in a little cottage by the school that seems very isolated. Lydia openly admits her fear of abandonment since her husband's death. There is definitely a subcurrent of isolation in the movie.

Girls are birds and so were the sirens, back in Homer's time (before they became mermaids).
All deadly and seductive creatures.

Hey Lisa we should watch it next time i'm out there :-)

(for those who haven't and plan to, spoilers follow)

I do understand, Lisa, why you called it a chick flick, or at least I think I do, because the lead female characters are (for the most part) strong and fully dimensional, rather than being passive doormats. And they are all different, one from the other, so we get to see a wide range of feminine strengths...and weaknesses.

There's also a whole lot going on re: the interpersonal relationships, e.g. Annie initially seems (to me) misguided for following Mitch to Bodega Bay after the romance was already ended, and her reaction to Melanie's presence smacks of stereotypical jealous female--yet the fact that she and Mitch are still friends, that she values that friendship and is realistic about it, is not the behavior of a weak and jealous woman.

Isolation is, as you say, a major player in the film, both overt (the examples you gave) and covert, so to speak: Melanie isolating herself from her former life through "good works," Mitch's lack of a solid relationship due to his concern for his mother, and so on.

Whether Hitch intended it or not, it also reeks of the Cold War mentality, e.g., the birds could easily represent the Faceless Enemy Who Wants Only Our Destruction. (I tend to think this is just an artifact of the time, as it seems a little ham-fisted for a director of Hitch's talents. But you never know.)

Finally (for this comment, at least!), there's the whole aspect of humans as storytelling, pattern-seeking beings who always try to find answers, and sometimes make them up for ourselves; this often results in "othering," as we see with the woman in the diner who tries to tie the bird attacks to Melanie's presence, despite the fact that the man from the fishing boat said the incident he experienced took place the previous week, i.e., before Melanie arrived in Bodega Bay.

I'll have to watch it again and see what else shows itself...

Syd: There you go---I didn't see that-- Melanie isolating herself from her former life---but there it is.

I'm happy the movie lived up to my gushing hype (blushing)

On the other hand "I'll have to watch it again and see what shows itself..."

Something will, for sure.