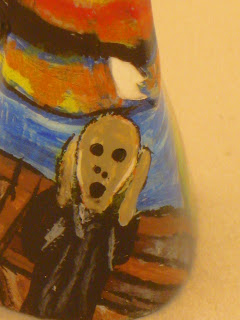 Today we had some errands to run and as often happens, were greeted by the smog that hangs over LA and surrounding areas. And, as often happens, the conversation died away and we looked as it loomed and we thought all the things we tend to think when encountering this thing we created. It is indeed our child, and it waits silently for what comes next.

It blots out the sun.

Next year will be 2010, the year the human population is supposed to reach ten billion. There's a fair chance that for human beings to carry on long-term, most of the ten billion will need to disappear. Some people believe this has happened before, but I've never seen or heard any convincing evidence of this, regardless of how many geek-out hours I've spent listening to science channels while I work.

We are evolving. We live longer. This is no accident, and may serve us well. Or not. We seem to use the time given us less productively, on the whole. Technology is growing rapidly. There are pros and cons. Are people less intelligent than previous generations? More intelligent? I don't know. I do think it's likely that primitive man was smarter than Hollywood would lead us to believe. I also think C. M. Kornbluth was a visionary. Are his marching morons upon us already?

In the grand scheme of things humanity is still in its infancy. In the grand scheme of things it doesn't matter one iota what you do, or what I do. Evolution will meander along its own crooked path. Why is it then, that some of us feel so compelled to help human evolution along? What is it that drives some of us to do that one thing we do and to foist that thing upon the rest of humanity? To even care about a future we personally won't be part of?

What difference does it make, why? Possibly it's because as a whole, as an organism made of the human population, it takes all kinds.
It takes all kinds. Idealists and nihilists. Writers and artists and soldiers and couch potatos. All sorts of genes, all colors and shapes and sizes and visions.

So it seems the best plan is to find which we are and to be that.

So we look at the smog, or the melting glaciers, or the change in weather, at poverty in Afghanistan and Tennesee and we think all these things. We ask, again, these big questions.
What can I do? Am I helpless to affect this situation? I certainly feel helpless. Does it matter?

We talk it over, again. Then we see an Arby's sign. Fuck yeah! Five for five. We're starving, we say. But of course we are not.

Pretty soon, the smog is at our backs and we're headed into the clear dry air of the desert. We've abandoned our monster child without a backwards glance. But the little ghost remains---accountability.

So we'll acknowledge this child as our own, at least on some level, and do what we can. We are bigger inside than out. We are the makers of whatever future comes.

And. Sigh. We are small creatures. My stomach is growling, again.
Posted by lisa at 10:50 PM

Labels: another look at the big questions, LA smog, now we have killed us

Ah...there isn't an Arby's close enough to me, haven't had a RB sandwich in at least a year :|

I think every organism is designed to have a true desire to reproduce and preserve. This, in the Human sense, includes trying to preserve others.

I liked when Godzilla fought the Smog Monster.
That and pudding. Pudding is SWEET!
Bent.

Kelly: if we think of all of humanity as an organism, it seems to make the most sense.

arby's makes me glad to be an omnivore

Bent: ok. that does it. Your therarum appears to be be better than my theraflu. you win.

Wv: sausem
---how we knew there were two monsters---

Funny- I was craving Arby's today and had a sandwich there for the first time in at least six months.

I live in a place so polluted that it has given my allergies after years of breathing it. I'm not alone- I know people who have had to move because of it. In CA, at least most people seem to have acknowledged some form of responsibility for lowering emissions, etc, but here in Utah people still think global warming exists only in politics.

A friend of mine put it something like this: "As it taught us by the holy bible, we are made in His image and have dominion over the Earth, after all we're only here till we go to heaven. It's like staying in a hotel, and I feel obligated to throw the proverbial TV out the window. His will: Done."

Besides, God will fix everything, right?

Lorraine: I don't scare easily, in general, but your friend scares the hell out of me.

I'm pretty sure he was being sarcastic with the intent of shedding light on the people who live in our very conservative and religious community who really do seem to think that way.

Lorraine: whew. I hear you. It has a southern gothic ring, for sure.

Loraine: I grew up in such a religion and I can vouch for the crazy. The just don't care at all about conservation or ecology, disappearing species, global warming... none of it is important, because God will "soon, very soon," cleanse the earth.

It's sickening, and scary.

Sigh. My religion has a thing called "Tikkun Olam" which means that when looking on the smog that we created we are suffering the self inflicted wounds we created because we have failed as caretakers and repairers of the earth, and it's our responsibility to clean it up or we will be falling short of what God expects from us.

I think it says a lot that some people read "dominion" as more important than "caretakers" from the same text the concept of Tikkun Olam comes from and assume that means they have no responsibility instead of full responsibility.

Hell, even the robber baron's believed in noblesse oblige. I think most people ignore the hard thinking part of being religious to embrace the comfy or empowering part, but to do that you have to refuse to think, and real religions work better when they want you to think.

Maybe it's because we don't really have an afterlife, or because we were based on agriculture and herding when we started instead of just belief, but we drill the environmentalism in with the scripture.

It's our job to keep the Earth clean for God not the other way around. Even if you don't believe in the magic sky fairy version (because it's an allegory people!) and God is just the ethical presence of order, it's still something we're supposed to do for that.

Honestly, we have an entire holy day to celebrate trees. My son likes that one best because it's there to remind us that the world is not about us, we are about the world.

Shocked the hell out of the Rabbis when they asked what his favorite holiday was . . . .

The WV is "Unfedil" Someone who is religiously observant but still rational, confusing all sorts of extremists. : )