What do these things have in common?*

A collector commissioned an edition of "Resonant Kiss" and I fell in love with the piece again and made two!

Resonant Kiss is the inspiration for Neil Gaiman's story "Good Boys Deserve Favors." It was really cool to revisit the piece and the story.
(It can be found in Fragile Things.) 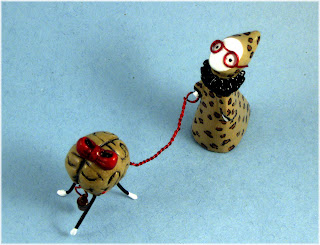 "Marney and Pet" is inspired by old movies I watched while down with a cold. 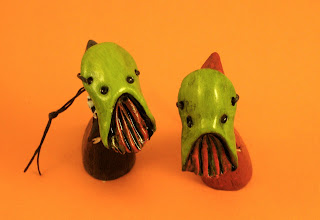 "Pet" is wearing red glasses.
A bit more October in these truly silly Cthulhu masks for Poppets. Though Poppets tell me that in the right light, they can be very scary to other Poppets.
I love that we've begun to slip Halloween on like a favorite old sweater. 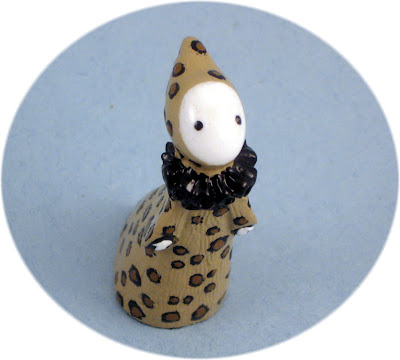 And because Poppets also say(or said, as we watched The Birds) that
Sixties Chic is way too cool for humans, we dressed a few up from top to bottom in leopard print.
You may have noticed that I'm not making many one of a kind Poppets as of late. Not to worry. I'm busy working on other types of art for now, particularly for the World Fantasy Convention. I been trying to decide what sort of programs I'll put together. Generally I do an art tour and a lecture about things that are helpful to aspiring creatives, and some sort of hands-on workshop. WFC's attendees are generally professionals themselves, but I'm thinking even seasoned professionals like to have fun. So now I'm thinking about some things we can do that are both creative and silly---like making art on the spot from ridiculous items, with distraction. Stuff like that.
In between, working on some new paper mache for October. No more theraflu, but still plenty of green tea and vitamin C. What an awful bug this cold has been. If I sculpted the thing, I wonder what it might look like?
Question---ebay now charges a fee for "UK visibility." What? I mean, WTF? Does this mean that if I don't pay the fee, my listings are invisible to people in the UK?
sheesh. And while we're on new and innovative ways to rip people off, I've closed my Bank of America accounts because of their new policy on "transaction sorting." It's the only protest in my power at this point, so I'm exercising it.
How dumb, actually, do banks think their customers are? sigh. don't answer.
*really nothing, except they're all on this blog. If I had to make art from them on the spot, I'd be fairly hard-pressed.
Posted by lisa at 11:40 AM

I have been quite silent and distant this year, just following from the shadows, getting happy when the bright and cheerful things show up and worried when disaster strikes (oh, I read indeed!).

But Cthulhu Masks are just too great for this faithful Servant of The Technocracy to remain buried in his research. They're so awesome.

If the masks are awesome, Resonant Kiss is made from sparkling supreme-meta-awesome made in the LDC (Large Dream Collider). I already knew it, and the story. Oh, it's great to fall in love again.

Sorry for not being very present here and in the forums, but I'm still here sending you all the good juju that I can. This one Technocrat is a big fan of yours (even if the Inner Council doesn't approve)!

Big hug to you, and all the fellow Poppet Planet-Walkers.

You're so much one the Best.

Daniel! You've been missed around here. Glad to hear you've at least come up for a bit of air.

Yes. Reading can be dangerous, as watching the news. Is why we've buried ourselves just a bit in Halloween---early. Because the world is freakin' scary.

---making it extra easy to slip into shadows. I go there, try not to stay too long, and try to turn at least some of what I see there into art.

next life? I want to bake cakes instead.

Lisa - that bank practice is appalling. Can you join a credit union? Mine has been pretty good to me over the years (25).

i have sooooo much to tell you. Hopefully with photos once i've moved :-)

WTF? Don't banks already do that? They've been ripping me off for years. As a poor person, it's not easy to keep that buffer in the bank when you REALLY need to get gas in the car to go to work!

I hate those bastards. If it wasn't so damn convenient to pay my bills online, I'd drop my checking account like a box of spiders.

Lorraine: ooohh.
A box of spiders...
I really like that.

Ravyn: for sure. we'll catch up, for sure.

Loraine - i forget those things, cause i've never had my money in a bank, just in a federal credit union. And i'm a big cheerleader for credit unions, cause at least mine has never screwed with me like banks do. i don't know if my credit union subscribes to that practice but i think i want to ask them, LOL.

Eeeeeh, Cthulhu masks!
Meanwhile I've been trying to re-enact some "Who Killed Amanda Palmer" scenes with the help of poppets. I think they enjoy it.

spacedlaw - i did peek at your flickr page, those photos are a riot! i've been consumed with the preparations for my move so i haven't had a lot of energy to post much, but i love your photos!

Banks, Ebay and Theraflu oh my!!! Cthulhu wishes He were so scary!
Anyways I prefer therarum myself... :P
We're back to making Real Art and I'm so loving it!!! And you Lisa!!! I l,ove you and you are so so so my best friend!!! Yay!
Bent.

So fun to see the Cthulhu masks. I've been itching to get back into Lovecraft, I even bought the Young Lovecraft graphic novel:

last week at the comic shop because it looked like the kind of gothic entertainment that I needed to help ease me into the season. Your description of slipping on Halloween like an old sweater is such an apt one. That is exactly how comforting and comfortable it feels. I was actually thumbing through last year's Martha Stewart Halloween magazine (yes, I'm a fan of the woman, I'm not ashamed!!!), getting inspiration for October plans.

I'd be terrified to see a sculpture of the bug that has taken such a toll on you this summer. It would be terrifying!

It doesn't surprise me that Ebay is trying to squeeze out more money wherever they can. Why should they be any different than any other company? Ugh, it just makes me frustrated. I need to go spend time with poppets, they tend to make more sense.