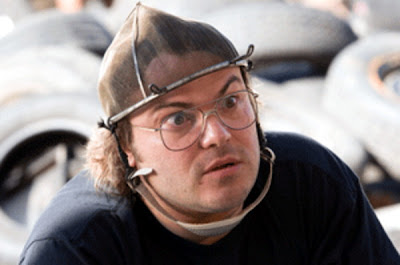 If you like the work of Michel Gondry, you'll probably like Be Kind Rewind.
If you love the work of Michel Gondry, you'll likely love Be Kind Rewind.
I've read both positive and negative reviews of the movie---mostly the negatives were that this one lacks the darker edge of most of Gondry's work.
The people in this house generally love Gondry (including Orion, who loves his music videos.)
None of the previews I've seen for this movie provide the slightest clue as to what it's really like or even about. That makes me think the people who are unfamiliar with Gondry's work but would really appreciate it might miss this one. That would be too bad.
On leaving the theater, Pete described it best by saying, "Wow, a movie made by someone who actually loves movies." ditto
I'm hoping our own Carl A. will see Be Kind Rewind and review it on his Stainless Steel Droppings. (see links list, stage right)
It's not playing widely. We caught it here at the Cinemas Palme D'Or in Palm Desert, where the seats are a bit old and not so comfy as newer theaters. Nevertheless, without Palme D'Or, this desert would be a black hole for film and we'd be driving to Ontario. They consistently show films we can't find anywhere else in town. Thank you Palme D'Or!
*****
Today it was very warm. We'll be swimming again soon. The studio is very busy but with new and improved scheduling, I'm spending more time on projects and larger works. I should have some new things to show in the quite near.
****
I got a postcard in the mail today. I have jury duty. On April Fools Day. Already my inner dialogue is sharpening its sticks.
****
Angie tends to leave a light on for Poppets, who now all live in 'the cave' until time for shipping. Tonight I actually hesitated before turning them off. What do all those little guys do there in the dark?
****
g'night
Posted by lisa at 9:57 PM

I've seen various reviews, but hadn't realised Be Kind Rewind was one of Gondry's... I loved Eternal Sunshine, so maybe I should see it. (Would one be seriously disadvantaged by not having seen all the films that are referenced?)

My husband "rescued" my Poppets from a jar I had (temporarily!) put them in, on the grounds that "They don't like it. They can't get out."

Sorry about the jury duty. I had it once for over a month - it was a bit of a pain, but in a way I was glad I'd had the experience. I wasn't prepared for the sheer indifference of certain other jury members, but overall... it was very interesting.

I have desperately wanted to see this. Firstly, I am an unapologetic Jack Black fan. I'm sorry, but it is true. But, the reason I have wanted to see it is because of an NPR review talking about it being a Gondry film. The reviewer's description of the film had me sold. I hope to get out to it before it leaves KC. If work and relative's poor health, etc. would just get out of my way!!! :)

k: I think you'll miss some subtle layer here and there if you don't know the films. You've likely seen 2001. Others are Ghostbusters, Rush Hour, Driving Miss Daisy and RoboCop.
That aside, I think you can still truly enjoy this movie.

If you haven't seen the movies, you might want to after seeing BKR.

Carl: I sure hope you get to see it. Not to worry, I think it will still be good on DVD.

No! I have not seen a single one of those films, except for a bit of the end of RoboCop. I think the trouble is that I wasn't old enough for these at the point that these were in the cinemas, and by the time the generation who were the right age were grown up and making films... too busy.

This is becoming a habit. I didn't see ET until I was well into my teens because I had a childhood terror of the little beastie. Nobody'd told me he was meant to be friendly. And I didn't see any Star Wars until I was 18... no special reason. Too young the first time.

And yet, and yet, I have seen a fair few films in my time... Just not these ones.

K: I think you'll have a great experience anyway. Go for it.

Janet and I saw Be Kind Rewind this past week; it's definitely more light-hearted than his other films, and it wasn't as interesting after JB pissed his magnetism away, but I think I laughed harder than for any recent movie, mostly at the Sweding efforts. Ghostbusters is one of my favorite movies of all time, and the way they approached remaking it left me gasping for breath. I'd certainly watch it again, which I can't say for all of Gondry's previous films.