In Praise of Ordinary Days - Nearly 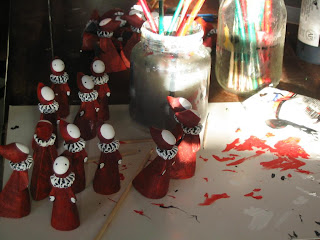 Our house has begun to take that smudged look particular to houses with home offices, studios , various humans and their stuff.
Things get mixed up and sort of homogeneous.
In other words, no one can find anything and I begin to suspect that with a spark of electricity, the carpet in the den could generate life. These are sure signs it's time to stop working, tidy up, then take a few days off.

I decided to get a start on it Sunday evening, putting things away in our bedroom closet. (The coat closet is full of comic books.---there are never enough shelves.) Orion, getting over a spring cold, was playing quietly on the bed. I saw just a flicker of movement in the closet's far corner. Not Gurtie. I'd just seen Gurtie outside. I put down the basket I held and walked over, pushed aside a shoebox and was surprised to discover a very young rabbit, still and all tucked in as though, well, hiding. 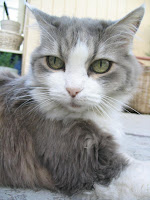 I scooped the little fellow up and thought about it for a moment. He began to wriggle wildly.

What I wondered was whether to show the rabbit to Orion. I decided not to. He'd been ill and I wanted him to rest. But it wasn't just that. It was because, when I discovered the rabbit there in the corner, it was sort of creepy. I mean, why? Can you think of anything less threatening than a rabbit? Maybe it was the way it was just there, looking at first like lost sock.

So I put him outside in the front yard, where the grass was extremely soft, where nearby there were other yards with other rabbits--one of them likely his mother-- and where he was relatively safe from Death, watching birds in the back garden, unaware, at the moment, of rabbits. He scampered off into the hedges.

I came back inside and washed my hands, wondering again why the encounter was disquieting.

I checked around the mouldings, hoping to find out how the rabbit got in still wondering why I felt creeped-out. Then, just like that, I discovered another rabbit, still as the first, hunched and flattened to fit the space it had wriggled into between box and wall.

This is where things could get interesting. 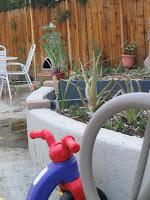 But they didn't.
I checked and tidied the closet, and that was the end of rabbits. Except for the unaccountable creepiness.

Thing is, I love that moment of the unexpected, the small oddness in the ordinary. Many good stories start out that way. Possibly my awareness was already primed. Ben picked up a book collection from an estate recently and I've been tearing through books by Clifford Simak and John Wyndham.

"When a day that you happen to know is Wednesday starts off sounding like Sunday, there is something seriously wrong somewhere."

So begins John Wyndham's "Day of the Trifids."

Works like these, where strange things happen to quite ordinary people set in ordinary surroundings, are often labeled 'cozy catastrophes.' I'm very glad I've never let that label put me off. I'd have missed some fine reading over the years, including some H.G. Wells and Ray Bradbury. Like any other sub-genre, there's quality work to be found. 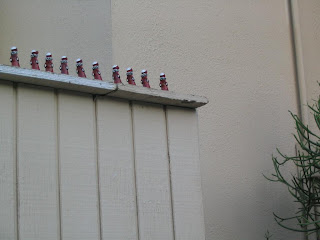 Later that night, when I was settling in for sleep (with another book, of course) I applied the very real sensation of finding the rabbits to other discoveries., purly imagined, for fun.

What if the rabbits had been subtly wrong somehow? What if when I turn off my reading light, and my eyes adjust to the darkness, I notice something pale and child-like, crouching in the darkness just outside my window?

Really, what would I do next? What would you do?

Creepy is a good ride. I read a lot, and don't mind stepping into an alien environment right off the first page, but I especially enjoy a story that approaches quietly, empties my pockets of the trinkets of truth I hold on to and shoves me square into the unknown.

Likely, I should've shown Orion the rabbits. Generally, if there's no danger, I'll choose to share the experience. Still, something definitely caused me to hesitate. Maybe something subtle.

Maybe it will come to me later.

Maybe I'll wish it hadn't.
At any rate, soon we'll be conducting a thorough search for small openings.
Posted by lisa at 10:53 PM

What a wonderful experience! We all know how to react to finding a mouse or a rat, but yeah, how about a rabbit? How did it get there? Why a baby? What do you have to do to similarly attract, oh, I don't know, baby dinosaurs? Or, everybody's favorite, pots of gold?

Unaccountably creepy. We don't see a lot of rabbits around here, but we do have deer. I hope I don't find any foals hiding in the back of my closet.

One of my childhood memories is being shown a small mole that had got behind a neighbour's washing machine. It was alive and unharmed. We caught it in a cereal box and released it.

(I have no idea whether there are moles in America, but we're talking the kind from The Wind in the Willows.)

Hello Alys! Where were you?

"...Bunnies aren't just cute like everybody supposes
They got them hoppy legs and twitchy little noses
And what's with all the carrots?
What do they need such good eyesight for anyway?
Bunnies, bunnies
It must be bunnies..."
--from "I've Got a Theory", from the musical episode of Buffy The Vampire Slayer

im just saying, Joss Whedon may have been on to something...

or else the poppets summoned them.