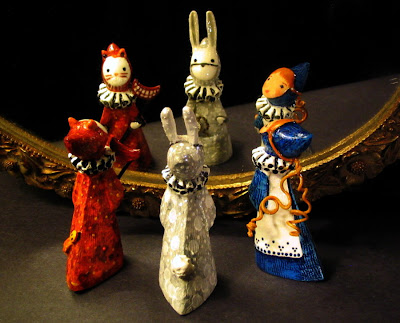 One thing I'm sure of, as Poppets are concerned, is that Poppets like to play.

So I've made some dressed in theater costumes of favorite characters, beginning with some from the works of Lewis Carroll.

I'll want a whole set of these, eventually. I'm guessing a few others will too, so even though they'll all be hand-made and different, I'll be making a number of each character, so that those who want to will be able to, over time, collect all nine.

The costumes have obvious zippers or buttons or masks, and some Poppets have a bit of red peeking from underneath.

Making Poppet costumes is a lot like making toys. As I often say, when things get weird, I can still make toys.
Things got weird.

I'll be talking about things getting weird this weekend on the "Inner Workings" part of the forums. Hope you'll stop by and talk back.

Ben will be back tomorrow, and we'll re-open the studio, which is likely full of cobwebs and dust and creatures made of cobwebs, dust and neglect. We'll deal with those first, then get back to work.
Back to work is a good idea.

Orion and I are feeling better. Thanks everyone. We'll likely be swimming again soon. I'm looking forward to underwater.
Underwater is good.

Speaking of swimming...wetsuits...hmmm. Likely I should have a salad for dinner. But I'm not. I'm going to have chicken.
Chicken is good too.

I would just like to add that this has totally made my day.

Those are incredible! I'm in love.

Oh LISA! You wicked person! I have an Alice obsession (Tenniel illustrations, please!) going back to when I was seven.

What happens to Poppets when they pass through a mirror, I ask myself?

Very Cool Lisa... I see they are a Hit! Out of the ballpark and through the looking glass, as it were.

Hmmm, my spider sense is tingling... something tells me a set will find its way to ATL, **chuckle**

Ha-ha. Those are awesome!

The Alice in Wonderland story, and its story structure, is among my favorites. These poppets are fantastic interpretations. Very, very smile-inducing!