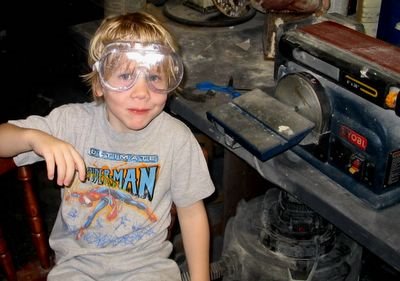 It’s Ben’s turn for a bit of burnout. He’s taking a couple of days off. While he’s gone, I decided to spend a few hours helping him clean up some of his castings. He’s making a kinetic wedding sculpture for his cousin. I’ll post photos when it’s painted. The bride and groom are a fairy and knight, respectively, of course. I’m thinking that when he gets back tomorrow, it might be a nice surprise that I spent time working on his art for a change. I’ll let you know how it goes over. He (like me) SO needed to take a ‘time out.’ SHEESH (I begin to appreciate how it must be to work with me every day.)

Orion announces he wants to ‘hang out’ in the studio with me. I explain that goggles are required anytime Mommy uses power tools. He doesn’t mind so much that he walks around in them long after I’m done.
It occurs to me that I started this blog when he was two and that Neil blogged about him when he was born. So technically, his life has been blogged from the beginning. I assume he belongs to a generation of such children.


The new SlaughterHouse Galleries is a space for the original art to stand on its own. There are two ‘rooms’ up now, mostly with food and puppet pieces. Later we will add the Bronzes, the Paper Dolls and the Kinetics. The Gallery site won't replace the current studio site, which will focus on ‘behind the scenes’ studio and project work.

Here is a first look at the new gallery AND a preview of the new chapbook with the venerable Gene Wolfe:SLAUGHTERHOUSE GALLERIES
Posted by lisa at 12:57 PM

Is fools rush in made of little jester legs?
he he he.

The gallery looks great so far and I'm looking forward to watching it grow! Well done!

Mostly with food and puppets - how could I not look? Yum!

The detail windows don't resize quite right on my 800x600 antiquated monitor though. (I can only just get at the next/last arrows at the bottom.)

Beautiful website Lisa and Ravyn - clean, simple and elegant, nicely done and showcases the work well (which is quite wonderful too!)

Alys - You should be able to drag a corner of the window and resize it (though the contents of the window won't resize). Also there are scroll bars to get around in those windows. If you're not able to do either of those things, post here or email me (nora at ravyn dot com).

ivenotime - thanks! We worked on the beginnings of that design when i went out to visit Lisa in January.

The new gallery site is great looking. I like the old site, but this one really does seem like it's more focused. And the color scheme is great. Muted and focusing on the art...

It's like an art gallery I can look at in my underwear from home.


Everyone else, those who didn't say something mildly disturbing that will never go away, thanks!