What the hell is up, Doc?


So I had this dream. Excruciatingly detailed--I can recall the pattern of the rug--as most of my dreams are, but that's not the point so I won't go into it. Well, except that there was a Maloof chair---very organic and beautiful. Anway, I'm working in this place strange to me but home to my dream self, and there's a knock on the door. I open it and in saunters Bugs Bunny, bearing flowers. Naturally I'm surprised to see Mr. Bunny but before I can say anything he embraces me and pulls me into a kiss. I'm not talking a cartoon kiss either. I'm talking a deep human kiss that goes on forever and has all the sensations that go with.
Right. I know. The rabbit teeth. But dreams eclipse those sorts of impossibilities and human beings happily overlook them, e.g., Everything On Cable. His teeth are pretty big too. Besides, if I've accepted that Bugs just walked through my door, may as well go all out, down to the wabbity smell of his fur.

He leaves as suddenly as he appeared and I'm left stunned and breathless, in a turmoil of conflicted emotion.
I love Bugs? I...love...Bugs.

My alarm went off then and I woke a bit confused, amused and even embarrassed to find Soosi inches from my face, looking as though she saw the whole thing.
Easily enough explained---Orion found an old "Best of Mel Blanc"collection and watches bits of it at breakfast and snacks---but still fairly twisted, even for me.
I decided right then to keep it to myself.

****
I've been working on new art for MadCon. Yesterday morning Aubrey pointed out that I was talking to myself (more than normally) as I worked. I'm building a piece that's a sort of wunderkammer and apparently I'd been talking rather animatedly to its inhabitants.
Really? Hmm. sorry about that.
"No," she said, "It's cool to see you really into working." She looked around the room. "I like your new stuff."

"Yeah," I said. I was putting the finishing touches on a little fellow with six cuff links and feeling pretty satisfied with myself. "I love bugs." 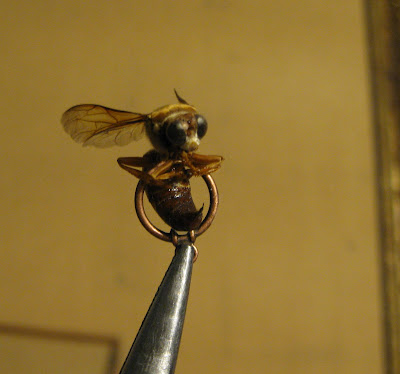 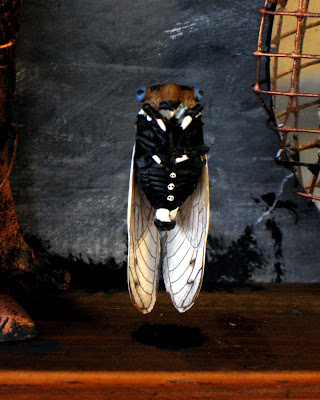 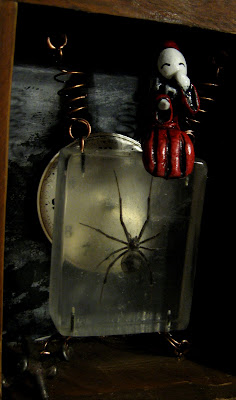 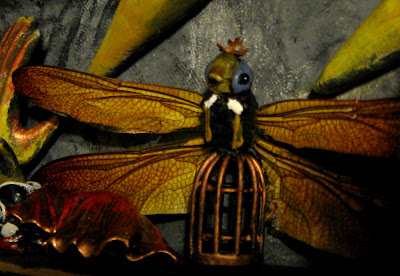 The bugs were given to me. Thanks guys! I killed the black widow.
Posted by lisa at 9:24 AM

It is as if our lives read like books, sometimes :)

Nya-nya na na nya! Lisa has the hots for Bugs Bunny!
LOL, love ya hon...
And the new pieces ARE sweet!

Thanks for sharing and not keeping it to yourself. Every time my unconscious dreams me a neon sign of the obvious, I wonder that I was so distracted as to overlook it. And yet, life sometimes gets in the way of our living it. Silly humans, indeed.

Sorry I have to write this: Soosi is a very creative cat :D

My dreams typically involve being killed or nearly killed or killing someone before they kill me or a family member. I remember one in particular where I am running in these large versions of Chuck E. Cheese tubes and there is a little curl in a red dress with a large gun running after me...I can't remember who killed who though. lol.

Love the art. Particularly the first bee pic. There's something unusually...elegant (?) about bees when they are visible and aren't in motion.

Kelly: I agree, including typos.

Benton Warren: Thanks! and, you know, before the censors appeared, Bugs was somewhere between cad and criminal.

Milissa P: The more I learn, the more willing I am to humiliate myself. Not even going to try to figure out why. Not yet, anyway.

jwb: tell me you meant 'curl' and not 'girl' and you'll make my day.
hey---what about a poppet vid with the classic "The Good, The Bad and The Ugly" theme. It's been done before but then, so has everything else.

The Old Maid: You're likely right, though I begin to suspect she doesn't believe she's a cat, or at least that we are.

wowowow Yes I meant girl. lol. Typing at 500 miles an hour has it's drawbacks. I actually re-read that before I even typed the little code thing in. -sigh- lol.

*shiver* that black widow gets to me!

Ahhh....bunny love! Hey, at least it wasn't Yosemite Sam. Bugs is cool, after all.