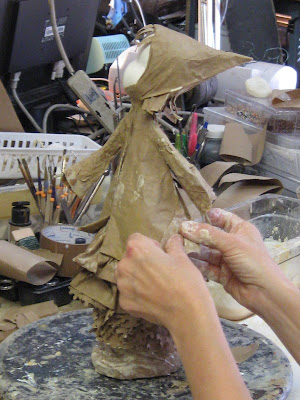 A number of years ago, when Neil was working on Coraline, he'd send me bits of it to read. It was, of course, intriguing in every sense. He asked me to phone him every few days and nag him to finish the story. I did just that. I'd call and he'd answer and I'd say things like "Did you work on Coraline today?" or "How much did you work on Coraline today?" or "What exactly did you do today?"
One day, he said "Please stop nagging me about Coraline. I'm beginning to dread your phone calls."
So I stopped nagging him and he eventually finished the book without any nagging. Or, at least without mine, which made me happy because I don't like nagging and because Coraline is an excellent book. 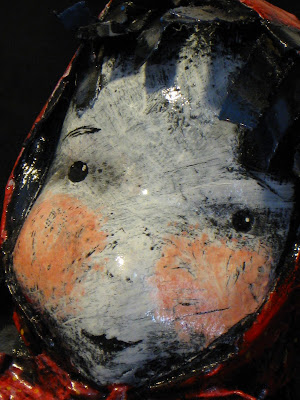 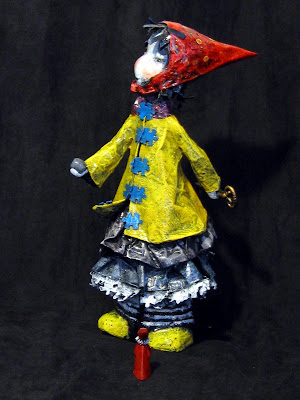 I love her. It's wonderful how you can make something that's clearly Coraline, but different from anything in the book or movie.

why do you continue to torment your current "legal husband"? what do you see in
Spencer Andersen?

You have lost so much, Lisa... and you are harming Orion's mental state with your lifestyle...

I see the psychos are out tonight.

Coraline is beautiful. She is how I pictured her when I first listened to the audiobook, but different that I envisioned when reading the book, and again when seeing the film. Life is funny like that.

Stacey: yup. they're out. is there a full moon? Glad you like Coraline too

anonymous: stalking is a crime

rayvn: thanks for the call, really, really. As usual, you've got my back.

I'm not going to delete the posts. They're history.

Anonymous said...
This comment has been removed by a blog administrator.
4:10 AM

Anonymous said...
This comment has been removed by a blog administrator.
4:32 AM

I've never wanted to moderate comments. It always seemed a bit like cheating to me.

I've always written frankly here, sharing some of my deepest feelings about life and art, always struggling to maintain a balance between honesty and appropriate content.

Now it seems my personal battle is spilling over into this blog space. It's funny...I consider this place sacred in a sense. Yet my mind keeps picturing the scene from Mel Brooks 'Blazing Saddles' where the frontier battle bursts into the studio cafeteria.

Lives are messy, sometimes chaotic. And my approach--that struggle for balance-- was to share these events after time has given me some perspective and I could figure out what wisdom had been gleaned from them. And honestly, to maintain some sort of grace.

But. Alas. Here we are. What would Poppet do?

i think Poppet would observe. Steampunk Doctor Poppet may be inclined to dissect, or at least shine a bright light on the subject.

Trolls meander into blogs all the time. There is no need to feed them, they will either whither and die, or continue to bleat their sad stories to deaf or indifferent ears.

Poppet will observe scientifically, and then move on to the next subject. Some of us will learn.

and in the meantime, the rest of us will ignore the trolls, support you in any way you need, and send good thoughts your way; making sure you know we care and "got your back" if necessary ;o)

Poppet would also be very shrewd, and do a screen capture of all the stalkerish comments, so there's a record, before deleting them.

Shaming is a very strange and puritanical way of trying to manipulate others. I lived that way for most of my childhood and into my 20s. It's painful and unjust. (And in my head, yoda is now pontificating: "fear leads to anger, anger leads to hate, hate leads to suffering..." *cue spooky music*) The shamer is often speaking out of fear disguised as righteous indignation...

But I am certainly "preaching" to the choir.

I carried a lot of anger from my many years in a fear and shame based religion, some days, I still do. Funny thing is, I met these Poppets... this became symbolic for me of taking a tiny step out of the fray, yet still keeping my mind engaged with the problem at hand (my parents are still involved with said religion, and project those fear-based memes my way often.) One of my loudest internal voices seemed to be like an 8 year old stomping around heaving great gusty sighs of "it's not fair! It's not FAIR!!!" She's right, it's not fair, but the dramatics were not helping her. (Maybe some others desperately need some dramatics, we're all different.)

Cyberstalking is definitely criminal, and fortunately the law agrees.

Wow...what IS going on at the moment? I swear it's happening around me too and it's random and a bit off the charts. Seems like a good time to make I know where my shoes are and make sure my feet are in them...then proceed with great care in the company of good friends and, as Ravyn said, do NOT feed the trouble...
Blessings.

Poppet might point out that by Nomenclature alone Anonymous means "coward" and that perhaps Nonny Mice should stage a counter demonstration protesting the defamation of their identities.

Nonny Mice might wonder if Anonymous has button eyes.

If that person values privacy so much, they could make a better case for their own, without violating Lisa and Orion's, I am happy to see that the attempt to play on Lisa's belief in free speech and transparency failed to become a tool to control her. Keeping some but not suffering through all is appropriate, it does not deny, but also does not continue to enable.

Whether it was a howl of pain or a malicious attempt to alienate the artist from her audience, it was still an attempt to control and therefore abusive - also undermining any moral arguments being claimed under the cover of Nonny Mice.


The Poppet Pretending to be Coraline (as well as the Coraline Doll- love that!) is a wonderful piece, I love the rain slicker and the very subtle hint of her Poppet Robes. No amount of anonymice can undo that, and Nonny Mice are most certainly on Coraline's side.

Trolls and stalkers...feh. Ignoring them is good for public discourse, as long as you keep proof of their ill-bred behavior and forward to law enforcement as needed.

Sending you and the ones you love the keeping-safeness...

Poppet Coraline is so beautiful m'Lady. She seems so strong and so kind, as Coraline should always be.

As for what happened here, I feel very sad. When I first came to your blog, it was really fantastic to me. I have a very different point of view of life and it's daily manifestations, different from my friends, my colleagues and my family. But I get along, for many reasons and mainly, because I believe in harmony, in balance and in fighting for beauty, equity and autonomy. But I digress.

This blog of yours saved me many times from my own disturbed mind. Reminded me of the presence of beauty, of inspiration, of fighting the Good Fight. It helped me so much. Poppet came into my life in such an important and needful moment. And I just began to learn.

I know we all have scars on our souls, and Real Life have this way of spilling into things we treasure as havens. It always does.

I think what I'm trying to say and having much trouble saying, is that I'm here hoping and sending concentrated peace and well-being. I know I'm very, very far away, and don't really know you and your loved ones, but you have my best wishes, regards and hopes anyway.

Well as usual I talked a lot and said little, so I'll make Syd's words mine and send you and the ones you love the keeping-safeness.

And oh, Professor Green and Little Gray are know sequencing a powerful anti-troll virus! We're hoping the new mutations will be quite deadly for those meanest meanies.

Everyone - Poppets stick together. And so will we.

I was actually going to have breakfast before posting, but the WV is:
monocks

Here's another good word, in regard to stalking: ex parte

I'm thinking it might be to bring a discussion to the forums "Inner workings."

but as yesterday was spent employing ex parte and other latin-named tools, today will be spent making art.

I think covering this on the forums is more appropriate---it was created for deeper discussions.

Also, a day of creating art sounds like just what I need. I'll get some coffee and get to it.

Thank you to everyone---you continue to blow me away with your insights and support.

Coraline is beautiful. Each time I look at the pictures I spot something new.

Professor Green and Stempunk Doctor have arrived safely and are getting to know the other poppets here.

Troll - all I can say is to echo what others have already said - coawrdly, anonymous comments deserve nothing but a record for evidential purposes and then to be ignored.

You make beautiful things which make many people's lives more fun, and more beautiful, and the blog here is an exciting and interesting place to be. I hope that you won't be put off continuing.

Warm, good thoughts to you and yours.

Syd: I was thinking that having the button eyes was appropriate, because that was something that frightened Coraline horribly and we do tend to visualize those things that scare us.

to all: Anytime I start to feel down, as humans do, and to think of myself as someone who spends her life making tiny objects, I'm reminded that Poppets are so much more than the physical object. These tiny creatures have a deep personal history for me (see Strange Attraction) and secondly, they are truly 'bigger inside than out'. The Poppet-who-lives-on-my-desk is always part of my blogging. Poppet Vision is a way of viewing life without prejudice. Being able to step into that view has often turned me from fear or panic and toward reason and grace and fairness. To accept myself and others, failures and mistakes and moments of brilliance, as a whole. So, to Ed o'mamute---congratulations on your own poppet vision. and thanks for being a member of this odd family we've become.

syd and ed both expressed what i was thinking, better than i think i could. so i'm chickening out and saying "yeah! what they said!"