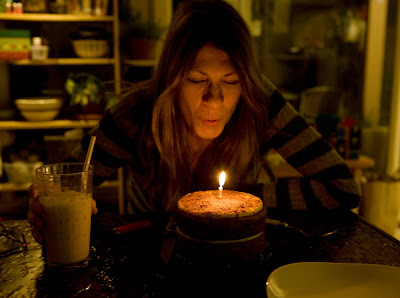 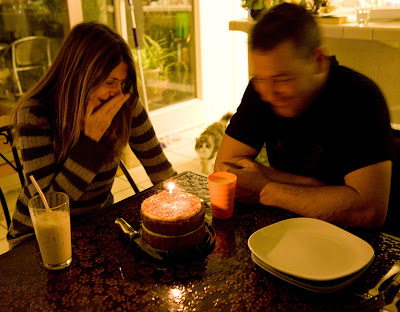 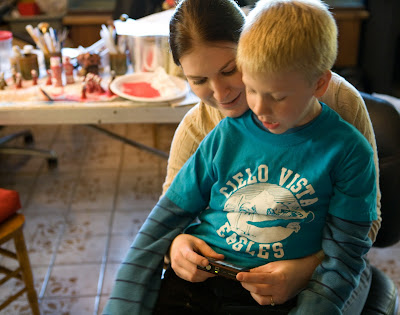 I'm thinking...for all the birthdays from here on,
I might like to give presents
to other people.

I'm thinking...I have a lot of decisions to make.

I'm thinking...it would be wise to take a bit of time off before I
start making them. 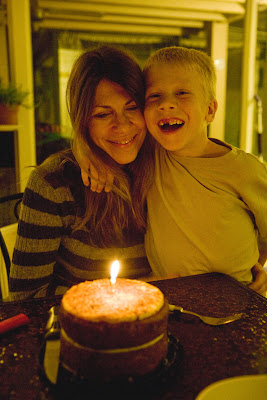 Birthdays can lead to thinking. Enough with the thinking. 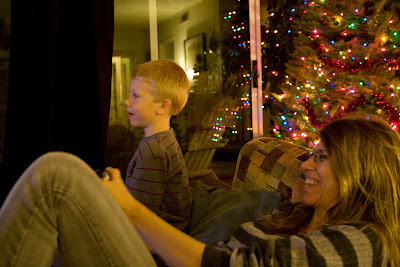 She likes the cake.

The puzzle table is a collaboration with Spencer, who appears here to have just phased in from another dimension. It's not as big a jump as one might think.

I have photos of the making of the table. I'd like to get them onto the forums.
It's on the list. I'll do my best, but you may have to nag me a little.

Alison and Orion hung out at Strange Too after our meeting.

Orion was very brave at the dentist's office.

The dentist's office is a difficult place to be brave.

We rounded things out with some Mario.

Mimi Ko took these photos. She helped with the tree, made apple crumble and translated directions for the new version of Rez, from Ben, Samantha and Joyce.

Aubrey made a pound cake, which tastes even better today than yesterday. Pound cakes tend to be like that. They improve if allowed to sit for a few days. But, that never happens.

Thanks for all the good wishes, calls and emails.

Wow look at Orion he's getting so big!

ravyn: inside and out. he surprises me to no end with things he says

the best word verification I've had so far: squitypip

Blali was my word verification. And squitypip made me think instantly in some amphibian/fishy little creature.

Oh my, I'm playing too much spore.

Ed, o Mamute:Squitypips were of no concern to Brate. The enimb needed bigger fish. Already the waters were hardening. It would be a long winter if the storage vaults remained half filled.
Brate signaled to his mate, checked his lights and dove into the black, tossing the foul-tasting squitypips in the wake of his propeller.

two wv's Brate and enimb.
tag. you're it.

Agitated, the squitypips flashed a violent maroon. Brate slowed his descent, hoping that their light would attract stracin in sufficient numbers to fill his tanks. He hovered in the dark waters among the flashing squitypips, feeling both stothstic and anxious; all the enimb of his tribe were growing increasingly hungry.

If the stracin come, Brate thought, maybe this will be enough to help the enimb to fight the violent punme that is afflicting them. He doesn't know when it began, or exactly who is the one to blame, but he doesn't really care. He knows he must help his tribe. He pulls the propeller to a halt, make a signal to his mate that he should ascend a little and wait in a safe place, turn off all of his lights, and starts to concentrate. If the stracin is to come, he must wait in deep darkness, or all this effort will be for naught. No sense being stothstic at so late an hour. He draws one big breath, still himself completely, and begin to watch the utter darkness of Blali's swamp-abyss.


Mine this time was punme.

A very happy, though belated, birthday to you! Birthdays are indeed a strange animal, especially as one gets older. While I often feel that the age doesn't mean anything it still marks the passage of a finite time, at least in this life, and as such can be quite sobering at times. But also very joyful. As they jokingly say, turning older is better than the alternative. I for one enjoy spending part of my passage of time with you and certainly wish you all the very best. I hope you and your family and friends have an amazing Christmas and New Years holiday.

A shadow cut fast through the gloom and faded into the black before Brate could lock on. Something big. Instinctively he checked his display. His mate's blue locator blinked steadily. It wasn't her.

Brate steadies himself, inhale deeply, and let the fear wash over and through himself. He regain his senses, and keep himself from swimming after the big thing. He has a responsibility with his mate and his tribe. As soon as he is calm again, the stracin come. Huge numbers of them. He signals to his mate and they quickly began to gather.. With the large quantities, they are able to fill all of their tanks. His mate is very happy, and she squeezes his arm lovingly. But Brate knows deep inside, that this won't be enough to cure the wicked punme. He also thinks that the key to solving this affliction may be down there. Together, they began to ascend back to the surface, and them back to beloved Ziya and to the Freddome. This will help a lot, but not far from now, he knows he'll came back here alone, and seek out the swamp-abyss for a cure, or for his own demise. When they surface, he pulls his mate closer, and hug her strongly.


(that was a little cheesy, I know, I couldn't help. Wv: freddome)

that was fun. I think we pretty much wrapped that one up, but I'd like to try another. possibly I should start a new post or we should open a new forum for stories.

what do you think?

Well, I think that would be amazing!