Get up and do it again, Amen. 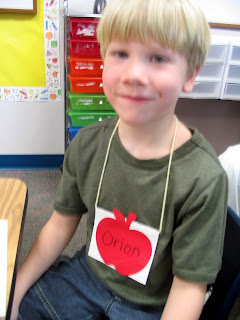 It's about 95 F outside tonight, which is actually an improvement. We're in day six of this heat wave. Rolling blackouts, flash flood warnings and the ever present oppressive heat. There's no escaping it. Work and school dictate we stay right here.

The rubber around the sliding glass doors has begun to sag and melt.

Otherwise, a normal sort of day. People going about their business. For us, it was dropping Aubrey off for her first day, then attempting to sit on impossibly tiny chairs for kindergarten orientation.

Pete says possibly having parents sit on those chairs is an intimidation technique developed by teachers. He didn't attempt to sit. Not because of spurious psychological ploys of kindergarten teachers so much as an understanding of the laws of physics.

Theories aside, I do love the smell of crayons in the morning. 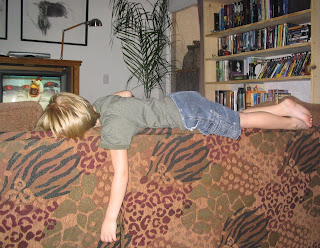 The routine will take some getting used to.

Later I found myself floating in the pool for awhile, staring up at the unblinking white sky above, accepting that it's too hot, literally, to do much else.


I did finish a few new pieces to put up at a kinder hour tomorrow. I'll get several more Purple Poppets up as well. After that, the gallery will be pretty quiet until October. Here's a peek at Blue Oberon and Titania. 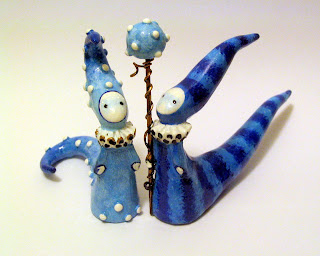 I had chocolate milk for dinner. And now, I think my day is done.

Tomorrow, we get up and do it all again.

Between the comings and goings, the steps of everyday we teach and learn.
All we Pretenders.

I feel like one of those old, silly aunts who always repeats the same stories, because every time you talk about the heat I feel compelled to say that I don't know how you do it. Has to take a great deal of fortitude. I just couldn't take it.

Orion looks tall sitting in that chair...is he tall for his age? Maybe its just the fact that time races by.

Love Titania and Oberon and am looking forward to what October unleashes.

Gods above and below!!! I love your blue Titania and Oberon. These twisty poppets are great. Simply Fabulous. I wish I could afford both of them and then they could be the blue king and queen for my (far in the future) red vs blue poppet chess set.

Well done Orion!!! We are all rooting for you.

Carl v. ... I like your description... 'what October unleashes'

scrambled letters for today: elyfe... a fitting description for the electronic lyfe that we lead via blogs etc.

Hasn't the heat been horrible?! I'm in a different part of the south...here it's the humidity that gets the best of us. I can't wait for the Fall...October weather...my favorite.

Seeing Orion makes me want to go right back to Kindergarten. Like you, I too love the smell of crayons in the morning ;) Kindergarten was fun...I don't envy some of the other schooling though.

I'm in love with the new Oberon and Titania! They're beautiful. You never cease to amaze me with your creations.

My father, the child psychologist, says that about those chairs too.

I love Titania and Oberon.