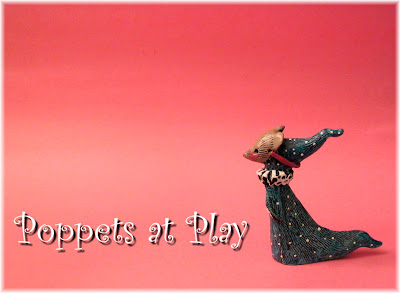 On Dreary Days, We Play.

Yes, indeed. Weeks of dreary days that seemed to go on and on, even into our sleeping hours, into our dreams.
So, what to do but to play?

Ravyn, Bent and Robert are all working on brilliant new pieces for next time.

For now, I'll open the gallery with the Poppets that came from, well, dreary days of play. I considered what Poppets might do on any particularly dreary day, and discovered that they like putting on costumes and masks and creating their own elsewheres.

Some of them explored the world Lewis Carroll created for Alice. I enjoyed a renewed appreciation of that world while I researched for the sculptures. And, of course, found many side roads I'd like to visit with Poppets, like famous 'fools' and Punch and Judy.
At any rate, play was what was called for, play we did, and all was for good.
Some of our Rat friends joined us. It's been quite a long time since I made rats. I realized too, painting these, how much I've missed them. Poppets and Rats seem to get along splendidly. 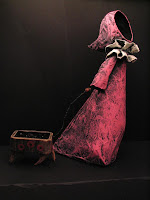 The auctions are HERE.

10% of Wonderland-inspired Poppet sales is for NORML
10% of other Poppet sales is for NCAC
10% of Little Red Poppets is for CBLDF
10% of Rats is for CBLDF
A number of people are asking me about the Neil Gaiman Rat. I plan to have at least one on each upcoming auction of the limited edition one. I'll also have one each of the other author rats; Edgar Allen Poe, H. P. Lovecraft and Harlan Ellison.
The new Neil Rat will be an open edition and will be out later this year. If you want to be on the mailing list for that, please email to
ravyn@poppetplanet.com
If you have any questions, ask me. I really like hearing from you. I hope you enjoy seeing the new work.
Already, I'm back in the studio.

The new Poppets look great. I especially like the Alice White Rabbit one.

I love the lil' masks. My poppets want one (do they share well?).

Thanks guys! Glad you like them. I do too.

Mary--generally they do, but I'd keep an eye out.

There should be some sort of Poppet dressing up chest - a Poppet sized place in which they can store their masks.

And then I remember that you actually already did that...

I am utterly in love with the poppet masks. I hope you have the time/energy/inspiration to make them again in the future--I'm not sure I'll be able to scrape up the cash for any of the current round but I would LOVE to be to provide my poppet pair with greater scope for their play!

You know, I wondered if, when I showed the masks, readers would think I'd finally gone into one of those hidden rooms in my head to live forever.
It really is escapism in a way, to make tiny things for poppets and then play with them. But then, it made me feel better. How could that be a bad thing? Then I gave it some thought. Later I gave it some more thought, and I remembered how important it is to play.
We all know how important it is for kids. It's easy to forget that adults need that too.
At least, our brains do.

So, not to worry. I already have a whole bunch of new ideas for masks, accessories and playsets.

I'd like to make some tiny theater sets too.

And...oh, will Halloween ever be fun for Poppets this year!

Thanks everyone for your extremely encouraging comments.
It's really comforting to know there are lots of nice people out there who are just as insane as me.

Robert---you totally cracked me up.
Totally.

My daughter loves to dress up everything. Her dolls, her Polly Pockets, her Littlest Petshops, even tiny toys not intended for dressing up. Come out with a Poppet Playset and she's yours forever.