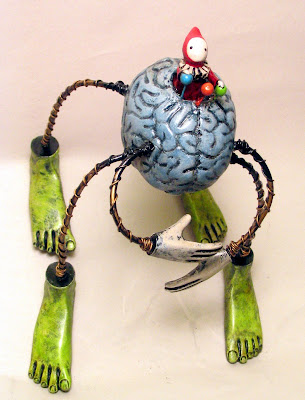 Mostly what seems to be working during this last month of summer is dividing up the days into parts. Painting carousel, rats and other pieces that have been waiting in the studio for ages is a good thing. Now they won't be staring reproachfully at me from the shelves, and I get to re-discover details even I'd forgotten. I put some of them on ebay to look for new homes. Several people have emailed to tell me how glad they are to see Rats again. I tell them I agree.
The other parts consist of working on new pieces for Halloween, which is very much like playing, in my view. You see me working away at my bench. In my head I'm four, running full tilt through a field of daisies.
Evenings are for the Fortune Teller, who is technically done, except for sealing the glass front. Every day Orion and I get our fortunes told. Sometimes it's funny. Sometimes it's downright creepy. Sometimes we run away.
And then there's time spent in water, for the mental reset. I've had my own demons to deal with this summer, artistic and otherwise. I make notes of lots of it. If I can't make notes, I make toys, dammit. Eventually, I'll put the notes into some sort of presentable form. One day, I'll decipher the language of the toys, which seem to contain stories like, When to Let the Poppet Drive and Lost on the Road to Crazy. 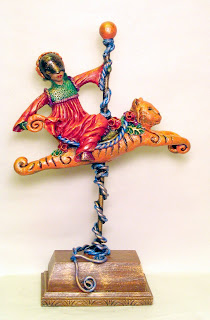 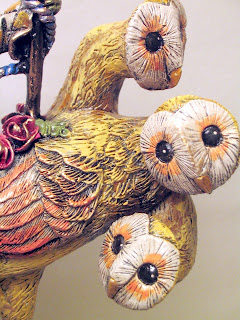 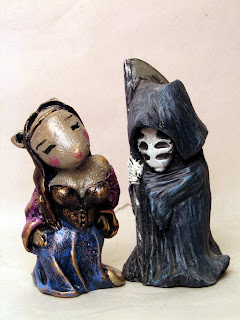 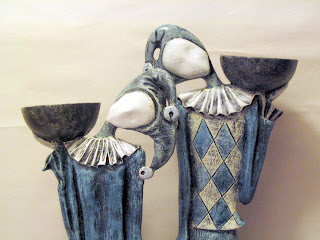 A few words on words:
A customer recently thanked me for the 'lagniappe', which was an entirely new term for me:
I appreciate the new word.
Lagniappe derives from New World Spanish la ñapa, "the gift," and ultimately from Quechua yapay, "to give more." The word came into the rich Creole dialect mixture of New Orleans and there acquired a French spelling. It is still used in the Gulf states, especially southern Louisiana, to denote a little bonus that a friendly shopkeeper might add to a purchase. By extension, it may mean "an extra or unexpected gift or benefit."
I enjoyed this list from Mental Multivitamins of One Hundred Words A High School Student (and parent) should know.
And, some photography coolness:
Mimi Ko was featured on Hey Hot Shot this week. I'm extremely pleased to see her work acknowledged there.
If you're a photographer, Poppet-wise or other, you'll find the site interesting.
Night time is for much- needed rest, John Stewart, Stephen Colbert and something cold and chocolate.
I'm currently reading The Undiscovered Mind by John Horgan and for coffee breaks, re-watching the first season of Carnivale.
I am what I eat.
g'night
Posted by lisa at 8:10 PM

You're packages always come with such wonderful lagniappe :) I love the carousel pieces that you've been offering. They're amazing and so inspirational. For right now, I can only look but not touch...hopefully I can remedy that in the future ;)

A nifty word, Chris. I like knowing it, especially since the 'lagniappe' is one of the things I enjoy most about what I do.

I love that poppet driver.

Glad to see more wonderful stuff up on ebay. You are correct in that the rats are a welcome return, I've heard the same from many of your fellow fans in my neck of the woods.

That is great for Mimi Ko. Whenever I click over on to her site and see that first picture of the girl in the red top, I swoon. It is such a beautiful picture. The hue of the color is so incredible. She certainly deserves exposure.